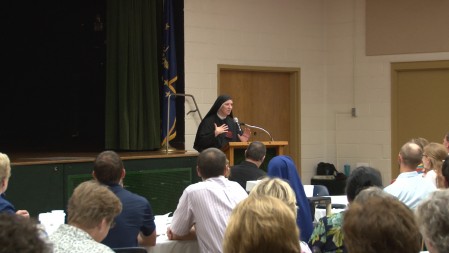 Sister Deirdre Byrne was the keynote speaker at the presentation that followed the White Mass at St. Vincent de Paul Parish in Fort Wayne on Oct. 1. Sister Dede, the religious superior of the Little Workers of the Sacred Hearts order, is a retired Army colonel and an active general surgeon and family practitioner in Washington, D.C.

FORT WAYNE — The first White Mass ever to be celebrated in Fort Wayne for those who work in the healing profession drew a large crowd to St. Vincent de Paul Church on Oct. 1. The celebrant was Bishop Kevin C. Rhoades, who said in the opening of his homily, “It is truly a joy to celebrate this Mass for our doctors, nurses and other health care workers today. … And I am very grateful to the newly-formed Catholic medical guild here in our diocese, the Dr. Jerome Lejeune Guild (of Northeast Indiana). I pray that your mission and activity will promote the holiness of your members and be a great service to the Gospel of Life.”

Bishop Rhoades expanded on the theme of holiness. “God desires holiness for each and every person in each and every walk of life. Christ pours out His grace upon us so we can live a holy life.”

Bishop Rhoades addressed physicians directly by saying that holiness requires more than a gift of their time and their medical talents. It means identification with Christ by imitating Jesus, the divine Physician. It rejects selfish ambition and involves “holy ambition,” which the bishop defined as “seeking excellence in your medical practice; putting God first in your life; and treating every patient, from the tiniest embryo at the beginning of his or her life to the frail elderly person at the end of life, with the love they deserve as beloved children of God.”

Bishop Rhoades spoke directly to nurses as well. “I think of the nurse who loves his or her work and truly cares for his or her patients … the nurse who wants to help each and every one of them in their particular situation.”

“A holy nurse and a holy doctor desires to do every task to the best of his or her abilities,” Bishop Rhoades said.

He cautioned that holiness does not consist only of our prayer life, but in the totality of our lives. “I invite you to see your medical work as a way to heaven. Offer your work to God every morning. See everything you do as a holy act, as an opportunity to give glory to God.”

He encouraged the medical professionals to never allow their faith to be compromised by participating in so-called health services that are immoral, even if promoted by some who have bought into the growing culture of death in society.

“Be apostles of life and witnesses to the sanctity of human life,” he said. “Maybe you’ll experience rejection by colleagues for refusing to prescribe contraception, perform sterilizations or participate in abortions. The Christian on the path to holiness cares more about faithfulness to God’s commands than the affirmation and praise of the world.”

He concluded with this prayer, “May the Lord Jesus strengthen you and all who serve in the medical profession.”

Following Mass and a dinner in the parish community center, Dr. Thomas McGovern, a local physician and president of the Dr. Jerome Lejeune Catholic Medical Guild of Northeast Indiana, welcomed all in attendance. He pointed out that the guild is the first of its kind in the entire state, although others are in formation in Indiana and elsewhere, and that its primary role is the sanctification of its members.

Its mission statement describes it as a physician-led community of healthcare professionals that informs, organizes and inspires its members, in steadfast fidelity to the teachings of the Catholic Church, to uphold the principles of the Catholic faith in the science and practice of medicine.

Dr. McGovern introduced the evening’s speaker, Sister Deirdre Byrne, a Virginia native and a sister in the Little Workers of the Sacred Hearts order. Sister Dede, as she is more commonly known, was raised by daily Mass-going parents in a family of eight children. She credits her parents for her early foundation in the faith. “Parents, never underestimate your effect on your children’s lives,” she reminded her audience.

Sister Dede is a retired Army colonel and an active general surgeon and family practitioner in Washington, D.C. As recently as 2008 she was with the U.S. Army on the Pakistani border where she saw terrible atrocities and incomprehensible violence. Even more recently, in 2010, she took her final vows and entered the convent where she is now a religious superior.

Through various stages on her interesting journey, Sister Dede has remained steadfast as a warrior for life. Just as Bishop Rhoades exhorted his listeners to be apostles of life and witnesses to the sanctity of life, Sister Dede emphasized the need to be strong for Christ in the struggle against today’s culture of death. She went on to relate many instances in which that battle was fought, some more successfully than others.

On one occasion a pregnant mother’s fetus was tested and found to be a Down syndrome child. The mother, in despair, wanted to have an abortion, but Sister Dede intervened, found adoptive parents and persuaded her to give birth to the baby. On another occasion, a young mother suffering from cancer and metastatic disease became pregnant and her doctor recommended an abortion. Even though Sister Dede knew the mother wished to carry her baby to term and advocated for her, the child was aborted when the young woman was comatose and unable to convey her wishes. “We’re in a battle” for life, she acknowledged sadly.

“I encourage you to remain strong” in the fight, she advised the medical community. And she employed the analogy of using oxygen on an airplane during an emergency. First, help yourself, and then help others. That means, she said, first strengthen yourself by deepening your relationship with Christ, and then help your coworkers to do the same. “We have to work together,” to heal the wounds before we can address the problems.

Sister Dede closed with a fitting military reference. “We are God’s field meds” in the battle for life, she said.

Dr. McGovern concluded the evening with a heartfelt invitation to all those medical professionals in attendance to consider joining the Dr. Jerome Lejeune Medical Guild of Northeast Indiana. He noted in a recent article in Today’s Catholic, “The culture of death does not tolerate Catholic beliefs in action. In order to remain true to our faith and to avoid being swallowed up by the secular culture we need to form a vibrant Catholic medical subculture so that we may be affirmed in our vocations to carry Christ with us wherever we go — especially into our hospitals and offices.”