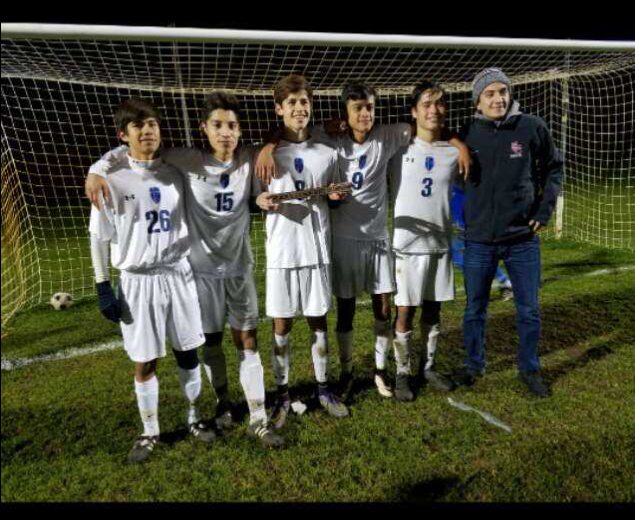 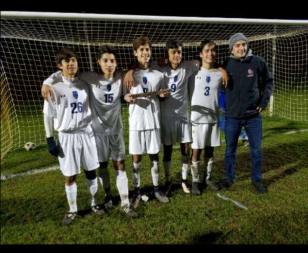 Six current and recent members of the Marian High School varsity boys’
soccer team are family both on and off the field.

Oftentimes, a team is referred to as a family. The squad acts as a single unit working together toward a common goal. For Johnathan Tavarez, Francisco Tavarez, Oscar Tavarez, Alejandro (Alex) Rodela and Junior Ontiveros, the parallels between their family and their athletic team are particularly blurred.

Relatives, the boys are also teammates on the Marian High School varsity boys’ soccer team. And, as the cliché goes, for the Tavarez, Ontiveros and Rodela clan, athletic ability runs in the family. All five boys are key players.

Brothers Johnathan, a junior, and Francisco, a freshman, are first cousins to Oscar, a junior, and Junior, also a junior on the team. Johnathan, Francisco and Junior are second cousins to Alex, a junior. Each one made the varsity soccer team during their freshman or sophomore year of high school — a feat typically reserved for juniors and seniors.

Coach Ben Householter describes their talent of all of the boys as an asset.

“The players from this family have been a real blessing to our soccer team. They all have great skill and understanding for the game,” he said.

Between the five boys and relative Richard (Richie) Ontiveros, who graduated from Marian last year and is currently a freshman at Saint Joseph Rensselaer College, they have secured two class 1-A state championship titles. In 2015, the team finished 20-2, setting a school record for most wins in a season and defeated Indianapolis Cardinal Ritter for the championship title. This year, they beat Providence in the championship game.

Together, the family members scored 25 goals over the course of the 2016 season.

Members of the family also play or have played on the Marian girls’ soccer team as well. Mya Pereira, a sophomore, plays on the junior varsity team and Stephanie Ontiveros, a 2014 graduate, played on the girls’ championship varsity team.

The boys not only have elite athleticism, but a contagious collaborative spirit as well — like loyal family members do.

“Their camaraderie and joy is contagious to the team,” Householter said.

Growing up in South Bend, Johnathan, Francisco, Oscar, Alex and Junior regularly played soccer with each other, something that has given them a strategic advantage on the field.

“I was really born into soccer, because my whole family played and I guess that had a big influence on me,” Johnathan said. “Since we are all around the same age, we grew up playing on the same teams and I feel that this always gave us an advantage over other teams because we knew the style of play that one another had.”

The boys also push each other to get better.

“What I like about them is that they are competitive with me, so during practice we compete and it pushes us to get better,” Johnathan said. “I always wanted to be like my older relatives just because they were so good.”

But the sport of soccer has given these boys more than an athletic advantage. Playing together has brought them closer as a family.

“Family-wise, I know they are always supporting me,” Oscar said.

According to school administration, the boys have a loyal following of family member fans at their games. The faith of the young men is evident as well, and they incorporate it into their play on the field.

“My positive attitude and the help of God helped me contribute in getting the back-to-back state championship,” Oscar said.

Because all five boys will be eligible to play again next year, Marian will continue to have the influence of this family on the field.