“In the beginning, I was young . . . he was handsome. He said I was beautiful, smart, worthy of love . . . made me feel that way. And so we were married, walking joyfully together down a church aisle, our union blessed by God.

“Then came the angry words . . . the verbal tearing apart. . . . Now I was made to feel ugly, unintelligent, unworthy of any love, God’s or man’s.

“Finally came the release, the realization. It’s not me . . . it’s him. . . . I am worthy of love, God’s and man’s. One spring morning, my heart was filled with hope and with fear now only of starting over on my own. And so again I walked . . . down the hallway of our apartment building . . . never again to be silent . . . never again to live with that kind of violence, to suffer that kind of pain. 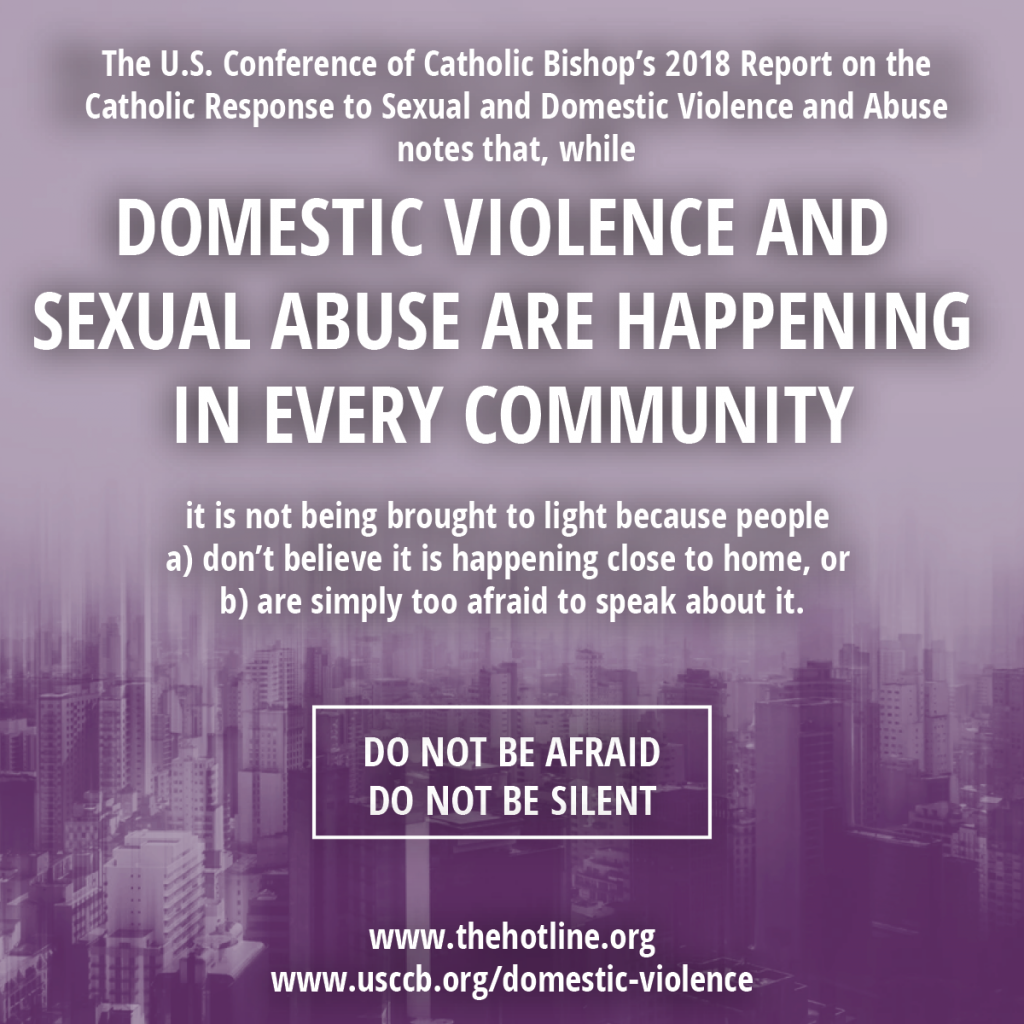 WASHINGTON — As pastors of the Catholic Church in the United States, we state as clearly and strongly as we can that violence against women, inside or outside the home, is never justified. Violence in any form”—physical, sexual, psychological, or verbal”—is sinful; often, it is a crime as well. We have called for a moral revolution to replace a culture of violence. We acknowledge that violence has many forms, many causes, and many victims— men as well as women.

The Catholic Church teaches that violence against another person in any form fails to treat that person as someone worthy of love. Instead, it treats the person as an object to be used. When violence occurs within a sacramental marriage, the abused spouse may question, “How do these violent acts relate to my promise to take my spouse for better or for worse?” The person being assaulted needs to know that acting to end the abuse does not violate the marriage promises. While violence can be directed towards men, it tends to harm women and children more.

In 1992 we spoke out against domestic violence. We called on the Christian community to work vigorously against it. Since then, many dioceses, parishes, and organizations have made domestic violence a priority issue. We commend and encourage these efforts.

Violence against women in the home has serious repercussions for children. Over 50 percent of men who abuse their wives also beat their children. Children who grow up in violent homes are more likely to develop alcohol and drug addictions and to become abusers themselves. The stage is set for a cycle of violence that may continue from generation to generation.

The Church can help break this cycle. Many abused women seek help first from the Church because they see it as a safe place. Even if their abusers isolate them from other social contacts, they may still allow them to go to church.

Recognizing the critical role that the Church can play, we address this statement to several audiences:

— To pastors, parish personnel, and educators, who are often the first responders for abused women

— To society, which has made some strides towards recognizing the extent of domestic violence against women.

We recognize that violence against women has many dimensions. This statement is not meant to be all-inclusive, but rather to be an introduction, along with some practical suggestions, of what dioceses and parishes can do now.

The Church responds to domestic violence:
Scripture and Church teachings

WASHINGTON — Religion can be either a resource or a roadblock for battered women. As a resource, it encourages women to resist mistreatment. As a roadblock, its misinterpretation can contribute to the victim’s self-blame and suffering and to the abuser’s rationalizations.

As bishops, we condemn the use of the Bible to support abusive behavior in any form.

A correct reading of Scripture leads people to an understanding of the equal dignity of men and women and to relationships based on mutuality and love. Beginning with Genesis, Scripture teaches that women and men are created in God’s image. Jesus himself always respected the human dignity of women. Pope John Paul II reminds us that “Christ’s way of acting, the Gospel of his words and deeds, is a consistent protest against whatever offends the dignity of women.”11

Men who abuse often use Ephesians 5:22, taken out of context, to justify their behavior, but the passage (v. 21-33) refers to the mutual submission of husband and wife out of love for Christ. Husbands should love their wives as they love their own body, as Christ loves the Church.

Men who batter also cite Scripture to insist that their victims forgive them (see, for example, Mt 6:9-15). A victim then feels guilty if she cannot do so. Forgiveness, however, does not mean forgetting the abuse or pretending that it did not happen. Neither is possible. Forgiveness is not permission to repeat the abuse. Rather, forgiveness means that the victim decides to let go of the experience and move on with greater insight and conviction not to tolerate abuse of any kind again.

An abused woman may see her suffering as just punishment for a past deed for which she feels guilty. She may try to explain suffering by saying that it is “God’s will” or “part of God’s plan for my life” or “God’s way of teaching me a lesson.” This image of a harsh, cruel God runs contrary to the biblical image of a kind, merciful, and loving God. Jesus went out of his way to help suffering women. Think of the woman with the hemorrhage (Mk 5:25-34) or the woman caught in adultery (Jn 8:1-11). God promises to be present to us in our suffering, even when it is unjust.

Finally, we emphasize that no person is expected to stay in an abusive marriage. Some abused women believe that Church teaching on the permanence of marriage requires them to stay in an abusive relationship. They may hesitate to seek a separation or divorce. They may fear that they cannot re-marry in the Church. Violence and abuse, not divorce, break up a marriage. We encourage abused persons who have divorced to investigate the possibility of seeking an annulment. An annulment, which determines that the marriage bond is not valid, can frequently open the door to healing.