At age 16, Nicholas Becker has already achieved a great deal. He serves as an acolyte at St. Matthew Cathedral in South Bend, spots when his brother Crispin lifts weights, and had a busboy job at Chick-fil-A restaurant before the pandemic shut things down. He has spoken at several area right-to-life events and was elected vice president of his freshman class at Marian High School, Mishawaka, last year. Now he’s a YouTube personality, too.

The sixth of seven children of Rick and Nancy Becker, Nicholas is proud of his siblings who have studied at the University of Notre Dame, Purdue University and Ball State University, and worked in computer science and data management. His married sister is studying library science. Nick is hopeful one of them will make him an uncle someday.

Rick and Nancy met at Franciscan University of Steubenville and moved to the Diocese of Fort Wayne-South Bend when Bishop John M. D’Arcy invited Rick to fill a position in the Office of Catechesis. Inspired by Rose Hawthorne Lathrop, O.P., who became a religious sister and served the poor who were suffering from incurable cancers, he wanted to do something more hands-on and directly involved with people.

Rick earned a nursing degree, worked in oncology and now teaches nursing at Bethel University in Mishawaka. Nancy loves working part-time at Sacred Heart, Notre Dame, where she keeps sacramental records for the crypt parish. She’s also a Notre Dame sports fan, a role she took on partly for the sake of her sons.

Like his brothers and sisters, Nick was born at home. Knowing the Beckers’ pro-life values, the midwife who attended Nick’s birth gave them time to get to know their new son before confirming that he had Down syndrome. But in this large family there was plenty of love to go around; in fact, when Nicholas’ younger sister Katharine arrived, the five older children were a tad disappointed that she didn’t also have special needs.

Except for heart surgery that was performed on him at a year old, Nick has been strong and healthy and is very articulate. When he reached school age, the principal at St. Matthew Cathedral School encouraged Rick and Nancy to enroll Nicholas there, and he became something of a pioneer for diocesan efforts to fully to integrate students with disabilities. He subsequently followed his siblings to Marian, where he is enrolled in the Bernadette Scholars program. 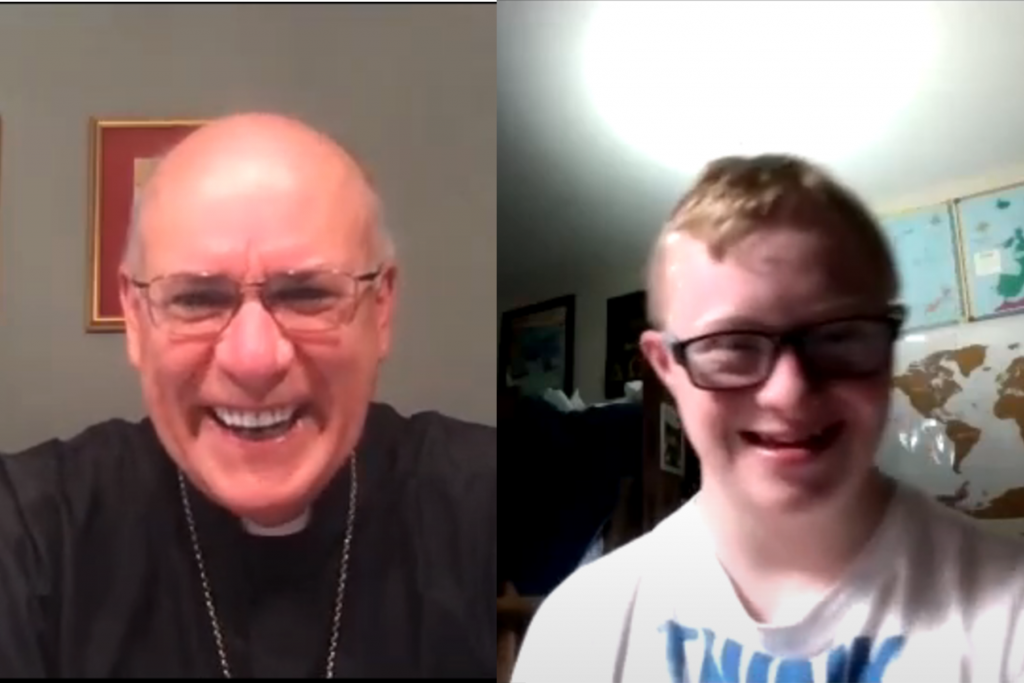 Screenshots from YouTube
Bishop Kevin C. Rhoades, left, laughs with Nicholas Becker as Nick interviews him remotely in early August about the feast of the Dedication of the Basilica of St. Mary Major. To keep himself occupied during the pandemic, the student at Marian High School, Mishawaka, created a YouTube channel on which he shares fun facts about Catholic saints and feast days.

On his own initiative, during the pandemic, Nick started a private Facebook group to which he posts almost every day. Sometimes he proclaims the readings from the day’s Mass and offers insightful commentary, something he’s been known to do since he played Mass as a child.

Nick has recently created a YouTube channel, “Fun Facts About Saints,” to which, as often as possible, he posts interviews with someone about the saint of the day. His dad or a family friend in appropriate garb are frequent guests. So he was excited but only a little nervous, he said, when an opportunity came up to talk to Bishop Kevin C. Rhoades about the Aug. 5 feast of the Dedication of the Basilica of St. Mary Major. The virtual interview posted Aug. 5 and has more than 200 views.

Nurturing his faith through personal prayer, the sacraments and a family rosary are important to Nicholas. “I believe someone out there really loves me, and that makes my faith grow,” he testified. His hero is St. Joseph, whom he chose as his confirmation saint last year, and he also admires Pope St. John Paul II.

Nicholas’ ambition in life is to be an actor, like the pope. He has been in several plays in grade school as well as “Shakescenes” at Notre Dame and was disappointed when he didn’t get to act in “Curtains” at Marian in the spring because the schools closed. A self-taught drummer, he likes to make music – something he practices with his dad and brother on bass and guitar. Along with his new Facebook and YouTube presence, the activities have allowed him to stay busy and continue developing his interests and skills during the hiatus in his school career.