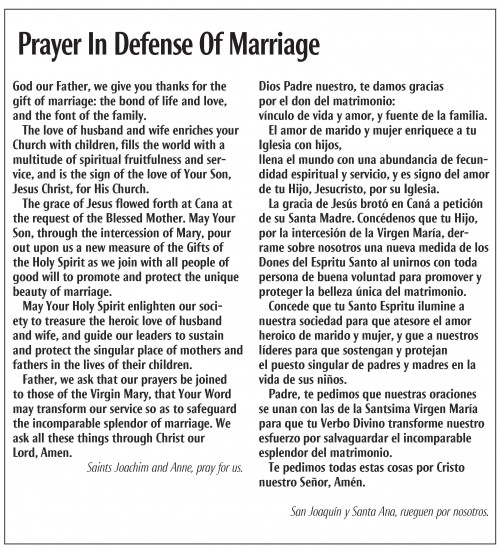 A year or so ago, I wrote a column in Today’s Catholic on defending the truth about marriage. It is important to write again about this very important matter as the Supreme Court is considering the constitutionality of the Defense of Marriage Act as well as that of California’s Proposition 8.

There is much heated debate in our country about this issue as some seek the redefinition of marriage to include unions of persons of the same sex. Proponents of so-called “same-sex marriage” have framed the issue as one of equality and justice. With love and respect for our brothers and sisters with same-sex attraction, the Church affirms that marriage, by its very nature, can only be between a man and a woman. This is not only a teaching of faith, but a fundamental truth that precedes and transcends cultures and religions.

This whole debate should center on the fundamental question: “What is Marriage?” Proponents of the redefinition of marriage seem to identify marriage as simply a bond between two persons who wish to share their lives together, as essentially an emotional union. They want this sharing of life and love to be recognized as marriage with all its attendant legal benefits.

True marriage, however, is more than a consensual relationship between two adults who wish to share their lives together. By its very nature, marriage is conjugal, that is, it has a bodily as well as an emotional and spiritual bond. There is an excellent book that I highly recommend which explains the conjugal view of marriage as distinguished from the revisionist view. It is entitled: What Is Marriage? Man and Woman: a Defense, by Sherif Girgis, Ryan T. Anderson, and Robert P. George, published by Encounter Books.

This book explains how “marriage is, of its essence, a comprehensive union: a union of will (by consent) and body (by sexual union); inherently ordered to procreation and thus the broad sharing of family life; and calling for permanent and exclusive commitment.” It is “a human good with an objective structure.” Marriage is more than emotional union and cohabitation. It is inherently connected to bodily union and family life.

Marriage is a unique union. Male-female complementarity is intrinsic to marriage. It is naturally ordered toward authentic union and the generation of new life. These are essential attributes of marriage, not incidental or relative.

Proponents of marriage redefinition, as I mentioned, claim that legalizing same-sex marriage is a matter of justice and equality. But the promotion and protection of marriage as the union of one man and one woman is itself a matter of justice. As the U.S. bishops state: “It would be a matter of grave injustice if the state ignored the unique and proper place of husbands and wives, the place of mothers and fathers, and especially the rights of children.” We believe the state must not deprive children of the right to a mother and father.

Archbishop Thomas Wenski of Miami recently wrote the following: “Same-sex marriage has been advanced as a cause for equality — by providing the benefits to homosexual couples that have been afforded historically to married heterosexual couples. Not to give these benefits is alleged to be discriminatory. Or course, as fair minded citizens we do hold that no one should be denied a job or a house; no one should be subjected to harassment or discrimination. But, that the state recognizes and favors the marriage of one man and one woman as a natural fact rooted in procreation and sexual difference is in no way unjust to homosexual couples any more than it is unjust to heterosexual couples who cohabitate without the legal benefits and protections of a civil marriage.”

Blessed John Paul II once explained “how incongruous is the demand to accord ‘marital’ status to unions between persons of the same sex. It is opposed, first of all, by the objective impossibility of making the partnership fruitful through the transmission of life according to the plan inscribed by God in the very structure of the human being. Another obstacle is the absence of the conditions for that interpersonal complementarity between male and female willed by the Creator at both the physical-biological and the eminently psychological levels.”

Unfortunately, those who promote the truth about marriage are often characterized as bigots, homophobic, and intolerant. This is not fair. As Catholics, we affirm that homosexual persons are to be fully respected in their human dignity. This is a moral duty. This duty, however, does not justify the recognition of a right to marriage between persons of the same sex and its being considered equivalent to the family.

Our United States Conference of Catholic Bishops has affirmed the urgency of opposing efforts “that undermine marriage as the permanent, faithful, and fruitful union of one man and one woman and a fundamental moral and social institution essential to the common good.” We have called upon our legislators, especially those who are Catholic, to uphold the family built upon marriage between a man and a woman. This is a grave responsibility. It is deeply saddening and disappointing when a Catholic legislator makes public policy choices in opposition to our fundamental moral teachings on human life, marriage, and other preeminent issues.

When he was Archbishop of Buenos Aires, our new Holy Father, Pope Francis, vigorously opposed the redefinition of marriage in Argentina. He encouraged the faithful to protest against legislation that eventually made Argentina the first Latin American country to legalize same-sex marriage. Following our Holy Father’s example, I encourage you to contact our legislators to express support for the defense of marriage and to oppose its redefinition. I also encourage you, most of all, to pray. Pray especially for our Supreme Court, that it will uphold Proposition 8 and the Defense of Marriage Act, thus respecting the very nature of marriage as the union of one man and one woman.

May the Blessed Virgin Mary and Saint Joseph intercede for our country that it may safeguard the truth of marriage and the good of the family!