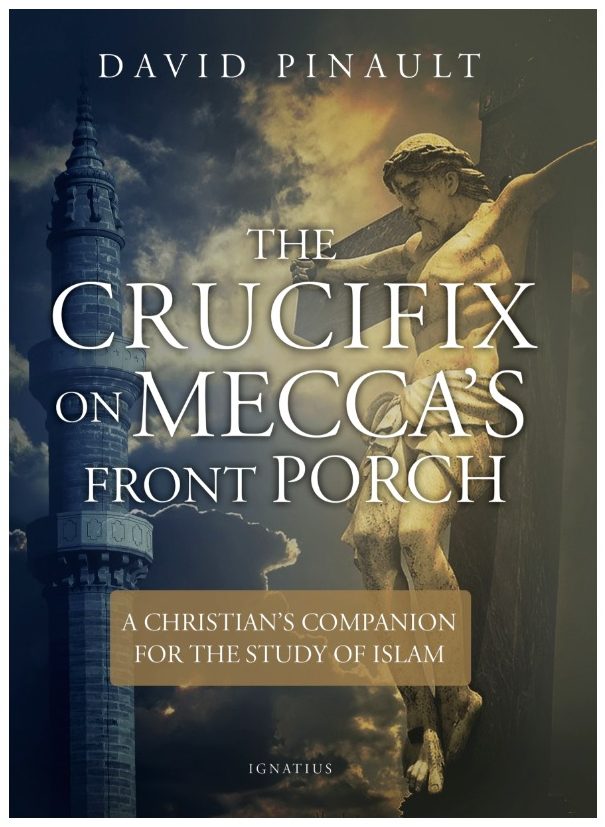 David Pinault is a Catholic Christian who has spent his life studying Islam. In his book “The Crucifix on Mecca’s Front Porch: A Christian Companion for the Study of Islam,” he maintains that the study of Islam can help us better appreciate our Christian faith. Why?

In large part, it’s because we can see the goodness and beauty of the Christian faith more clearly by contrast with Islam. True, Pinault acknowledges that Muslims worship the same God as Jews and Christians do, the creator of the universe, under the name of Allah. But he must also acknowledge many stark contrasts between historic Muslim and Christian faith and practice — beginning with Muhammad himself, the founder of Islam. Here are a few examples brought forth by Pinault from Muhammad’s life and teaching.

Far from doing no evil, like Jesus, Muhammad started committing robbery and murder in the name of Allah fairly early on. Far from bearing insults patiently and praying for his persecutors, as Jesus did, Muhammad was especially concerned to behead anyone who mocked or satirized him — showing himself too much like “the devil, the proud spirit,” who “cannot endure to be mocked,” in St. Thomas More’s words.

Far from sacrificing himself for love of sinners in expectation of rising to eternal blessings, as Jesus and the saints have done, Muhammad denied both the Crucifixion and the Resurrection, and threatened those deemed sinners with torture in both this life and the next if they failed to submit to Allah’s alleged requirements. Far from being always faithful to his word, like God and His only begotten Son, Muhammad contradicted himself in the Koran on such important points as whether Jews and Christians were or were not idolaters, and whether Muslims should or should not try to exterminate them.

The deepest contrast between Christianity and Islam, Pinault maintains, is found in the cross. God Himself, Christians believe, humbled Himself out of love for us, His creatures. To save us from sin and death, He became a man, suffered and died on the Cross, and rose again. Allah, according to Muhammad, would never do a thing so far beneath his dignity, and the worst among the Muslims regard it as blasphemy — punishable by death — to suggest that he would.

Muhammad also thought it abominable to attribute “helpers” to Allah. Christians believe that God became man to unite us with Himself as not only helpers but friends — sharing His sufferings in His mission of salvation, becoming like Him as children of His Father, and spreading His charity to all throughout the world. So great is the unity of God with His helpers, His friends, that Christians — unlike Muslims — dare to proclaim, “Blessed be God in His angels and in His saints!”

In view of such extreme contrasts, Pinault understandably takes a dim view of those who try to promote interreligious harmony by minimizing the differences between Christianity and Islam. On the other hand, he is not among those Christians who declare that the most fanatical and violent interpretation of the Koran is the correct one, and therefore there can be no reconciliation at all between Christians and Muslims. Why not?

The short answer is that he knows too much about Islam and has seen too many Muslims who are not violent fanatics. He knows that the Koran is self-contradictory: For example, it contains passages indicating that Islam is indeed a religion of peace and tolerance, in addition to others indicating the opposite. All Muslims, so long as they remain Muslims, must regard some of these passages as canceling out those that contradict them, but they differ as to which ones are canceled and which ones remain valid.

It follows that Christians should engage in no senseless disputes about whether Islam is essentially a religion of peace and harmony or one of war and violence. Neither view is wholly true; both are true in part, but true of different versions of Islam.

Pinault makes it clear, in detail, that there are many widely different versions of Islam — as one would expect. Islam, like Protestantism, has a sacred book but no single authority to interpret the book. Schisms therefore arise from different interpretations of the same book. Some parts of the Bible may seem difficult, but are not impossible, to reconcile with other parts -— and yet different sects claiming to rely on the Bible cannot agree. The Koran contains some passages that literally contradict others; it is only to be expected that those who claim to rely on such a book will greatly disagree among themselves.

What does this mean for the future of relations between Christians and Muslims? Guess what: It means different things in relation to those who adhere to different versions of Islam.

Some are ruthless fanatics who seek to oppress Christians, to force them (if possible) to convert to Islam, or simply to terrorize or kill them. Christians must love their enemies but must recognize that Muslims of this kind are indeed enemies, and should strive to free all people from their grip.

Some eschew violence but engage in forms of “da’wah” or Islamic “evangelization” that unfairly misrepresents Christian teaching in contrast to Islam. These should be met with the whole truth, both about those points on which Christians and Muslims agree and those on which they disagree.

And then there are those, beloved of Pope Francis and many others, who sincerely wish to be fair to Christianity and even to engage in beneficial dialogue with Christians. Are these the only true Muslims? Of course not. Are they true Muslims? Yes, as true as any others, Pinault would say, though not as slavish in following their founder’s bad example.

“As soon as men begin to be fair to the Church,” G.K. Chesterton said, “they begin to be fond of her.” Muslims are not immune to the goodness and beauty of Christianity and the Church. May those among them who are fair and respectful to the Church become fond of her, and ultimately change their loyalty from Muhammad and the Koran to the Son of God incarnate?

Things almost as strange have happened. Once upon a time, where Calvinism (originally a dismayingly Islam-like form of Protestantism) was in control, Catholics were oppressed and the Mass was prohibited as being supposedly idolatrous. Today, Calvin’s various successors may honor his memory, but don’t follow his bad example — and more than a few of them have become Catholic. With faithful effort and a lot of prayer from Christians, something like this may happen much more widely among Muslims too — especially where fanatics are not permitted to execute them for alleged apostasy, merely for recognizing that the same God they wish to serve has become a man to save us.

David McClamrock is a Catholic convert, a graduate of Thomas Aquinas College and The Law School of the University of Notre Dame, and a Hoosier lawyer.