When Kenya native Mercylynn Mbuguah and her family came to America 12 years ago, they experienced something of a culture shock.

“Our family won the green card lottery to come to the United States as permanent residents,” explained Mbuguah, who is from a rural area near a small town called Ol’kalou. “My parents wanted a better opportunity for my brother and me, especially the attainment of a good education. We arrived here in January 2006, when I was just 10 years old.”

Mbuguah’s family consists of her parents, Steven and Felistus, and her brother Martin, now 16 years old. Bringing little more than four suitcases, the family arrived by plane, which took about two days, including layovers. The family members were greeted by a Midwestern snowfall when they reached their destination in Fort Wayne.

“When we first arrived, we underestimated how cold winter would be because in Kenya, it never gets that cold and it doesn’t snow,” said the recent Northwestern University graduate and campus missionary at Northern Illinois University. “We were awed by how beautiful the snow looked and how fluffy it seemed. My brother, who was 4 at the time, was afraid to step on it, so he asked my mother to carry him when they were coming home from the daycare center.” 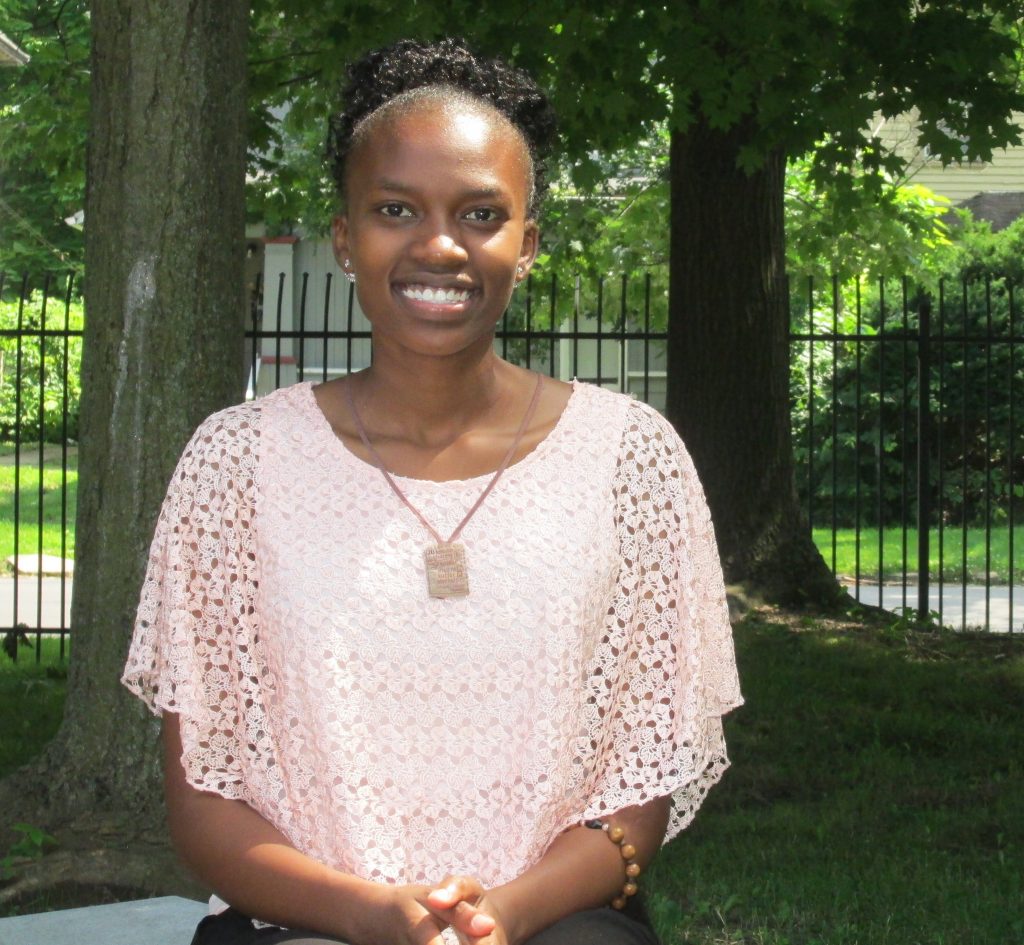 Mercylynn Mbuguah, a native of Kenya who emigrated to Fort Wayne in 2006 with her family, is excited to have entered the mission field. She is preparing to minister to Northern Illinois University students. She and her family are members of St. Patrick Parish. — Barb Simienski

For a while, the family did not leave the house because of how cold it was. They would see the sun come out and expect it was getting warmer, she said, only to realize Northern Indiana winters are long. “To this day, the cold weather was the hardest thing to get used to here.”

Both of Mbuguah’s grandparents were devout Catholics, and they raised her parents in the faith. Through her parents, she was introduced to it. A friend who hosted the family for a few months after they arrived lived close to St. Patrick Church, so the Mbuguahs began attending there. The house they bought was also near St. Patrick, so they have remained members of the parish.

Mercylynn and Martin had learned English while in their home country. Their parents were her role models, said Mbuguah proudly.

“Through their hard work, devotion to God and self-giving love they inspire me to be a good person who tries her best to make a positive impact on our world. They really are amazing people.”

Martin will be a junior at South Side High School and is an award-winning artist. He was recently chosen to be the face of the Scholastic Artist competition, with his work displayed in the Fort Wayne Museum of Art, according to Mbuguah.

“For Martin, art is more than a hobby; it’s a voice God has given him, to reach all people. In his art he is able to highlight the beauty of each person, as he draws the audience into the person’s story and life experience. He wants to pursue art as a career.”

Mbuguah has also been inspired by the Little Way of St. Thérèse of Lisieux and tries to live it out through the words of St. Mother Teresa, seeking to “do small things with great love.” “The Little Way gives me hope that one day, through the grace of God, I will become a saint,” she hopes.

Mbuguah, whose degree was a Bachelor of Science in communication, has begun a campus missionary job at Northern Illinois. She will work with students when school starts in August.

“As missionaries, we work to engage students through different outlets such as leading Bible studies and small groups, meeting students one-on-one, organizing retreats and planning events on campus which allows us to speak with students who may not otherwise come to the Catholic Newman Center,” said Mbuguah.

“I will be a full-time missionary, so I won’t be working at another job or taking any classes at Northern Illinois. This is our main work, which is why we fundraise to aid this mission.”

It wasn’t until she began her undergraduate studies at Northwestern that she made her Catholic faith her own, though.

“I made the choice to remain Catholic not simply because my parents were Catholic, but because I found the fullness of truth through this faith.”

“Through the guidance of a FOCUS campus missionary at the Sheil Catholic Center, I rediscovered and fell in love with Jesus and His most holy Catholic Church. My faith matured at the Catholic Center as I began to learn more about my faith though the Catholic Scholars Program. In this program, we took classes in moral theology, liturgy, the Bible and participated in service trips and retreats.

“I also began to be more active in the Church by leading the rosary and Chaplet of Divine Mercy after daily Mass, as well as advertising and planning Bible studies for students. After graduating in 2017 I lived with the Carmelite sisters in Terre Haute for a few months as I discerned my vocation. Through this experience, I continued to grow in my deep love for Jesus and His Church. As I begin my journey as a campus missionary, I desire to help students encounter Jesus through the Gospel and His mystical body, the Church.”

The joy Mbuguah has for her faith is one that cannot be contained within her, she said. “(It) must be spread to all souls through the grace of God.”