On Sunday, Sept. 18, more than 30 couples gathered at St. Matthew’s Cathedral in South Bend to celebrate special wedding anniversaries. About a quarter of these couples celebrated a particularly momentous milestone: 60+ years of marriage.

Theresa and Chester Dlugosz celebrated 65 years of marriage as part of the Mass. The couple, who met at a friend’s birthday party, have five children. Several children and/or their spouses were able to attend the Mass. “It (the Mass) was wonderful,” Theresa said. For Theresa, celebrating this 65-year anniversary was important. “I think that’s such a special thing to do,” she said. “We celebrate so many things and celebrating marriage should be one of those things.”

In particular, celebrating this anniversary with a Mass was significant for the Dlugoszs given the impact faith has had on their marriage. “There’s always tough times, death and things of that nature,” Theresa explained. “But if you have your faith, it keeps your mindset in the right direction.” 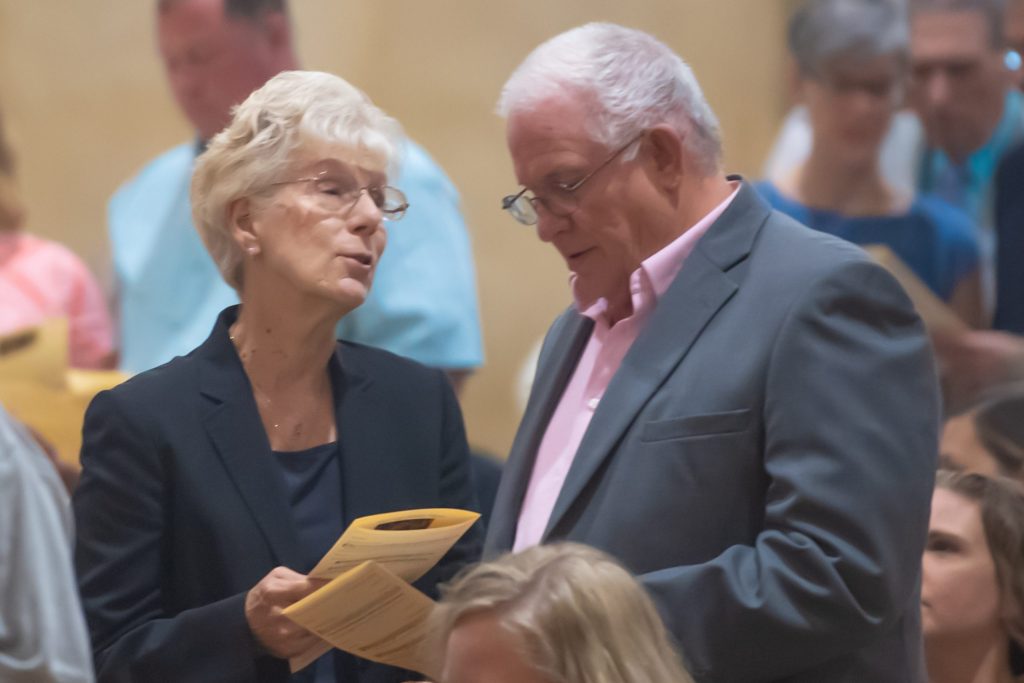 Photos by Bob Krizmanich
An anniversary couple participates in the liturgy at a Mass celebrating milestone wedding anniversaries ranging from 25-70 years held on Sunday, Sept. 18, at St. Matthew Cathedral in South Bend.

Another couple, Herb and Carol Younger, celebrated 60 years of marriage at the Mass. The Mass homily delivered by Bishop Kevin C. Rhoades really impacted the couple’s experience. “The joy with which he talked, that really touched both Herb and me,” Carol explained. The couple, who met on a blind date in 1962 and were married shortly thereafter, recognize God’s impact on their marriage. “His hand is really real in our lives,” Carol said. 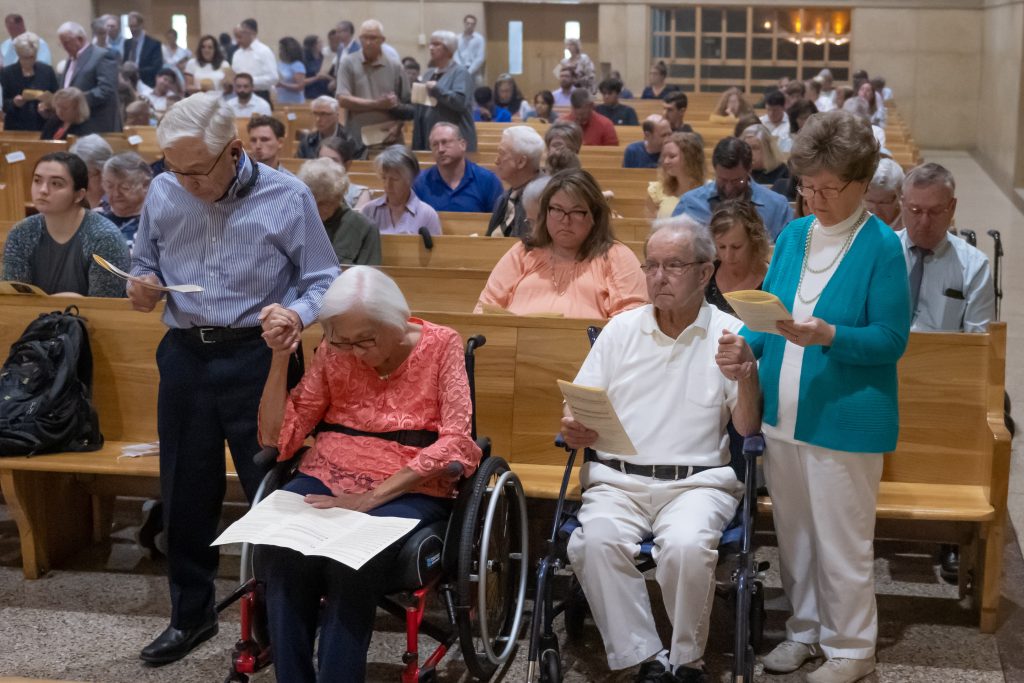 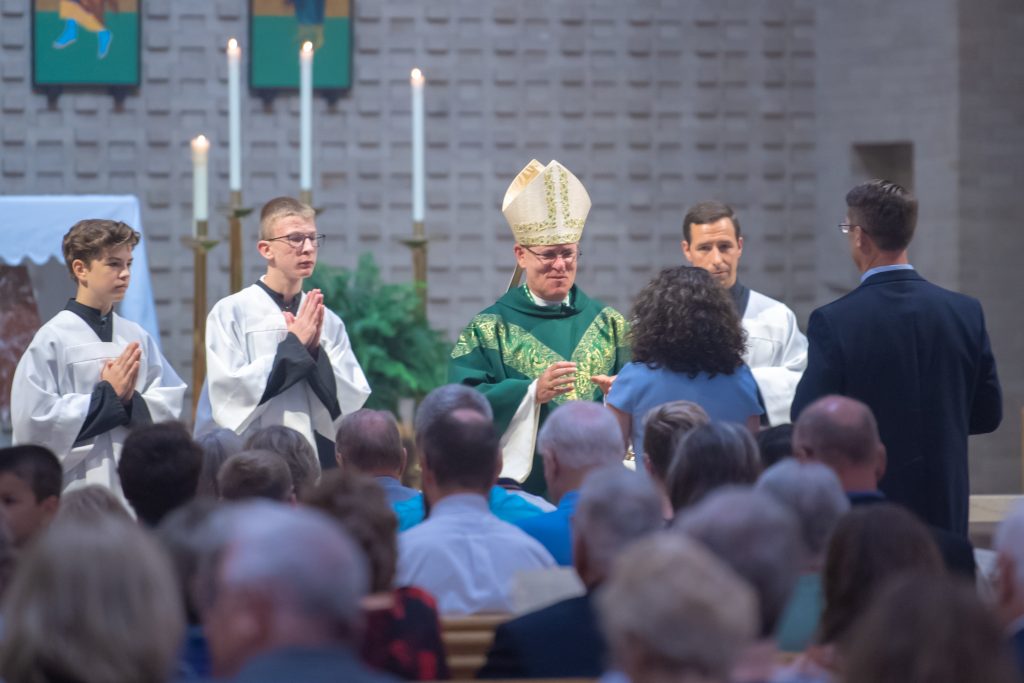 Nancy and Merwyn Kusnierek, married 60 years, found the Mass to be a great way to celebrate their anniversary, particularly because the Mass gave them the chance to celebrate amongst like-minded couples. “Nancy and I both appreciated the opportunity to share our togetherness with 35 other like-minded celebrants,” said Merwyn. “And it did reawaken our intense desire to not only remain married for life, but to continually offer ourselves to our partner as manifestation of our love just as Christ offered His body for His spouse, the Church.”

The Mass celebration itself inspired the couple in several ways. “We were reminded that no matter how we defined love before, we need to think of and remind ourselves that God is love and he who abides in love abides in God,” Merwyn went on to say. “Bishop then offered this concluding advice that I know will surely make a difference for us … ‘Remember that there are never too many May Is, Thank yous, and I am sorrys.’”

Also present were those celebrating more than 65 years of marriage. “We met a couple that had us beat by a few years,” Theresa Dlugosz said. “I believe they were married for 70 years.”

One couple, Beth and Jerry Horban, who celebrated 40 years of marriage at the Mass drew inspiration from the many around them celebrating 60+ years of marriage. “A gentleman who had shared with me his secret to 60 happy years of marriage said he always got the last word, (which was) ‘yes dear’,” Beth said. “To him, happy wife, happy life.”

Jane and Marty Murphy who also celebrated 40 years of marriage, like Beth and Jerry, realized the significance of those celebrating 60+ years of marriage at the Mass. “We recognize that celebrating 60 or more years would be a great blessing,” Jane said. “My parents did achieve that milestone, yet we know that it should not be taken for granted. We can simply trust in God’s providence!”

For Tony Procaccino, who celebrated his 60th wedding anniversary with wife Norma and planned to attend the Mass, it’s about leaning on virtues like patience and trust in his marriage. “Give and take, patience and trust!” he said when asked what the key is to a successful 60-year marriage.

These are also attributes for which he admires Norma. “Her complete thoughtfulness for not only our family unit, but for friends and complete strangers,” he said. “Her appreciation by giving to others for small gestures for what they have done to make our lives easier and no matter the circumstance.”

After 60 years or more of marriage, God continues to be a source of strength for these and other coupes celebrating such a milestone. As Merwyn put it, “He (God) has answered our prayers for 60 years so far and we count on His help for the rest of our married life”

A second diocesan Mass for couples celebrating 25, 40, 50, 60, 65, and 70 years of marriage will take place on Sunday, Oct. 9, at 11:30 a.m. at the Cathedral of the Immaculate Conception, Fort Wayne. To register, visit www.diocesefwsb.org/Anniversary-Masses.