“I believe we need a habitat on the moon just like we have scientists living at the North and South Poles,” Kranz said, a parishioner at Shrine of the True Cross Catholic Church in Dickinson, Texas. “The challenge of a long-term facility and learning to use the resources of the moon is needed for scientific and economic objectives, not political reasons. It needs to be a world project.”

Still in the Houston-area, at age 85, Kranz remains a very busy man. During his 34 years with NASA, he directed the Gemini and Apollo programs, including the first lunar landing mission of Apollo 11. Now Kranz has been at the forefront of celebrating the 50th anniversary of man’s touchdown on the moon July 20, 1969.

He has shared his experiences in making history and dreams for the future in speaking to multiple community and business groups and at NASA’s Johnson Space Center events. He is scheduled to address the Archdiocese of Galveston-Houston’s upcoming Prayer Breakfast July 30 in Houston.

Asked whether he ever wished that he’d flown into space himself, the aerospace engineer and retired fighter pilot said, “In the very early days of the Mercury program, astronauts would be limited to doing one or two missions. I’ve been involved, in various capacities, with 100” missions, up through the Shuttle missions.

With each Apollo spacecraft’s successful splashdown, Kranz could breathe a sigh of relief and offer a prayer of thanksgiving. 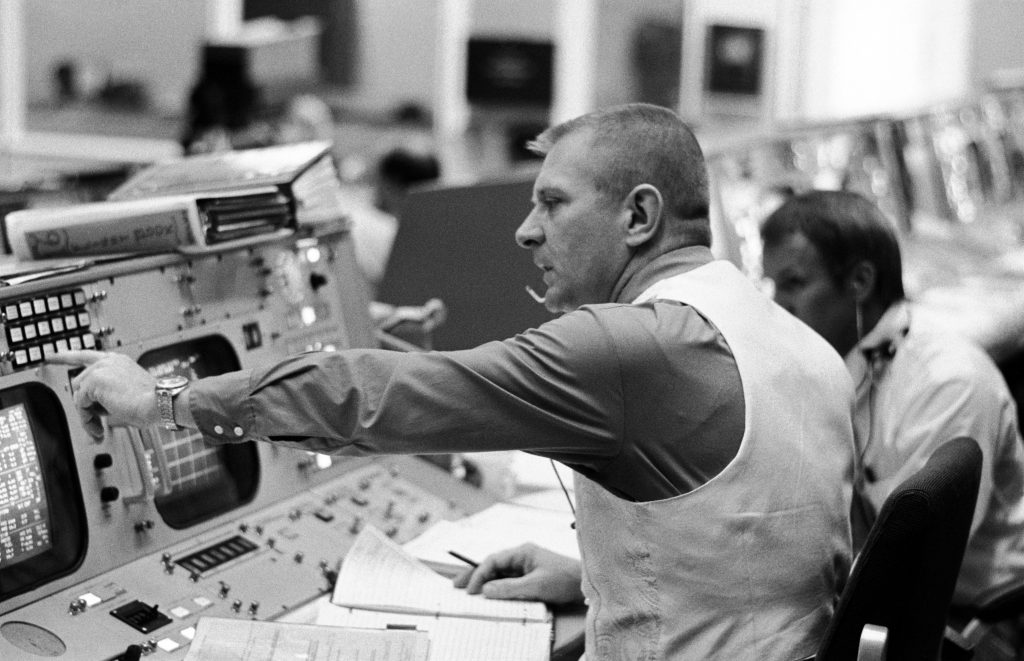 Flight director Gene Kranz is seen seated at his console in the mission operations control room in the Manned Spacecraft Center’s Mission Control Center in Houston the launch of the Apollo 11 lunar landing mission July 16, 1969. Partially visible in the background is flight director Gerald D. Griffin. Kranz is a parishioner at Shrine of the True Cross Catholic Church in Dickinson, Texas, near Houston. (CNS photo/courtesy NASA)

Following the fatal tragedy that claimed the lives of three NASA astronauts during a dress run of Apollo 1, Kranz told his team at the Manned Spacecraft Center in Houston: “From this day forward, Flight Control will be known by two words: ‘tough’ and ‘competent.’ ‘Tough’ means we are forever accountable for what we do or what we fail to do,” he said. “’Competent’ means we will never take anything for granted.”

That commitment remained a hallmark of his storied career, especially highlighted in his efforts to safely bring the Apollo 13 crew back to Earth. Kranz was the lead flight director during the Apollo 13 mission.

The hit film “Apollo 13” chronicled Kranz’s work to devise the plan at NASA’s Mission Control that would safely bring the ship and its crew of three astronauts, Jim Lovell, Jack Swigert and Fred Haise, home after its oxygen system failed. Actor Ed Harris portrays Kranz in the award-winning film, which was directed by Ron Howard.

Of the effort, Kranz said, “It wasn’t about me; it was about the teams and the people in Mission Control. We truly believed that, in our line of work, failure is never an option.”

“It involves team-building and respect that goes both ways,” Kranz said. “Integrity is really the driver.”

In discussing current plans to send astronauts back to the moon by 2024 and Mars in the 2030s, Kranz said, “We have a marvelous array of technology and a gifted group of young trained individuals. What we need is leadership and support from the top.” 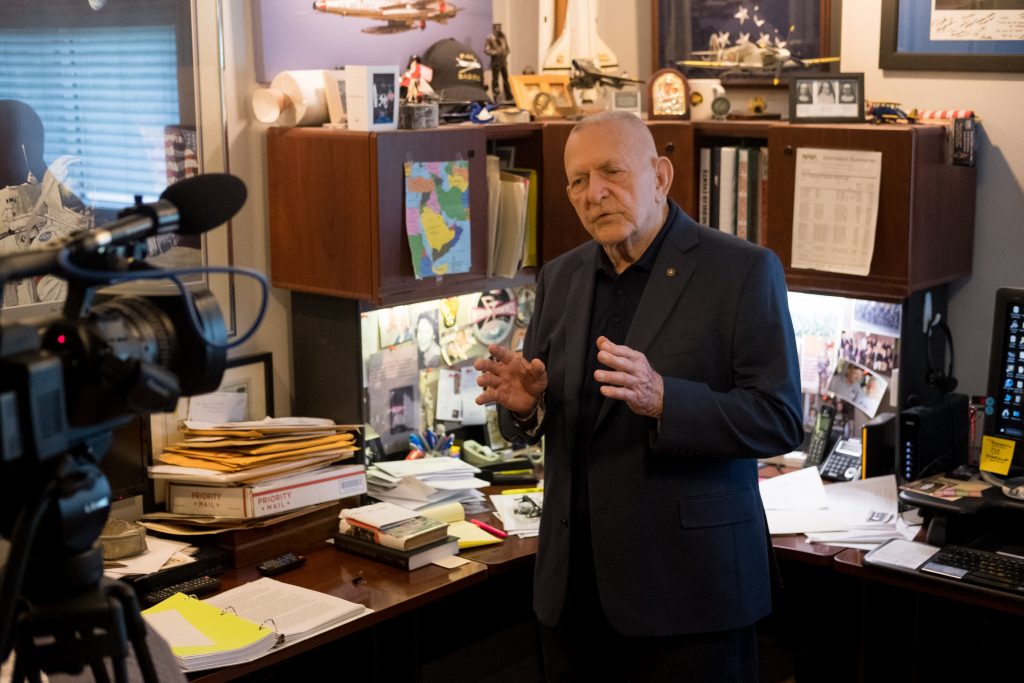 Gene Kranz is seen during a May 17, 2019, video shoot in his Dickinson, Texas, home. Kranz, flight director for Apollo 11, is a parishioner at Shrine of the True Cross Catholic Church in Dickinson, Texas, near Houston. (CNS photo/James Ramos, Texas Catholic Herald)

Kranz also helped spearhead a recent effort to restore NASA’s Apollo Mission Control Center, located at Johnson Space Center in Houston, to its exact appearance. Debuted in June ahead of the 50th anniversary of the Apollo 11 moon landing, the restored center features $5 million of full restoration.

The restoration features original artifacts that were cleaned and restored, or items recreated based on original samples, according to a NASA news release, including paint colors, carpet, coffee mugs and even ashtrays, all placed just as they were 50 years ago.

In a Space Foundation survey in 2010, Kranz was listed second among space heroes who inspired the public, only behind No. 1 pick astronaut Neil Armstrong, the first human to set foot on the moon.

In 2007, NASA awarded Kranz the Ambassador of Exploration Award during a presentation ceremony at Central Catholic High School, where the award, a lunar moon rock sample collected by Apollo 16 astronauts, remains today. Central Catholic is the only high school in the world with a lunar rock, said Kranz.

Taught and mentored by men and women religious throughout his education, Kranz is a 1951 graduate of Central Catholic. The award recognizes the sacrifices and dedication of the Apollo, Gemini and Mercury astronauts.

The moon rock is encased in Lucite and mounted for public display at the school as inspiration to a new generation of explorers who will help return humans to the moon and eventually travel on to Mars and beyond. The rock is part of the 842 pounds of samples collected during the six Apollo lunar expeditions from 1969 to 1972, according to NASA records.

An inscription describes the rock as “a symbol of the unity of human endeavor and mankind’s hope for a future of peace and harmony.”

Kranz retired from NASA in 1994 after 37 years of federal service. He and his wife, Marta, are the parents of six children, and reside in Dickinson, where he is also a member of the Knights of Columbus Father Roach Council No. 3217.

Kranz may be one of the few Catholics ever immortalized as a LEGO mini-figure. As part of a collector’s set featuring Apollo 13 astronauts, a two-inch representation of Kranz sports his trademark high and tight haircut and white vest. He’s depicted holding a tiny version of the Apollo 13 flight plan. A London-based company, MiniFigs.me, created the set, as well as the only other featured Catholic, a Pope Francis mini-figure.

Zuniga and Ramos are on the staff of the Texas Catholic Herald, newspaper of the Archdiocese of Galveston-Houston.