In Acts 2:42, the early Christian community is described as “devot[ing] themselves to the teaching of the Apostles and to the communal life, to the breaking of the bread and to the prayers.”

Such a life sounds idyllic. But in the 21st century, it might seem possible only for those in religious orders.

Four young women in Indianapolis would disagree. They live in FIAT Women’s Formation House, a home for Catholic women ages 18-35 who, according to its website, seek “to live in intentional community with Catholic women who inspire [each other] to grow and live in faith.”

Their story begins with 27-year-olds Corinne DeLucenay of St. Malachy Parish in Brownsburg, and Perry Langley of St. Joan of Arc Parish in Indianapolis.

“Corinne and I lived in an apartment here [in Indianapolis],” explained Langley, who works as an ecclesiastical notary in the archdiocese’s metropolitan tribunal. “But we both had a desire for living in an intentional community.”

“It helps you grow as a person and in holiness,” says Langley of living in a formation house. “When you live and share with others, you can grow in Christ. It’s seeking life in Christ and knowing other [women] have that in mind as well.” 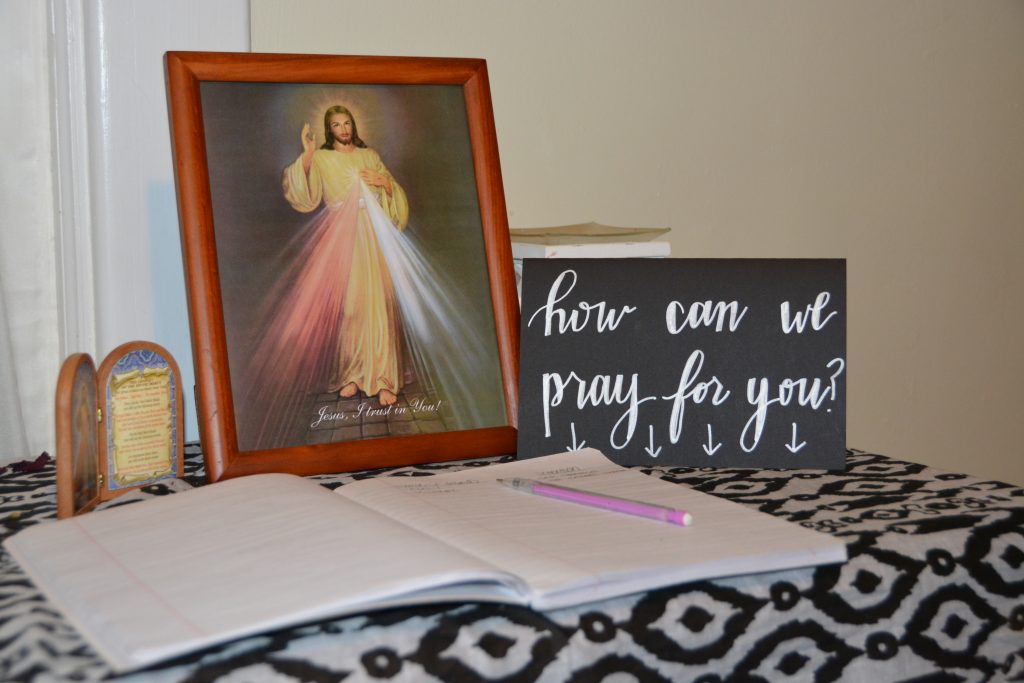 Religious images and a request for prayer intentions greet visitors to FIAT Formation House for Women in Indianapolis. — The Criterion/Natalie Hoefer

“When I moved back to Indianapolis three years ago, I tried to form authentic relationships,” she said. “But being a young professional can make it difficult.

“Proverbs 27:17 says that ‘iron sharpens iron.’ It’s that accountability. As an island, we don’t grow to our full potential. How can you love others better? Hold them accountable in being saintly in their relationships and prayer.”

The two discussed and prayed about their desire to again live life in intentional community.

In January of 2018, they sought and received approval from the archdiocesan Office of Young Adult and College Campus Ministry to start a women’s formation house affiliated with the office. 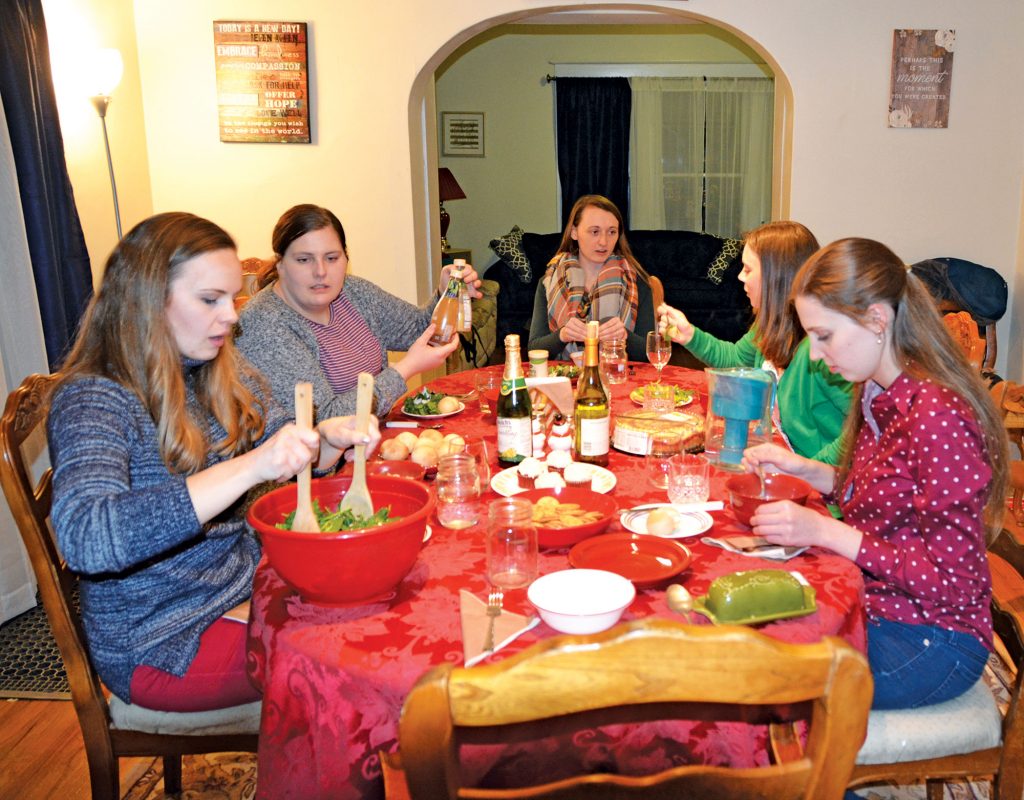 And so the planning began.

‘Radical love’ and the ‘vocation of woman’

Madison Kinast, assistant director of the office, met monthly with Langely and DeLucenay. Brea Cannon was called upon to assist. She had lived in a women’s formation house in Tennessee, and helped devise a mission, vision and “way of life.”

“The ‘way of life’ is a day-to-day process,” explained Cannon, a 28-yearold married mother of one toddler and a member of St. Joan of Arc. “Each woman has a role [to play in the house] and a desire for spiritual and communal life, and what that looks like.

“It’s modeled after a mix of certain religious communities. By having a ‘way of life,’ no matter who lives in the community, it adds constancy and sustainability.”

For instance, members must be practicing Catholics and an active member of their parish. Each must take on a particular role for a year to help in the functioning of the community. The group enjoys a communal meal and fellowship on Mondays, has a house meeting each week and rotates chores bi-weekly.

Each woman must also agree to live out the community’s four pillars: prayer, to draw closer “to Love itself” in order to be Christ to others; service, to offer a “tangible expression of love”; authentic relationship, to “will the good of the other by encouraging life with Christ”; and hospitality, to fully open “one’s heart to what has been entrusted to her.”

The pillars form the practical foundation of the formation house’s vision and mission. That vision is to create “a community of women who inspire virtue,” with a mission to “foster radical love by intentionally living out the vocation of woman” as described by holy giants like St. John Paul II, St. Pius X, St. Teresa Benedicta of the Cross and others.

“The Lord made us with particular gifts as women,” said DeLucenay. “It’s our Christian vocation to live out hospitality, in service to others, to be understanding. I lived in a co-ed community before, and we’re completely different. Men and women balance each other out.”

As for the community fostering radical love, she notes that the love among the FIAT residents “is radical, because it’s intentional. We’re involved in each other’s lives, we’re not living just for ourselves. We are each our sisters’ keeper.”

‘Something I was longing for’

Before more “sisters” could be added to the community, Delucenay and Langley needed to find a large enough home for rent. They prayed a St. Joseph novena in May of 2018. By the end of the month they found a five-bedroom home for rent in the Broad Ripple area of Indianapolis — with a Catholic landlord.

With a home settled upon, they began an application process seeking other young Catholic women to join them in their vision and mission.

“It was something I was longing for, women to live intentionally with and to grow closer to God with,” said 25-year-old Anna Schmalzried of St. John the Evangelist Parish in Indianapolis.

“My fiancé Dan encouraged me to apply,” she added, noting their upcoming nuptials in September.

When Langley heard that Julia Payne, a member of her Emmaus discipleship group, was looking for a new roommate, she suggested the 26-year-old apply to join the intentional community. Payne became the fourth founding member of the FIAT Women’s Formation House.

The women signed a oneyear lease and moved into their new community of “intentional formation” on July 1, 2018.

Each of the women says the experience thus far has fulfilled the community’s stated vision.

“I grew up in a large family,” said Schmalzreid, who works in interior design. “I was surrounded by love and moral values.”

She says when she left home, she “took steps backward by not living in community. I needed people who cared about my soul.”

Now, she said, “Every day I grow in prayer [said] together. I learn from them. I’m learning to be a better Catholic.”

Langley agreed, noting that “the Lord has provided me with what I needed through [the other women], things I didn’t even know I needed.”

The community has helped Payne find a “work/life balance,” she says. Her job as state deputy attorney general “requires a lot of hours. It’s nice to come home and talk to people who aren’t lawyers!” 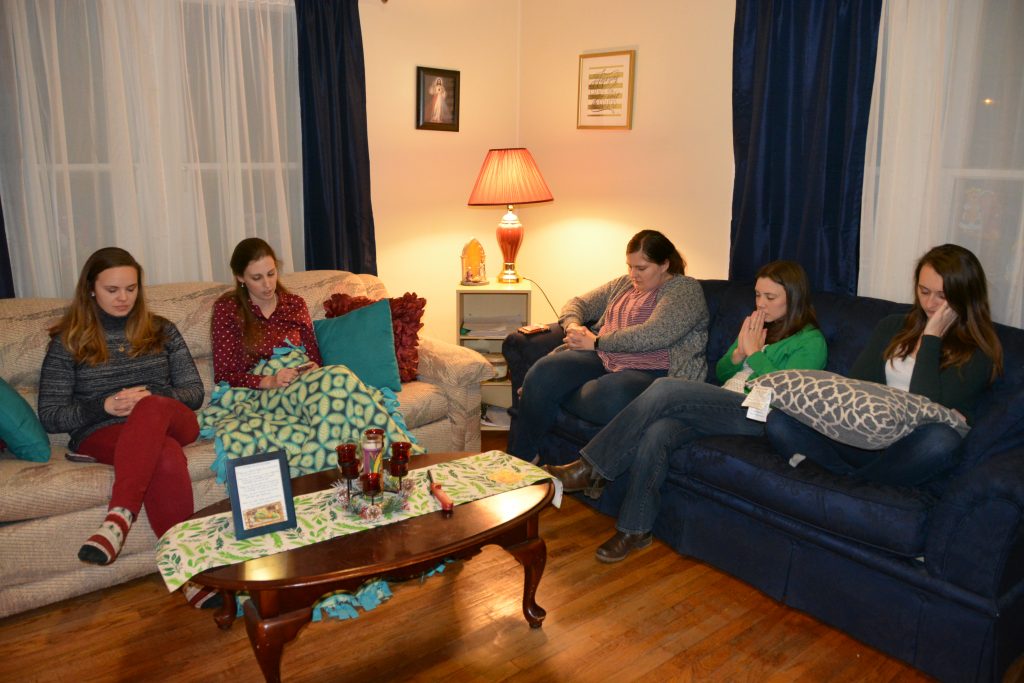 Finding such balance has been a benefit for DeLucenay as well.

“As a youth minister, creating boundaries is something you have to work on because you’re so involved,” she admitted. The community provides her with an outlet for fun and socializing.

“Sometimes we play games, we do crafts, we cook and bake for each other,” she said.

And through hospitality offered by the home to the larger young adult Catholic community, such as Wine Wednesday or liturgical season-themed parties, Delucenay gets to “meet others and build fellowship that way.”

In addition to growing in holiness, the women note that personal growth is also inherent when living in community.

“You have to have courage to ask others for what you need in a tactful manner,” said Langley. “That can be hard, especially if you don’t like conflict. Or maybe you’re not afraid of conflict and you need to ask for things in a calm manner.”

Cannon, who now serves as spiritual mentor to the women and as the liaison between them and the archdiocese, says the women’s growth has been “exponential.”

“I’m overwhelmed by how I see their lives changing, and the hope they have for the future as individuals and as a house,” she said. “The largest change is their ability to have hope in themselves, in each other and in Christ.

“And it’s been fantastic to see Perry’s and Corinne’s vision of a formation house come to life. From the beginning, they let the Holy Spirit lead the project. And the Holy Spirit led all four of these women to be here.”

‘Each other’s best interest at heart’

Delucenay said it was also through the Holy Spirit that the name FIAT was chosen for the formation house. The name refers to the Blessed Mother’s agreement to God’s plan as revealed to her by the Archangel Gabriel.

“Who is the best example of the vocation of women?” asked DeLucenay. “How can we live out our ‘yes’ to God? That’s our vocation as women — how are we living out what God is calling us to be as individuals and as women.”

The hope is that enough young Catholic women ages 18-35 will desire to live in intentional community that an additional home will be necessary in the future.

“They can be anywhere in their Catholic faith, on any part of that journey,” said Langley of eligible women.

Schmalzreid adds that interested women can also be of “all personality types. That’s what helps make it work. Introverts, extroverts — we’re all here.”

Cannon noted, too, that women are welcome regardless of the particular vocation they feel called to.

“A big piece of living in formation is to get to know who we are, our strengths, our weaknesses,” she explained. “And community is key in that, because we have each other’s best interest at heart.”

For more information on FIAT Women’s Formation House or living in intentional formational community, send an e-mail to [email protected]