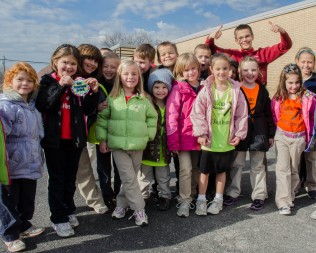 FORT WAYNE — In his continued journey to visit each and every school in the Diocese of Fort Wayne-South Bend, Bishop Kevin C. Rhoades celebrated Mass with the students of St. Joseph-Hessen Cassel on Friday, Nov. 30, before touring the classrooms and joining them for lunch.

On the feast day of St. Andrew, the bishop’s homily outlined the similarities of the first Apostles to his current role as a successor. Bishop Rhoades singled out one young man with the first name of Andrew and detailed how his patron was crucified on a cross, but because he did not feel he was worthy to be killed the same way as Jesus, St. Andrew died on an X-shaped cross. Bishop Rhoades quizzed students on the names of the first Twelve, then carefully explained, “Like the Apostles, we are all called to tell people about Jesus.”

Finally, the bishop posed a challenging question to the student body, “Do people see you as a follower of Christ?” A fitting recessional hymn was chosen by the student-led choir titled, “Go Make a Difference.”

For their special day with Bishop Rhoades, students and staff donned spirit-wear labeled “Follow the Leader” created by the Home and School Association — a parent group brought back just this year. After a picture with all 130 students in the gymnasium, Bishop Rhoades spent time with each grade from pre-K to eighth in their classrooms, as is his routine.

He asked what each group was studying in religion and found that the sacraments, the history of Moses and the Old Testament and the season of Advent are among some of the topics being covered. He learned things like — each grade has adopted a classroom saint in honor of the Year of Faith, the junior high grades are departmentalized and St. Joseph School offers both accelerated reading and math programs.

Bishop Rhoades encouraged the eighth-graders to stay close to the Holy Spirit as they prepare for Confirmation. He role-played how a bishop ordains a new priest with fifth grader, Derek Schaadt, and said the Act of Contrition with the nine second-grade boys preparing to make their first Reconciliation.

Bishop Rhoades was quite impressed with the new addition of Smart Boards for each of the 10 rooms and the state-of-the-art computer lab on campus. He shared different stories in the different rooms but created a special bond with the seventh grade in particular, because that was the year he first felt he was being called to the priesthood, and because they had chosen St. Nicholas as their classroom saint.

His story about how he developed a devotion to St. Nicholas after a close call in southern Italy while he was traveling by train across Europe captivated his audience. Bishop Rhoades deviated from his travel plans to visit the tomb of St. Nicholas or else he could have been one of the 85 killed later in the day when the train was bombed by terrorists.

After signing an autograph requested by Calvin Dornseif, Bishop Rhoades joined students in the cafeteria for a baked potato bar before heading back to his afternoon meetings.

Backgrounds and experience vary, but it is evident each has a common devotion to their beloved school and share the rich tradition of their Catholic faith with their students in a parish deep in history, tradition and family.

First-grade teacher Carol Sarasien has over 30 years in Catholic education and doubles in the music department. Each spring she provides an opportunity for students to be part of an elaborate musical production and her Christmas program is a beautiful tradition with its Nativity scene in the large wooden stable and angelic songs. The school brought back a band program this fall and the drummers made their debut at the morning Mass.

In his fifth year with the junior high students, Brett Rupright, who attended St. Joseph School himself, said it is a joy to teach in a Catholic school, especially Hessen Cassel, “Students want to be here and we have the strong support of our parents to help them succeed.” Rupright has also played a dual role at the school as a basketball coach.

The school is blessed with involved parents like Roselyn Knapke, the mother of six who attend or attended St. Joseph. Knapke has nephews on both sides of the family who attend the school, and both she and her husband are graduates. On the day of the visit, she was serving as a substitute teacher for the fifth graders and can also be found in various other day-to-day roles or on the bench coaching.

In 1868 the Poor Handmaids of Jesus Christ set up a convent and a school. The Franciscan Sisters of the Sacred Heart went on to serve the school for over a century, from 1877 to 1988.

A new two-story brick building for 100 students was completed in 1879 with the newer, larger setting constructed in 1961. Three classrooms were added in 1992 and a soccer field and baseball diamond was added in 1994. In 2004, bleacher seats were restored and a new scoreboard and floor were installed in the Activity Center.