WASHINGTON (CNS) — Like many across the country, Father William Gurnee and Father Gary Studniewski watched in horror as a rioting mob stormed and ransacked the U.S. Capitol on Jan. 6, attempting to disrupt Congress at it certified the Electoral College vote of President-elect Joe Biden. 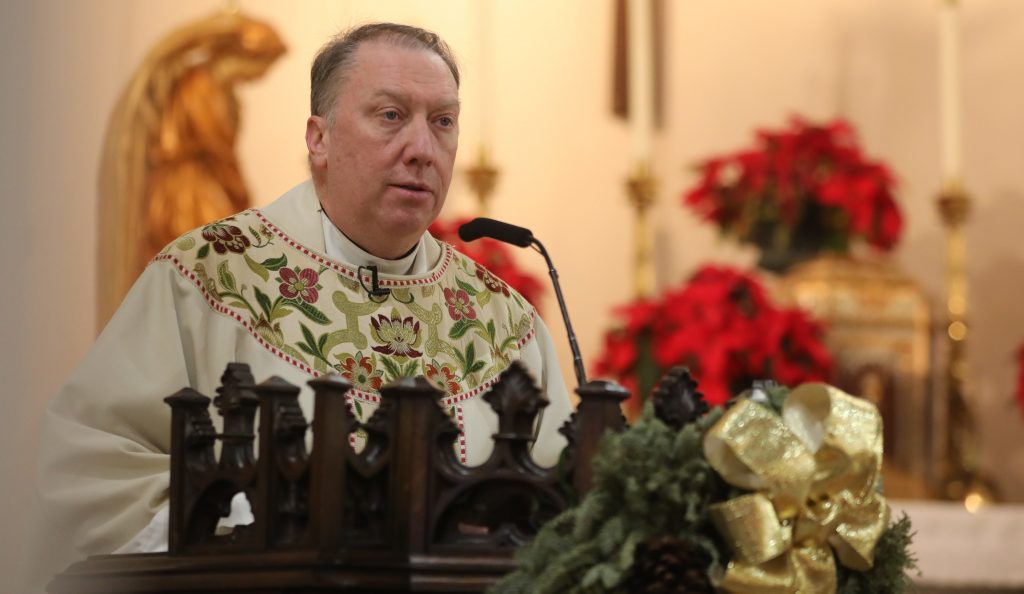 For Father Gurnee, witnessing TV coverage of what was happening at the Capitol was especially painful, because before entering the seminary, he worked on Capitol Hill as a legislative assistant to the late Rep. Robert Smith, R-Oregon, and attended Mass at St. Joseph’s Church. After being ordained to the priesthood in 2000, he celebrated his first Mass at St. Joseph’s and since 2017 he has been its pastor.

“I never thought I’d have the privilege to be pastor here,” said the priest. “I revere this Hill.”

In a Jan. 10 interview just before Mass, he said that during the attack, he was receiving texts from parishioners who worked there and were being sheltered in safety as the mob rampaged through the building.

“When I saw people walking brazenly on the floor of the Senate, I was sickened,” he said, adding that rioters posing for photos in Statuary Hall and with their feet up on a staffer’s desk in House Speaker Nancy Pelosi’s office “was so insulting to our country.”

On Jan. 7, he told the Catholic Standard, archdiocesan newspaper of Washington, that he was still processing what he had seen and what he should say about it in his upcoming Sunday homily, adding that parishioners had encouraged him to offer a theological, not a political message, which he said he planned to try to do.

And four days after the Capitol breach, his homily emphasized the need to stay focused on what really matters — eternal salvation.

The priest said when people take an earthly view over a spiritual outlook, “the results are always ruinous,” and he quoted the words of Russian dissident Aleksandr Solzhenitsyn, who in reflecting on the aftermath of the Russian Revolution which led to the deaths of millions over the following decades, said, “Men have forgotten God; that’s why all this has happened.”

“This week, I think we saw the tragic consequences of what happens when individuals and a nation loses its spiritual outlook,” he told the congregation.

The priest said he believed that leaders inside and outside the government “cynically manipulated people for their own selfish reasons,” and as a result, many people came to Washington “thought they were engaging in an historic event to secure freedom and fairness for this country.”

He said some carried signs proclaiming their Christian faith, and some in the crowd probably were “veterans of the Right to Life March who had in years past peacefully proclaimed the need to protect the unborn.” For many years, both St. Joseph’s and St. Peter’s parishes have offered hospitality to marchers from across the country participating in the annual March for Life.

Father Gurnee said participants at the Jan. 6 rally “were told that they should fight, that they should enter into combat and prevent the theft of something given to them by God.” President Trump and other speakers had addressed the rally, charging that the presidential election was stolen. The participants, he said, were “incited into a mob, and they were fueled with a rage that told them they were being denied their rights. Instead, they stole the rights of others. Five people died and countless others were trampled or injured.”

“Democracy was assaulted from within, and our elected leaders were temporarily prevented from discharging their duty. Thankfully, the People’s House was restored, and their work finished,” he added.

He thanked those serving honorably in government and those who protect our freedoms and also offered condolences “for those who grieve deaths that did not need to happen.”

Father Gurnee encouraged people to recommit themselves to a spiritual outlook on life, “one which calls us to love our enemies, to forgive those who harm us and to work respectfully and firmly to proclaim the truth, in season and out.”

After Mass, a Senate aide who was in lockdown for several hours during the siege of the U.S. Capitol said he and his family attend Mass at St. Joseph’s, their home parish and he appreciated the pastor’s homily.

Asked about his hopes for the future, he said: “I hope there’s progress toward unity, but I think we’ve learned it has to be unity based on truth.”

St. Joseph’s Church is located a few blocks from the U.S. Capitol, near Senate office buildings now surrounded by fencing with National Guard members standing sentry there and along the fencing surrounding the Capitol.

On Jan. 7, one day after the Capitol breach, Father Studniewski, pastor of St. Peter’s Parish on the other side of Capitol Hill, noted that the previous day he had celebrated morning Mass as usual. Knowing that Congress was scheduled to ratify the Electoral College vote that day, the priest said: “We were able to pray for them, to pray for wisdom, to pray for courage, strength and understanding.”

He noted that St. Peter’s Church is located near House of Representatives’ office buildings, and that day, like typical weekday mornings, several House members from both parties attended the Mass.

“That’s how they begin their day,” he said, adding that throughout the day, he had seen a constant stream of protesters walking past the church.

“They were very peaceful. This is what Americans do. They go to demonstrate, to have their voices heard,” the priest said.

Father Studniewski added, “It was a normal day, until all that sickening unrest in the afternoon.”

The priest had gone out that afternoon to get groceries, and returned to find roads closed around the neighborhood, a sign that something had gone wrong. Then a nearby apartment complex had to be evacuated after a suspicious package was found in a building on that block.

“We had a lot of residents come into (St. Peter’s) church as a safe haven,” he said, adding that they kept the church open and brought water to their neighbors who had come there. “I was pleased the church was open and could be a sanctuary to them.”

As he watched television and saw the mayhem unfolding at the U.S. Capitol, Father Studniewski said it was “very disturbing, very disheartening.”

Before entering the seminary, Father Studniewski was a captain in the U.S. Army. After his ordination in 1995, he served as an Army chaplain for many years and achieved the rank of colonel.

The priest, assigned to St. Peter’s in 2017, said he hoped the Jan. 6 events lead to “a turning point where people, Red (states), Blue (states), with faith or no faith, people of all stripes and backgrounds, could say, ‘Let’s make sure this doesn’t happen again. The spirit we saw yesterday can never take us forward.’”

He also said he hoped the nation’s people and its leaders could be guided by a spirit like that which Jesus witnessed to, a spirit of “truth, justice, harmony, charity and peace,” to pursue change nonviolently like Rev. Dr. Martin Luther King Jr. did.

“Any change that’s going to be lasting and meaningful is going to be grounded in that spirit of God,” he said.

Zimmermann is editor of the Catholic Standard, archdiocesan newspaper of Washington.