Article updated May 10 to correct an editing error. 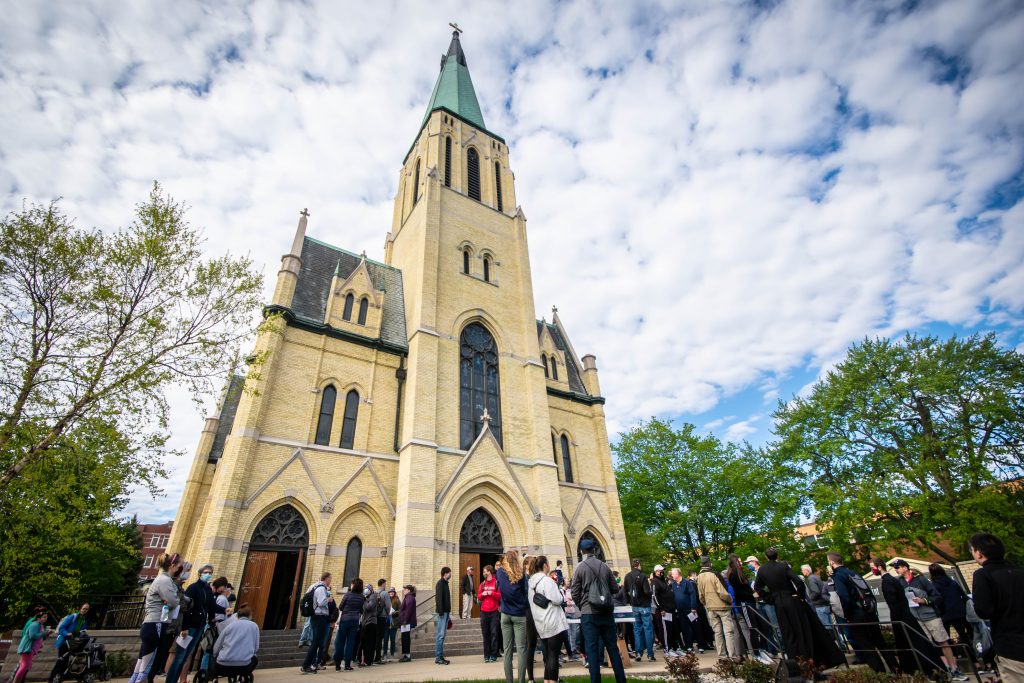 Photos by Molly Gettinger
Pilgrims gather outside St. Joseph Parish, Mishawaka, for the start of the inaugural Way of St. Joseph pilgrimage. Participants were greeted with refreshments, rosaries, pilgrimage wristbands and booklets, which were stamped at each of the locations where pilgrims paused for prayer.

On a sunny spring day with the temperature gradually rising, joyful gratitude was a common reaction. Several pilgrims were completing novenas or formally consecrating themselves to St. Joseph on the day, and some were to receive their first holy Communion the following day.

Father Matt Fase, CSC, parochial vicar at St. Joseph, South Bend, said he enjoyed forging a new connection with the church in Mishawaka, something more positive than occasionally redirecting callers who reach the parish by mistake, intending to contact the other.

Father Christopher Lapp, pastor of St. Joseph, Mishawaka, celebrated Mass at 7 a.m. The liturgy was followed by a time of adoration. The parish provided doughnuts, and there were colorful rosaries made and donated by Richard and Joan Fortunak of St. Stanislaus Kostka Parish, New Carlisle, and blessed by Deacon Frederick Everett. Volunteers handed out booklets with spaces for “passport” stamps at each of the stopping points along the route — churches, Veterans Memorial Park and Howard Park. 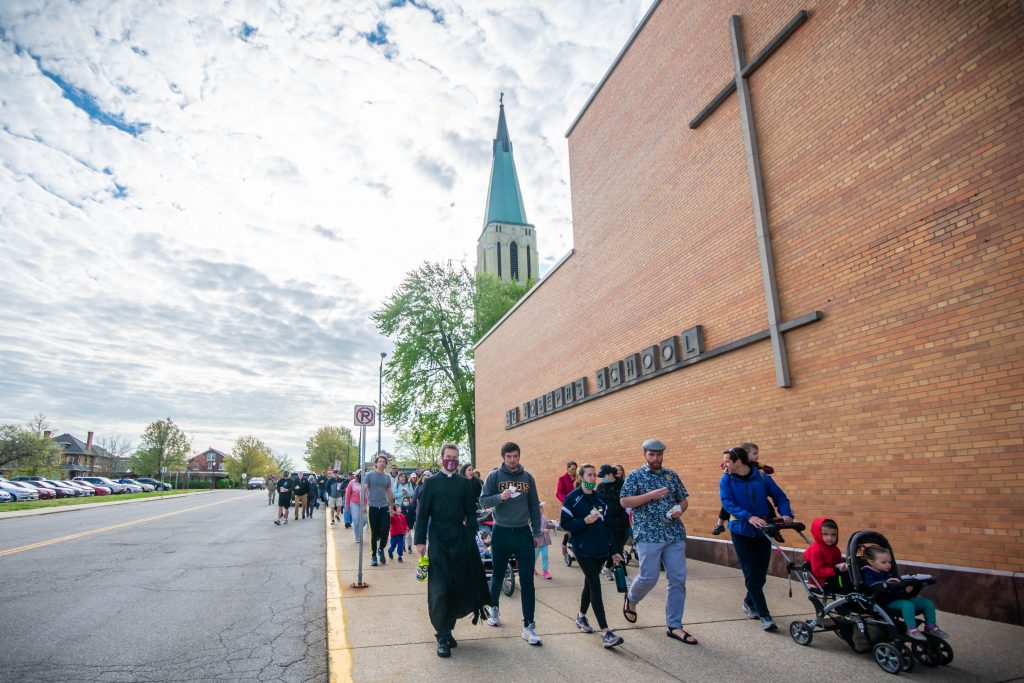 After an opening prayer service led by Father Christopher Lapp, the pilgrims depart on their 5-mile trek along the St. Joseph River to St. Joseph Parish, South Bend.

At 9 a.m. Father Lapp read the Gospel from Luke 24, about Jesus joining two disciples on their dispirited journey away from the community. In a similar way, He is just as eager to join us, who are all among His dearest friends, wherever we’re headed, the pastor said. He urged everyone to treasure the moments of silence along the way, because they lead to reflection on the fundamental direction of one’s life. The prayer service concluded with eucharistic benediction, and then the walkers set out.

Jim and Diana Klee, their daughter Lily and their labradoodles Poppy and Annie may have traveled the farthest. Parishioners at St. Peter Parish in Fort Wayne, they live in Angola and read about the pilgrimage in Today’s Catholic. Because Jim is currently unemployed, they had an intention to lay at the feet of Joseph the Worker. 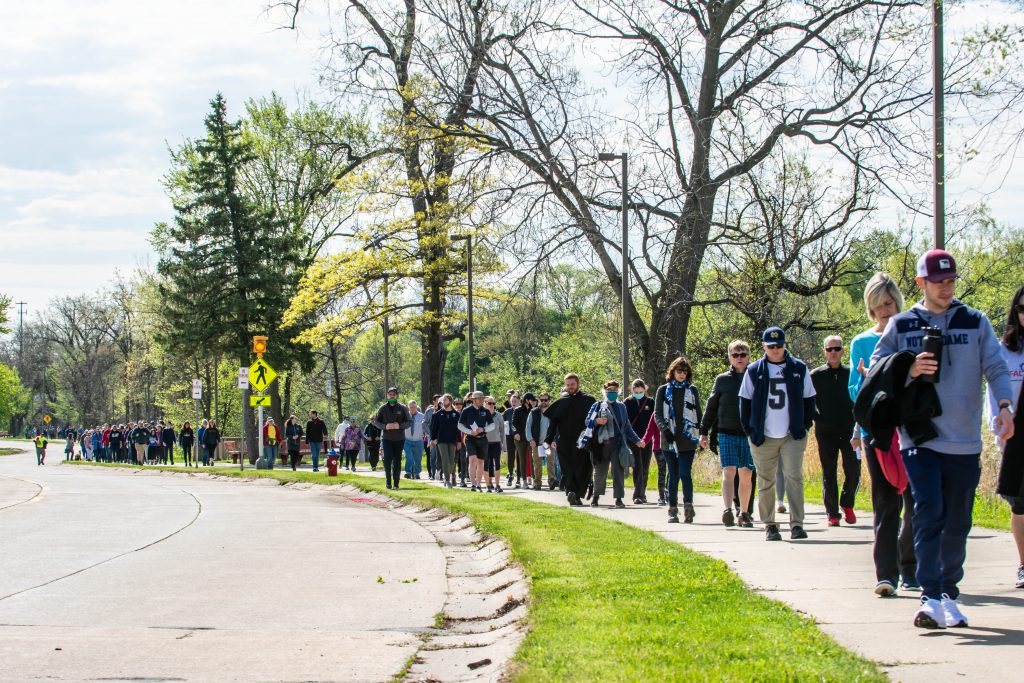 Several of the pilgrims had or were planning to also walk the famed Camino de Santiago de Compostela pilgrimage in Spain. St. Pius X, Granger, parishioner Joan Sniadecki and her husband, Paul, had walked a small portion before the pandemic struck.

Father Fase led the bilingual closing prayer service inside St. Joseph Church, South Bend. It included a singing of Psalm 122, a pilgrim’s prayer approaching Jerusalem. The Andrew Polaniecki family led the prayer of the faithful, and then each pilgrim was invited to bring a written or drawn record of his intention to a basket in front of the statue of St. Joseph. Father Fase urged everyone to continue the forward impetus of their journey with the Lord and His saints, especially St. Joseph. As Sean Allen from the diocesan Young Adult Ministry put it, “I hope each pilgrim heard something from the Lord that he or she can bring back and integrate into the pilgrimage of daily life, walking more closely with the Lord afterward.”

In the parish parking lot, members of the Knights of Columbus served pulled pork, hot dogs and pierogies. Children played on the grassy playground while adults visited, with a backdrop of live music.

The idea for the pilgrimage came from Holy Cross seminarian David Murphy, who thought it might take place as a follow-up to a young adult walk last fall between Christ the King and St. Joseph parishes in South Bend. He shared the idea with Will Peterson, founder of the pilgrimage company Modern Catholic Pilgrim. Two days after Peterson had contacted Allen, Pope Francis announced the Year of St. Joseph. Allen joked to Peterson, “Who’s your inside man at the Vatican?”

Many individuals and organizations came together to make the ambitious event possible. Besides the individual parishes, Marian High School, Knights of Columbus councils 553 and 1878, Modern Catholic Pilgrim, the diocesan Young Adult Ministry, Marriage and Family Life Ministry and the Communications team were all involved in the planning and publicizing.