It wasn’t all that long ago — a little over 50 years — that the Second Vatican Council met to address the relationship between the Catholic Church and the modern world. Significant changes were integrated into the Church’s liturgy and worship as a result of the three years of doctrinal discussions, including one that’s being taken up again, in a new light: the practice of veiling.

The chapel veil, also commonly called a mantilla, was a required accessory prior to the Vatican II reforms. Its use was among the dictates of Canon Law that established appropriate ways to present oneself in church or during liturgical events. Chapel veils were to be worn anytime a woman was in the presence of the Blessed Sacrament, “as a sign of reverence and piety while in the presence of God,” according to The Catholic Company.

Traditionally, it states at www.catholiccompany.com, veils were to be worn to obscure the inherent physical beauty of a woman, so that the beauty of God might be glorified instead. Black veils were worn by married or widowed women, while white veils were worn by young girls or unmarried women. Their use was also to be a way of emulating Mary, the archetype of purity and humility, and signified the role of women as a life-bearing vessel that should be veiled in a way that was representative of the respect with which other sacred, life-bearing vessels are veiled, such as the chalice that holds the Blood of Christ. The reposed Eucharist is also veiled by the Tabernacle. 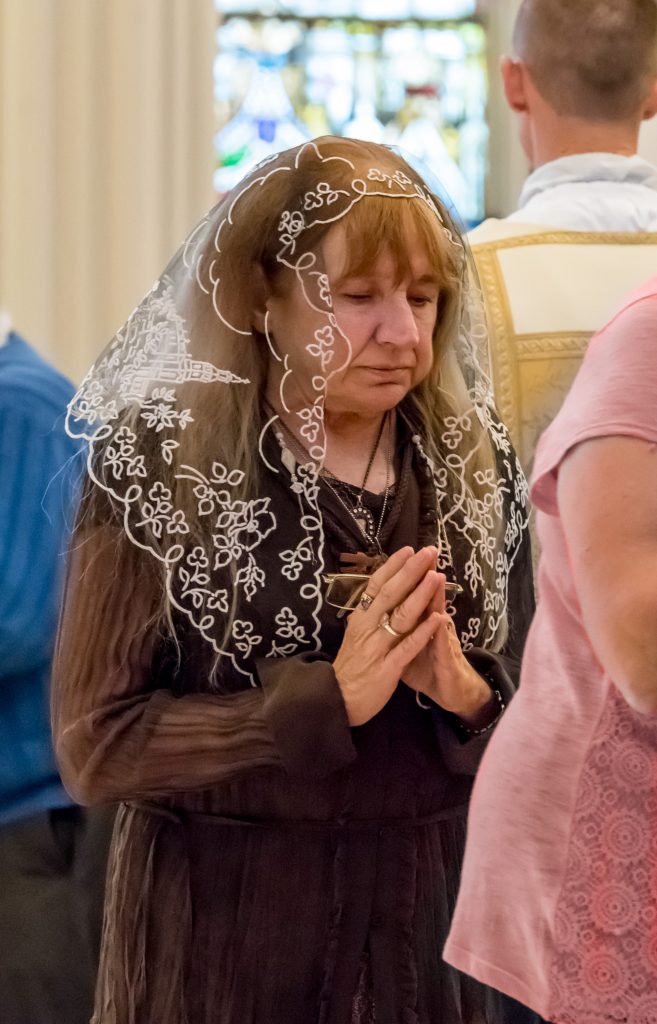 Above, Jan Scher veils during a Mass honoring the 100th anniversary of the Our Lady of Fatima apparitions. Among the key differences between veiling prior and post-Vatican II is that use of the chapel veil is now entirely optional. Some modern women say they feel called to express reverence and devotion through its use, but it remains a deeply personal and individual decision. Joe Romie

The document “Inter Insignoires,” issued by the Congregation for the Doctrine of the Faith in the 1970s, stated that chapel veils were no longer mandatory, since wearing them was not a matter of faith. Over the next decade and a half, they fell into widespread disuse.

The chapel veil is currently experiencing a resurgence, however, particularly among younger Catholic women. Those who veil say they do so largely because they feel welcome to fully explore and embrace their faith, and to practice the devotions and adopt whichever of the accepted expressions of spirituality have meaning for them.

In part because veiling was formerly an obligation of women in the Church, views on its current use are somewhat mixed. Veiling is still associated, by those who recall the period, with the concurrent, pre-Vatican II culture that took little interest in inviting women to participate in the life and leadership of the Church. Eventually, the veil became a symbol of that exclusion. In a more dramatic way, the practice of veiling also harkens to the forced covering of women observable in modern-day repressive cultures, noncompliance with which is met with repercussions that can be as extreme as death.

Other reasons for not veiling are just as strong, Catholic author Terry McDermott points out on Catholic Insight: For instance, the use of a chapel veil is easily employed to project false humility or a holier-than-thou attitude.

“Women have grown into their own spirituality and are embracing the veil as one of the ways they can choose to express their faith,” said Mary Glowaski, who is Special Assistant to Bishop Kevin C. Rhoades. “Some women may be moved to express their faith by covering themselves with the veil, while others embrace different practices and devotions. How beautiful that the Church can now hold all of these expressions.”

It’s a freedom Pope Francis has encouraged the entire Church to explore. Repeatedly, the pontiff has referenced his respect for the “feminine genius,” and women’s welcoming and insightful nature, as well as their “intelligence of faith,” and encouraged discussion about how their gifts can be best utilized throughout the structure of the Church.

“Whether or not to wear a veil is a personal choice. Before choosing, we ought to spend time in prayer and discernment so that we honestly examine our hearts for the reasons we want to veil,” said McDermott. “Likewise, once we start veiling, regularly re-examining our reasons will keep us humble, honest and at peace with our decision.”