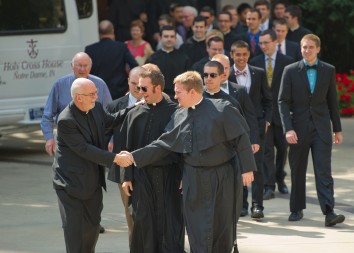 NOTRE DAME — With more than 50 men in formation, the vocations program of the Congregation of Holy Cross, United States Province of Priests and Brothers, is among the healthiest for Catholic religious orders in the United States.

Personal attention and an engaging, interactive online social media presence have led to one of the largest seminary classes in recent years. The class comes from 15 different states, Canada, England and Ireland and from all walks of life, with diverse educational backgrounds, hobbies and interests. They all share common goals: to serve God with zeal and to become “Men With Hope to Bring” as they begin to live out the charism of Holy Cross during their formation.

The U.S. Province’s Office of Vocations uses social media to spread the word about upcoming events and to increase general awareness on the Internet. Young men considering a vocation to the priesthood and religious life are able to learn more through Facebook, Twitter, YouTube, Flickr and blogs.

“It has become one more place where we can connect with those who are interested in considering a vocation to the religious life or priesthood,” said Vocations Director Holy Cross Father James T. Gallagher. “We use social media as a way to make ourselves known to those young men discerning a call to religious life. But the personal interaction still comes first. Our social media outlets are just tools we use to help make Holy Cross known, share discernment tips and help deepen a man’s prayer life.”

All men considering a life in Holy Cross get the personal attention of the vocations team. Throughout the year, they work with more than 100 young men who are discerning a call to the priesthood or religious life by way of vocation retreats, discernment groups on campus at Notre Dame and visits to the seminary.

Deacon Ching said he first felt God might be calling him to religious life while he was attending high school, which was run by Holy Cross brothers. “There was just something different about their approach to teaching and to the students and you could tell that the difference had something to do with their life of praying and living in community,” said Ching, who is serving at St. Joseph Parish in South Bend.

Deacon DeMott previously served at Saint Joseph’s High School; as director of Christian formation at St. Joseph Parish; and director of liturgy and music at Holy Cross and St. Stanislaus in South Bend. He first started to consider religious life after a Confirmation retreat at Notre Dame when he was 16.

“Discernment took time,” Deacon DeMott said. “I had studied for a career in medicine and had imagined that I would get married. Slowly, however, God’s invitation to religious life and priesthood became clear to me. I began to work with the poor and those battling addiction. I studied theology. I sought out opportunities for ministry. Finally, as I finished my time as rector of Keough Hall at Notre Dame, I had a deep sense of peace about my future. Religious life and priesthood in Holy Cross had totally captivated my imagination.”

Deacon Waugh serves at Christ the King Parish in South Bend. He began discerning his call to the priesthood after meeting Holy Cross Religious at Notre Dame in 2004. “I think discerning your vocation is less about reaching a point of certainty than it is about falling in love,” he said. “For me, it was the gradual realization that my best gifts — those I always knew about and those I have discovered or had shown to me along the way — as well as my greatest weaknesses are most likely to be handled in productive ways as a brother in a community of prayer, good humor and fraternal concern.”

The U.S. Province is comprised of about 500 men, including priests, brothers and those in formation around the world. There are about 1,200 Congregation of Holy Cross Religious worldwide in 16 countries on five continents.