When Stephen Felicichia was in third grade at St. Therese School, Fort Wayne, he first heard the calling to become a priest. 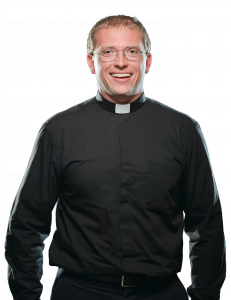 “It was like someone tapped me in my brain. I just knew I was supposed to be a priest. I didn’t do anything about it, because I was in third grade playing with my Ninja Turtles,” said Felicichia.

“It literally never went away though,” he continued, “so I gave God some time.”

Born in Fort Wayne, Felicichia is the son of Bob and Joan Felicichia. He has two older sisters, Barbara and Sarah.

By the time he reached eighth grade, Felicichia said he was “service-oriented,” probably because both parents had worked as police officers. He thought that maybe he, too, would be a police officer or serve in the Army. “Later in life, I’ll go to the priesthood,” he mused.

Felicichia was a sophomore at Bishop Luers High School, Fort Wayne, when the 9/11 attacks occurred.

“My dad had raised me to love our country, so I took those attacks personally,” he said. “I asked him what he thought of my joining the Army right out of high school.” “That would be fine,” Bob said, “but you probably would make a better officer than an enlisted man.”

“I thought about that, and then it was my junior year. I had reasonably good grades and was a decent athlete at the time,” Felicichia related. “I knew about West Point and the ROTC program, and thought ‘I bet I could do this.’ But even as I applied, the call to the priesthood never went away. It just resonated,” he said. “It was like God saying, ‘This is what you should do at some point.’ I didn’t hear or see anything, but it was as clear as day that my calling was to be a priest. I put it off!”

As he was filling out the paperwork for West Point, Felicichia asked his mom if he should just quit the forms and apply to the priesthood. Or should he pursue West Point and think about becoming a priest later? Joan said, “It’s easier to go from being a soldier to a priest than it is going from a priest to a soldier.”

“After that, although she never told me at the time, Mom started praying to St. Maximilian Kolbe, asking him to watch over me. The saint wanted to be a soldier, but his mother talked him into being a priest,” said Felicichia.

The Polish Conventual Franciscan friar volunteered to die in place of a stranger in the German death camp of Auschwitz. He was canonized in 1982 by St. Pope John Paul II.

“I already had a devotion to the saint since St. Therese has a sister parish in Honduras named after him. And my Eagle project was to arrange to have medical supplies sent there,” he said.  In addition, he has a piece of the saint’s robe — a second-class relic — given him by a friend who became a religious brother.

After graduating from Bishop Luers in 2004, Felicichia was accepted at the U.S. Military Academy at West Point. He graduated in 2008 as a second lieutenant, U.S. Army Field Artillery, and was stationed at Fort Richardson in Anchorage, Alaska. He served two tours in Afghanistan and completed his five years of service, attaining the rank of captain.

Six months into his first deployment in Afghanistan near the Pakistan border, his unit experienced its first casualty when a mortar round tore through the roof and killed a fellow soldier. Felicichia awoke, sat up in his cot and began thinking about his own mortality, realizing that at any moment he could be killed. In was in that frightening moment he knew he really did want to be a priest. “So, I said a very honest prayer, sort of a negotiation prayer, saying if you get me out of this in one piece with all of my fingers and toes, I will look into the priesthood as soon as my remaining four-and-a-half year commitment is up. But I can do You no good maimed or dead,” he concluded. “I thought I had a good position.”

Suddenly, nearly everyone in his unit, including officers, were moved around or transferred. Felicichia found himself back at Fort Richardson in February, where it was cold, dark and all his friends were somewhere else. He realized he had just come out of a war zone and was a mess.

“I needed Jesus,” he stressed. He took someone’s advice and started going to confession once a month and attending daily Mass.

The chaplain put Felicichia in touch with Msgr. Bernard Galic, vocation director for the Diocese of Fort Wayne-South Bend at that time.

Felicichia would be released too late for the 2013 seminary class. “But later, after we met, it was like the wheels were greased,” he said. “Everything went smoothly, like it was supposed to be. The psychological evaluations, letters of recommendation and so forth, were much like applying to West Point. In fact,” he advised, “if you want to get into a seminary you really couldn’t do better than applying to a military academy first. My mother’s words were so prophetic,” he recollected.

Accepted into the 2014 class, Felicichia attended Mount St. Mary’s Seminary in Emmitsburg, Maryland, for five years. After serving as a deacon for a year, he will be ordained a priest by Bishop Kevin C. Rhoades.

After his ordination to the Sacred Order of the Diaconate in the Cathedral of the Immaculate Conception, Fort Wayne, he’s looking forward to giving his first homily at the 5 p.m. Mass at St. Therese Saturday, May 18. When he’s assigned to a parish for the summer, Felicichia will fulfill his role of service — baptizing, preaching, witnessing marriages, praying with families for their deceased relatives and whatever else the pastor needs him to do.

As a priest, he said what he will enjoy most is celebrating Mass. “Being able to hold God in my hands is a thought that blows my mind. One second it’s a piece of bread and the next it’s Someone; it’s The Someone,” he emphasized. “My biggest challenge probably will be finding time to pray. It’s easy to fool yourself, thinking, ‘I’ve got to do all this important priestly work,’ but you can’t do the work without prayer. If you lose your prayer life, you lose your ability to minister to people.”

Now there’s no voice speaking to him; there’s fulfillment. “I feel I am doing what I am supposed to do. Everything that came before this calling had its place. God has made it work perfectly,” he concluded.