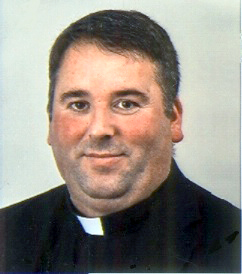 Father Dermot Gahan began his ministry to the Diocese of Fort Wayne-South Bend even before his ordination to the priesthood: He was first invited to the diocese by former Bishop John M. D’Arcy for summer assignments as a seminarian. Today, he is the parochial vicar at St. Matthew Cathedral Parish in South Bend and assists also at Sacred Heart Parish in Warsaw and St. Thomas the Apostle Parish in Elkhart.

Born in Wexford County, Ireland, in a small farming community called Clologue, Father Gahan was the third oldest in a large family of seven brothers and three sisters. After six years of boarding school at St. Peter’s College in Wexford, he made the decision to “cross the arch” into the seminary located on the same grounds.

A large part of his discernment of the priesthood was St. Peter’s College itself, he said. “Going to the diocesan high school was inspirational. You had the seminary there, you saw the students, you had the priests who were teaching as well,” Father Gahan recalled. He was ordained in 1995.

After his ordination, Father Gahan came back to Indiana to visit St. Matthew parish. He was told by parishioners and priests that he would be assigned to the parish, which he denied, having heard nothing of such an assignment. On the plane home, however, he received a message stating that his bishop would meet him at the airport. At the baggage claim in Dublin, Father Gahan learned he would be sent back to South Bend to serve as associate pastor at St. Matthew.

He spent four years in the parish before returning to work in two different parishes in Ireland for around 15 years.

Because he has many friends in the area and feels at home here, he said, he spent many of his holidays while here filling in for priests within the diocese. He longed to return to South Bend on a long-term basis. A request made of Bishop Kevin C. Rhoades did bring Father Gahan back to South Bend and surprisingly, back to St. Matthew last August. He expects to remain in the diocese for at least two more years.

Aside from working at St. Matthew, Father Gahan also substitutes in other parishes when the need arises.

“I like what I’m doing at the moment. If someone gets sick, I go fill in; it’s nice to see the different parishes,” he related. “We do everything, supposedly; we’re all one holy Catholic Church, but things are done a bit different everywhere you go. It’s interesting to see that.”

Aside from the extremes in northern Indiana weather, some differences Father Gahan noticed in the diocese lie in things like parish administration and the people in general.

Since Catholicism is the dominant religion in southern Ireland, the Rite of Christian Initiation process was relatively unknown to him initially. He also stated that in his experience, he sees far more young people come to Mass at St. Matthew than he did in Ireland.

The numbers of those in attendance weekly are encouraging to him. “Generally speaking, people are here because they want to be here.”

Looking back on 25 years, Father Gahan recalled the many people who inspired his vocation. He was raised in a strong Catholic family, with his grandparents leading the rosary every evening. He also had an uncle who was a priest and an aunt who was a nun. Neighbors, friends and especially the priests who taught him in high school proved an incredible source of inspiration for him as well.

He says his greatest teachers were priests like Father Thomas Shoemaker and former Auxiliary Bishop John Sheets, SJ, who taught him how to be a good priest by their example.

Though he admits to being a poor student academically, he gained much wisdom and insight into the priesthood by learning from those he worked with. He stated, “A lot of people think you go to seminary to become a priest — you don’t. You go to seminary to learn knowledge … The knowledge is a tool that you use, but you learn to be a priest in your parish — watching what’s going on and watching the fellas that have been there before you. A vocation is the work of a parish, a community.”

While the future of a priest is always dependent upon the wishes of his bishop, Father Gahan looks forward to serving wherever and in whatever capacity he is called. Wherever he goes, he makes it home and seeks happiness in his vocation.

“I love what I do, you know. You get up every morning … because you love what you’re doing.”