Two years ago Bishop Luers High School Principal Jim Huth, who was assistant principal at the time, attended a SportsLeader conference in Cincinnati, Ohio, to learn about the Catholic, virtue-based formation program for coaches. He became eager to bring it the Fort Wayne school, and at the beginning of the 2017-18 school year it was implemented.

Athletic programs at Bishop Luers have long incorporated the Catholic faith, but SportsLeader offers an intentional way for student-athletes to grow their Catholic faith and shape their character, as well as witness to the community that watches the competitions.

In July, the Bishop Luers athletic coaches gathered to learn about program initiatives carried out through the curriculum, prayers and videos specifically designed to form leaders and teach virtue. Lou Judd, director of SportsLeader, spoke about the implementation of the program’s four pillars: virtue, mentoring, ceremony and Catholic identity.

Huth believes SportsLeader will enable the school’s athletic program to bring students into a closer relationship with God.

SportsLeader promotes a virtue each week that the teams incorporate into their meetings, practices and games. For example, when the virtue was self-control, the coaches spent some time discussing with their athletes its meaning and circumstances that might offer an opportunity to demonstrate the virtue of self-control. The coaches recognized when athletes exhibited the virtue and commended their efforts. At the end of the school year, select athletes are presented with the Kneeling Knight Award for their exemplary fortitude.

Senior Kat Knapke looks forward to getting a new virtue each week and reviewing virtues of previous weeks with her teammates, because “it breaks down what it means to be a good teammate and have good sportsmanship.”

The second pillar of the program is mentoring. Coaches meet with individual athletes or small groups on a weekly basis, at which the coaches learn more about their athletes and the athletes build a strong relationship with their coaches.

Joseph Klinger, a junior, was admittedly skeptical of the program at first, but he said he is now very impressed. “Many things are number-based. SportsLeader focuses on team building and relationships with coaches, and I feel comfortable going to them with anything.” 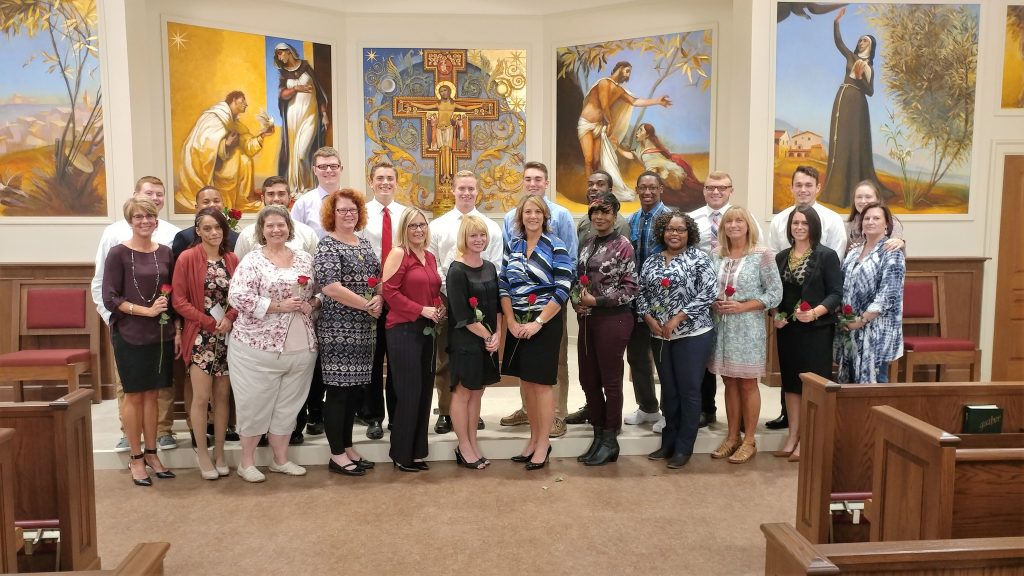 Bishop Luers High School football team members gathered in the Chapel of Saint Francis of Assisi earlier this school year to present letters, which were read aloud, and roses to their mothers. Ceremonies like this one, in Fort Wayne, are components of a comprehensive Catholic school sports culture program called SportsLeader, which devotes itself to encouraging virtuous behavior among student athletes. — Provided by Bishop Luers High School

The third pillar is ceremony. There are two ceremonies for each team: The first ceremony is when the athlete’s father presents his athlete with a team jersey, reaffirming the love and appreciation he has for his child in front of the other fathers and other athletes. Everyone soon learns, through this emotional ceremony, that every father cares for every athlete — which, in turn, makes for a more cohesive team. This was very beautifully displayed recently, when an exchange student and volleyball player’s father found himself needing to return to Mexico shortly after the ceremony. During the ceremony, he spoke to his daughter entirely in Spanish, and no one else really understood what was being said — but there was not a dry eye to be found. Each player hugged her teammate and vowed to love and support her the rest of the school year, during her father’s absence.

Midway through the season a second ceremony takes place with mothers. The athletes write letters of appreciation to their moms and have an opportunity to open up to them in front of others. “It’s hard,” Huth said, “but I think it’s going to be worth the journey when we get to the end.”

The program includes prayer before and after games. Athletes are encouraged to express themselves in overtly Catholic ways, which so far has been received well by the competition. In girls soccer this year, the team captains from both schools met for pre-game meetings, and the opposing teams were invited to join Bishop Luers players in prayer on the field at the conclusion of the game. Every visiting team, including the public schools, participated in the prayer.

Bishop Luers High School Athletic Director Kevin Godfroy sees great potential in the school’s relationship with SportsLeader — particularly the strength in evangelization and community building. “I think it will be a great opportunity for relationships to be built between our families, by seeing the emotional ties they have with their own children and help connect each other.”