In Genesis, God created male and female. He gave them different interests and struggles. That’s why Dan and Linda Landrigan wanted to bring a program specifically geared toward each gender to the Fort Wayne area.

Four years ago, Dan began searching for something to draw teenage boys at their parish, St. Elizabeth Ann Seton, deeper into their faith.

“One of the things we were struggling with is that so many friends of our kids’ had drifted from the faith. They needed something to give them a Catholic identity at this critical time — middle school and high school,” he said.

Through the advice of his son, Deacon Benjamin Landrigan, a seminarian at Mount St. Mary’s in Emmitsburg, Maryland, he decided to look into something called Fraternus — a male-centric program that uses mentorship to instill virtue in young men from sixth grade through high school.

“We looked at the website and I was immediately interested,” Dan related. “I could immediately see that it was geared for men and boys. And it was all about a challenge,” a challenge to live a genuine Catholic life. 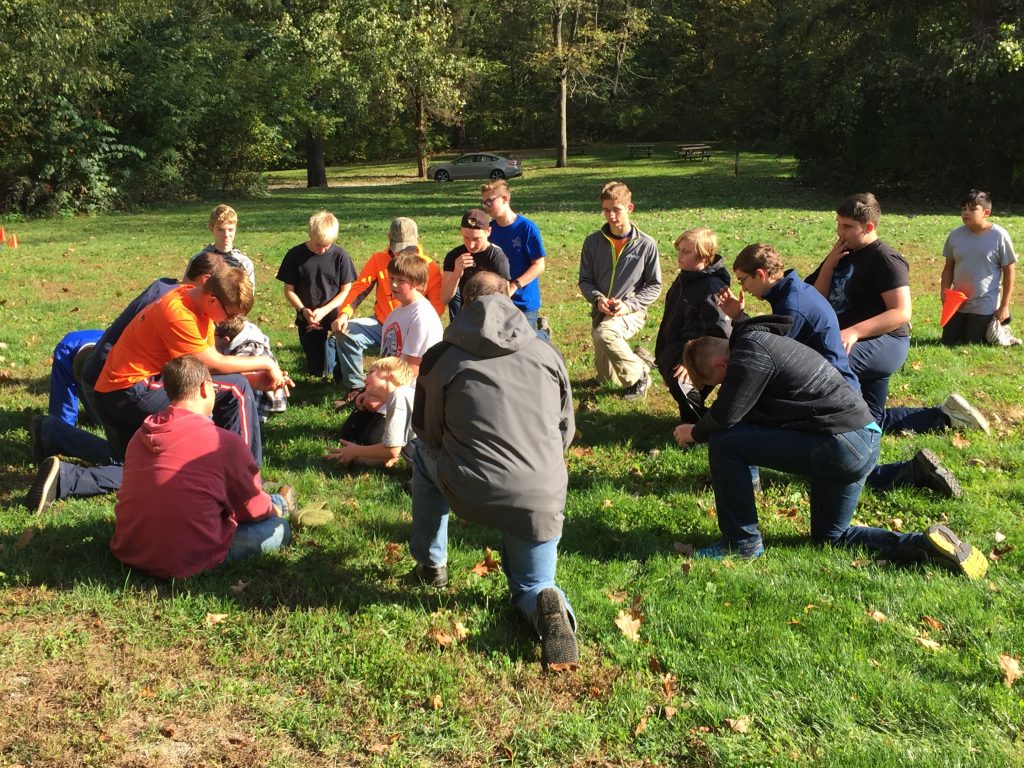 Photos provided by Linda Landrigan
The principle of brotherhood with a faith element that’s deeper than that of a sports team is what drew St. Elizabeth Ann Seton parishioner Dan Landrigan to bring the Fraternus virtue-building program to Fort Wayne. Here, a group of boys prays together after a Fraternus activity last fall.

Although he was unsure if he would find other men willing to give their time every week to the program, Dan forged ahead with the full backing of his pastor, Father David Voors. To his amazement, they were eager to get involved. In the first year, the program flourished.

With the success of Fraternus,  the parish turned toward the young women. Linda began researching an organization complementary to Fraternus, called Fidelis. She, too, sought out women of the parish who would help organize the program and was immediately rewarded with many volunteers.

“This was really out of my comfort zone, and it was really the work of the Holy Spirit that I was able to approach people and for them to respond the way they did. It was kind of mind-blowing that it happened,” Linda confided. Using Fraternus’ model “with a feminine perspective,” she moved forward. The first Fidelis meeting brought out 45 girls.

Fraternus and Fidelis have been going strong since 2017 and 2018 respectively, drawing combined numbers of over 100 kids on an average week. Most of the young people are St. Elizabeth parishioners, but Father Voors and the Landrigans were adamant about including nearby parishes, too. About a third now come from other parishes in the city as well as from Arcola, Huntington and even as far away as Berne. “They’re convinced it’s a good program,” Dan stated. 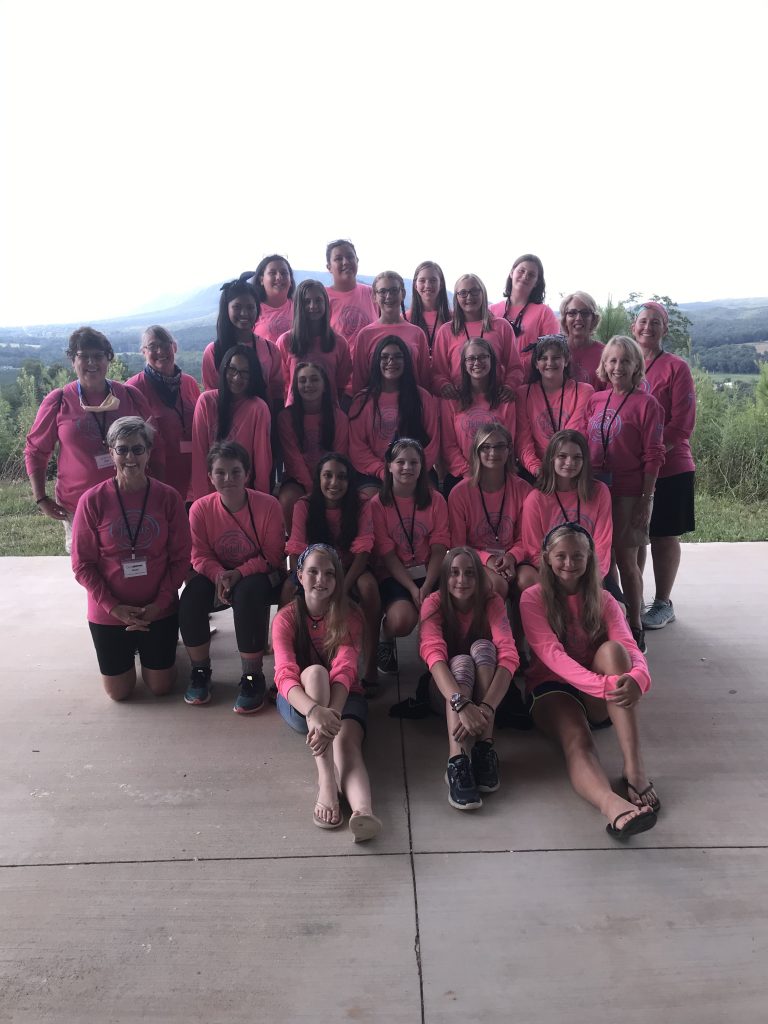 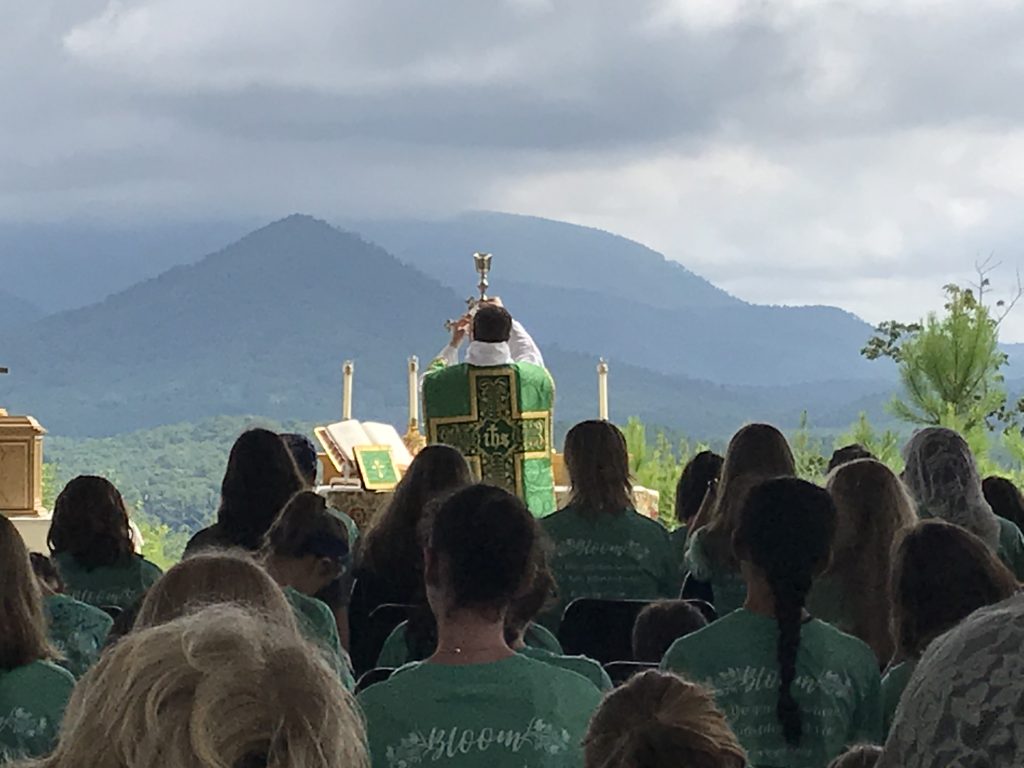 Photos provided by Linda Landrigan
Several members of the girls’ group Fidelis attend a summer retreat in Tennessee known as “Inspire” in 2019. Daily Mass was one of the most uplifting aspects of the retreat, they said, with the mountains of Tennessee providing a beautiful backdrop to the liturgy.

It is, according to the participants. Julia Langford has been involved in Fidelis for two years and is now in high school. Fidelis taught her how to live out specific virtues in a practical way through video clips, group discussions and the “King’s Message,” delivered by an adult mentor or an older member that ties the discussion and movie clip together with that virtue.

Brothers Dominic and Tyler Minnich have both been in Fraternus for three years. Dominic, the elder brother, said first it was the “games that brought me in, then it was the prayer, the brotherhood, the community … those fill us and strengthen us.” He urges any boys interested to “at least try it.”

Tyler has seen the spiritual fruits growing in his own life through Fraternus. “The leaders are constantly refreshing the faith, reminding us about the battle between the devil trying to take your soul. They’re always putting you on the right track to draw closer to God.” 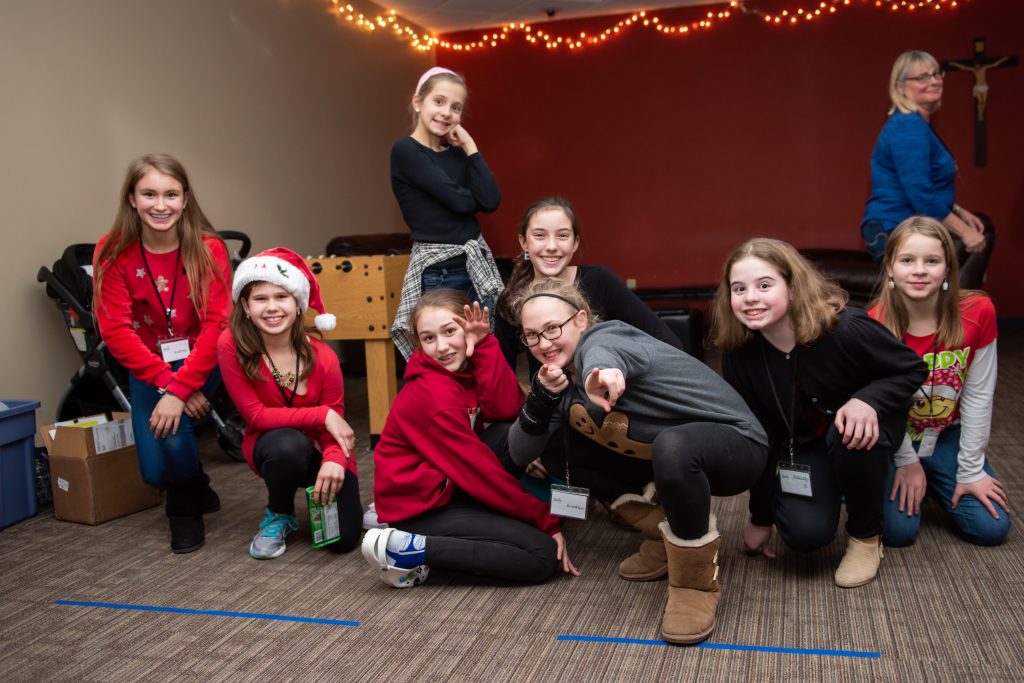 Fraternus and Fidelis are not youth groups. The focus of each is virtue-building through mentorship. In fact, Fraternus was developed when a group of men saw the need for strong male father-figures in modern society, men who could exemplify the Catholic faith. The Fraternus website states that “boys can only learn to be men from men, and men are fully men when they live the fatherly mission that is uniquely theirs.”

This mentorship aspect requires a great deal of adult assistance – nearly one adult for every two to three youths. But Dan commended the team that has stepped up. “The men who became involved … feel like they get as much out of it as the boys.”

As they grow and mature, older students are given greater leadership opportunities, such as giving the weekly “King’s Message” and modeling the faith for younger members.

Aside from the weekly meetings, one of the most powerful aspects of Fraternus and Fidelis is the yearly Challenge Ceremony. Here, the young men and women commit in front of their family and peers to make living virtuous lives a priority. As the young men come forward and kneel at the altar, the Fraternus sword is placed across their upraised palms, signifying their acceptance of the challenge placed before them. This symbolism is used because “Fraternus” is Latin for “brotherly” and is represented by a sword. “Fidelis” means “faithful,” depicted by a crown.

The young women similarly kneel and are asked if they accept their inheritance as daughters of the King. Linda explained, “It’s kind of a way of getting them to think about where they are in God’s eyes and as a woman.”

Each group has a yearly retreat to Tennessee — “Ranch” for Fraternus, “Inspire” for Fidelis — which, similar to the weekly meetings, incorporates faith and fun in a weeklong camp setting. Both Minnich brothers attended Ranch this year, and declared it was an exceptional experience. They particularly enjoyed celebrating daily Mass in the Tennessee hills. “We’ve seen the retreats and the summer camp have allowed some kids who were shy and quiet to blossom,” Linda stated.

Keeping boys and girls separate is essential to the success of the programs. As Linda put it, “it’s hard enough to speak out among your friends. When you don’t have that element of the opposite sex, I think that’s been beneficial for the program.”

Langford said much the same thing. “I really like that it’s all girls, because then the activities and talks can be meant more for us … I really like having the sisterhood that Fidelis offers.”

The need for boys- or girls-only ministries has not gone unnoticed. In dioceses across the country, participation in both groups has expanded during the last 10 years. Aside from a large presence in the south, where they began, they have spread as far north as New York state on the East Coast and Washington on the West Coast. There are now over 15 chapters in the country, with parishes often jointly coordinating Fraternus and Fidelis groups.

The simplicity of the program appeals to leaders who work full-time too, as a corporate chapter creates the content and leaders simply follow it. For anyone interested, Dan eagerly welcomes visitors to come and see the groups in action when they resume at the end of August.

They are more than happy to oblige visitors, even hosting Bishop Kevin C. Rhoades. He interacted with both Fraternus and Fidelis last fall.