The prayer, music and song commemorated a time of great sadness and unimaginable evil. Yet, people walked out inspired by hope.

“I hope this service will move all our hearts as we remember the evil of the Holocaust and resolve to eradicate all hatred and violence from our community and the world,” Bishop Kevin C. Rhoades said in welcoming remarks. “I thank God for the deep bonds that unite us in faith and love this evening, and I pray that we may walk together as a people of hope in our commitment to the common good, our deep respect for the dignity of every human person, and our pursuit of peace.” 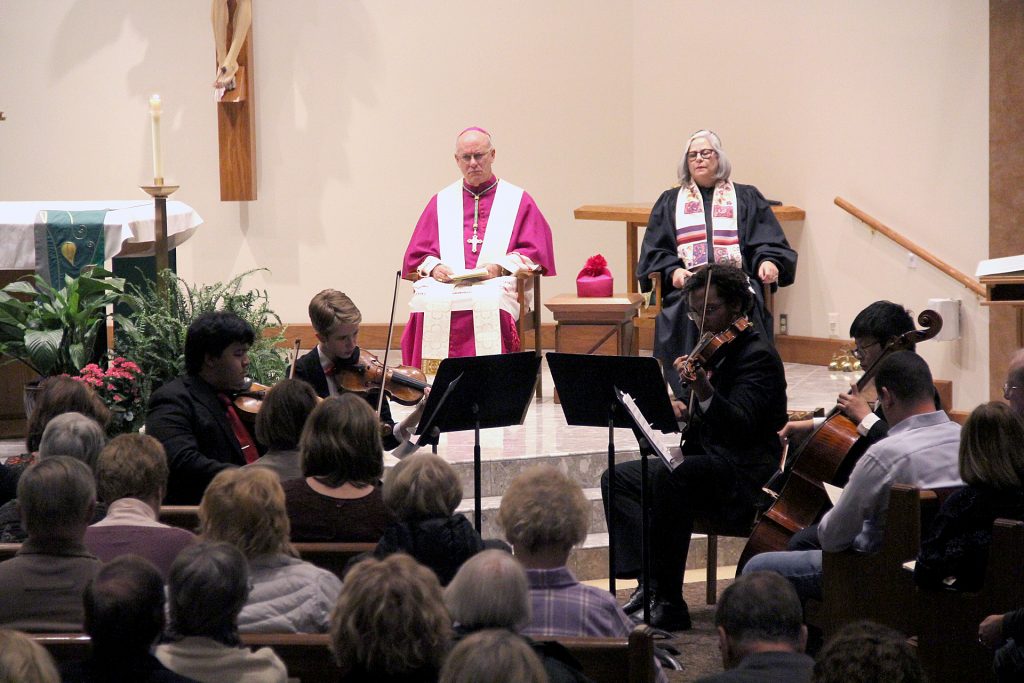 The gathering was one of many events held Nov. 9-Dec. 1 as part of the Violins of Hope project’s visit in Fort Wayne. Activities ranged from an art exhibit of historic string instruments to presentations, radio and television programs, and concerts featuring local musicians playing the instruments.

The instruments previously had been played by Jewish people who died in the Holocaust or whose lives were altered by it. From about 1940-45, the Nazi regime systematically killed 6 million Jews and many other prisoners, people with disabilities and those from cultural minorities.

The Jewish Federation of Fort Wayne, the Fort Wayne Philharmonic and other organizers and sponsors brought Violins of Hope to Fort Wayne “to support and uphold Jewish culture and impart an understanding of the Holocaust while highlighting human behavior ‘from ultimate evil to ultimate good,’” said the event’s website, violinsofhopefw.org.

The prayer service opened with a welcome and thank you from Avshalom Weinstein, who assists his father, Amnon Weinstein, the master violin-maker in Israel who founded the Violins of Hope project. It continued with musical interludes, choral singing, stories about the owners of two instruments in the Violins of Hope collection and reflections by Rabbi Winnig and Bishop Rhoades. The service was based in the Psalms, a portion of Scripture shared by the Catholic and Jewish faiths because of their common heritage. 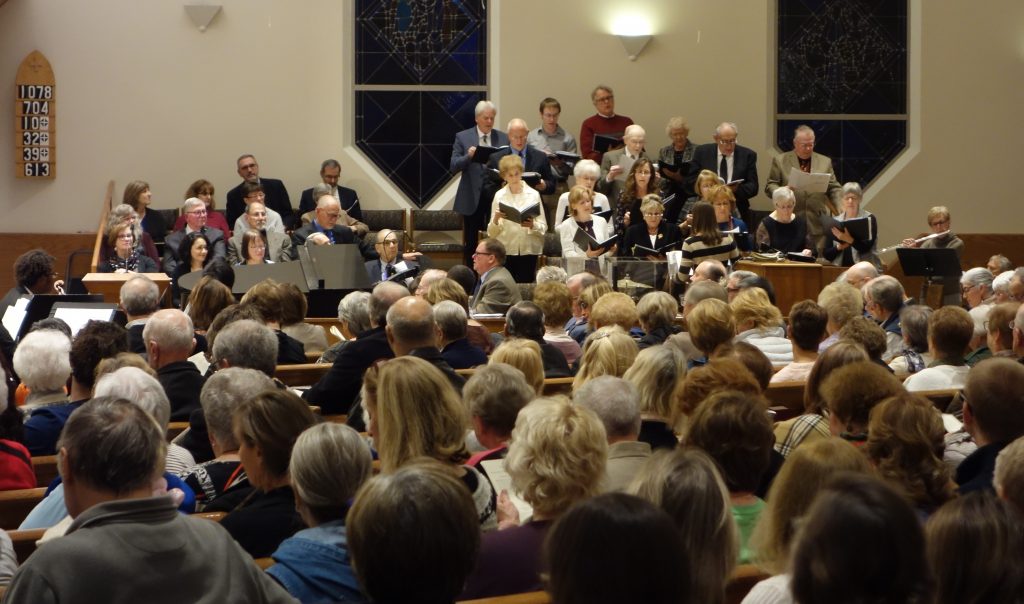 Members of the Philharmonic’s Youth Symphony Orchestra’s Premier String Quartet used four instruments from the Violins of Hope collection to perform the music, which was somber and reflective. Songs by the Hazemir Choir of Congregation Achduth Vesholom and the St. Elizabeth Ann Seton Choir maintained the same tone, though final selections by each choir looked to the future with hope.

Rabbi Winnig began her comments by speaking about Pope Francis’ remarks during his Nov. 13 papal audience in Rome. The pope said the Jewish people have suffered greatly throughout world history and warned that violence against Jews is on the increase.

“‘The Jews are our brothers and sisters and must not be persecuted! Understood?’ the pope said.” Sadly, she added, a Jewish man was stabbed on the morning of the interfaith prayer service while he walked to a synagogue in the New York City area.

She said people living today have a special obligation. “In our lifetime, the last witnesses to World War II will die.” That includes military veterans and Holocaust survivors. “It is incumbent on us to continue to tell the story. Those of us who are the survivors of today and the witnesses of today have the ability to bring God’s hope and blessings to the world.”

During his remarks, Bishop Rhoades said the Violins of Hope visit to Fort Wayne wouldn’t have been complete without the Jewish-Catholic prayer service and the lifting up local hearts and minds to the one God.

“This faith unites us,” he said. “This love inspires us. It is a faith and love that Hitler and the Nazis tried to destroy, but they were unsuccessful.”

Bishop Rhoades told of visiting the former Nazi concentration camps at Dachau and Auschwitz, where thousands of Jews and others worked in forced labor or suffered mass murder.

“I never in my life experienced the emotions that I felt during those visits, filled with sadness and deep distress in contemplating the sufferings of so many tortured and killed and contemplating the depths of the evil that can take over the human heart.”

The Violins of Hope visit reminds us always to maintain hope, the bishop said.

“When the forces of darkness seem to have the upper hand, when hatred and violence flair, we must remember the Shoah (Holocaust) and never cease crying out to God who gives us the strength to reject and fight evil and the courage to love and do good.”

“It was powerful,” said Rich Hines, a member of the St. Elizabeth choir. “You could see people were fully into it.”

“It touched everybody who came,” said Father David Voors, St. Elizabeth pastor, and Deacon Jim Kitchens said his own emotions ranged from tears to hope.

“I’ve had endless people walk up to me and say, ‘We should do this again,’” said Deacon Kitchens, who has studied history and the Holocaust extensively. “I agree.”