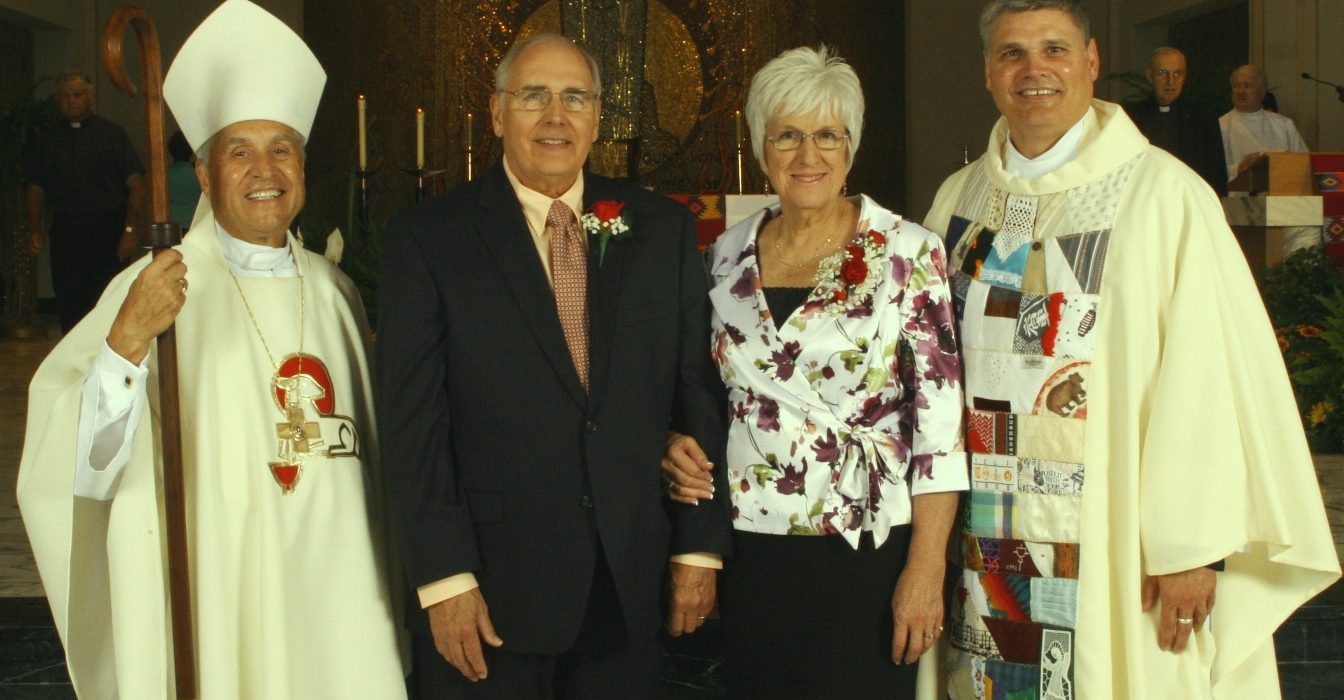 Bishop Joseph Charron, CPPS, retired bishop of the Diocese of Des Moines, anoints Vince Wirtner III’s hands with chrism oil at his Ordination into the Priesthood of the Society of the Precious Blood on Saturday, June 12, at St. Charles Chapel in Carthagena, Ohio.

FORT WAYNE — Fort Wayne native Vincent Wirtner III was ordained as a Precious Blood priest by Society of the Precious Blood Bishop Joseph Charron, retired bishop of the Diocese of Des Moines, on Saturday, June 12, at St. Charles Chapel in Carthagena, Ohio. The solemn ceremony was witnessed by family members, friends and supporters of the gregarious Father Wirtner.

Father Wirtner is the oldest of Vince Jr. and Charlene’s three children and enjoyed a Catholic education at St. Joseph School and Bishop Luers High School.
As a boy Father Wirtner recalls being involved at his home parish at an early age. Inspired by his very active parents, the young Wirtner served as altar boy, sang in the choir and was a regular in the youth group.

“I loved going to church, being part of the community,” says Father Wirtner.

The seed for a vocation, he says, was planted at an early age when in fifth grade he recalls how “comfortable it felt to be at the altar close to the priest and the Sacrament.”

His friends teased with “You’d be a good priest!” and though he usually replied with a resounding “no!” he admits now that a “maybe” rested firmly in his mind.
He attributes the germination of that vocation seed to the priests who served in his life. “They helped me understand the call by being good role models. Not always directly — but by the lives they led,” he recalls. 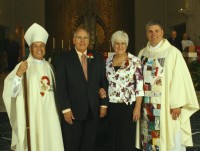 Newly ordained Precious Blood Father Vince Wirtner III, right, poses with his parents, Vince Jr. and Charlene, and Bishop Joseph Charron, CPPS, retired bishop of the Diocese of Des Moines, following the solemn ceremony of Ordination. Father Wirtner wears the quilted chasuble sewn for him by his mother using fabric pieces sent to her by family, friends and supporters of the new priest.

Following his graduation from Bishop Luers in 1981, Father Wirtner began a 13-year career at St. Joseph Hospital, where he “worked his way around the hospital,” experiencing life from unit clerking to the emergency room. During the mid 1990s, Father Wirtner began a nursing program that would culminate in an Licensed Practical Nursing degree, after which he worked in health services at Lutheran Hospital and a summer camp for children stricken with cancer as well.

Later he became youth minister at St. Joseph Parish and was involved in the Teens Encounter Christ program for 10 years.

Then in 1997 Father Wirtner accepted the campus ministry position at Bishop Luers High School, where he ministered to the students for four years. His time at Bishop Luers “immersed in the teens’ world,” helped him develop a sense of compassion and a new awareness of his calling to the priesthood.

The neon sign he looked for affirming his desire to become a priest came during a campus visit from Bishop John M. D’Arcy, who asked Wirtner if he had ever considered being a priest. Wirtner admitted he had, but was looking for a sign and recalls with glee that the two men looked at each other and laughed with delight at the irony of the conversation.

Father Wirtner was attracted to the Precious Blood Order after working side by side with its members at St. Joseph Hospital.

“They were real,” says Father Wirtner, adding “I was attracted to the lives they led. It was like how I saw myself being.”

So in 1999 he attended a discernment retreat at St. Charles in Ohio where the motherhouse of the Precious Blood Order is located, where he says, “It felt like I was home.”

As he began to learn more about the spirituality of the order, the symbolism of the blood he witnessed in the medical field and the Precious Blood of Jesus was not lost on him. “I connected on a much deeper level with Precious Blood,” he says.

The Society of the Precious Blood is considered a Society of Apostolic Life — different than a religious community. The work, rather than the community, drives the Precious Blood priests and brothers, who make promises to live a simple life, with fidelity to the community and Church, rather than a profession of vows.
In 2001 Father Wirtner entered initial formation, during which he earned a bachelor’s degree in religious studies. Following initial formation he made his first commitment, which began a 13-month special formation program of travel and education.

Interim summer assignments included assisting at a parish on a Navajo Reservation in New Mexico, as well as at St. John the Baptist in Whiting, Ind. During a life internship, Father Wirtner lived in Florida with Precious Blood priests to understand community life more fully.

Father Wirtner returned to Ohio in 2006 to make his temporary incorporation before moving to Chicago to earn a master of divinity degree from Catholic Theological Union. He was ordained into the temporary diaconate in June of 2009 at Immaculate Conception Parish in Celina, Ohio.

At the ordination, Father Wirtner was vested in a quilted stole and chasuble that his mother lovingly sewed for him, using patches of cloth ranging from a patch of shirt to 100-year-old cloth from his great great grandparents’ wedding garments, that friends, family and supporters sent at the family’s request. The chasuble, says Father Wirtner, “brings us all together to celebrate how they all helped grow this priest.”

The newly-ordained Father Wirtner celebrated a Mass of thanksgiving on June 13 at his home parish of St. Joseph in Fort Wayne with a reception that followed. He feels a peace with his ordination into the priesthood and says, “This is the place I’m supposed to be.”

Father Wirtner has been assigned as vocations minister to the Cincinnati Province. He will reside in Dayton, Ohio, where in addition to his vocation ministry duties he will assist at Precious Blood Parish there.