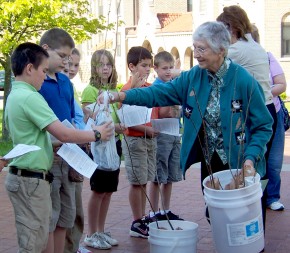 HUNTINGTON — Stewardship of the earth’s natural resources has long been a part of the mission of Our Lady of Victory Missionary Sisters, and recent events at Victory Noll serve as an example of how the sisters have drawn on their past conservation efforts with an eye always on the future.

For the past 40 years, Victory Noll has celebrated Earth Day and Arbor Day with blessings of their grounds and planting of new trees around the 150-acre campus, located on the west side of Huntington. Each year, students from Huntington Catholic School are invited to take part in the event, and each student takes home a sapling tree to plant at their own home. This year’s program was held on April 30, with students and sisters celebrating with songs and prayers.

On the same day, the Victory Noll Sisters took another step to maintain the health of their grounds with the installation of a windmill. The windmill was positioned next to Lake Kateri, a pond that is home to a variety of wildlife and includes a small wetlands area supporting various waterfowl. The windmill harnesses the forces of nature to help aerate the pond and improve the ecosystem for fish, frogs, turtles and other animals using the pond.

Since they arrived in Huntington in 1925, the Victory Noll Sisters have cared for their grounds, which sit on a hill overlooking the Wabash River Valley. The area once was maintained as farmland, and it also included orchards. The sisters took part in the harvest and even took care of their own bee colony that helped to pollinate the fruit trees. Flowers and other flora are in bloom with ever-changing colors throughout the seasons, culminating with a spectacular final burst of color in the fall.

The sisters created the Cherish the Earth Committee, which guides the course for the community’s efforts in taking care of the grounds. Sister Mary Joan Ginsterblum was part of the initial efforts in the conservation and environmental efforts, and even now at 90 years old, she still takes an active role in maintaining the grounds and directing efforts for new initiatives.

“It’s a really special place here because of the variety of what we have, and how we’ve taken care of it. We’ve tried to keep it beautiful,” says Sister Mary Joan, who joined Our Lady of Victory Missionary Sisters in 1939. “It brings you close to God. God gave us all this. I find it real hard to sit in the chapel and think of God, but if I walk outside, there’s no end to it. I can praise God for so much. He’s given us so much beauty here.”

The farmland has been replaced by areas of native prairie grasses supporting numerous bird species and other wildlife. There are wooded areas that are home to deer. On the southern end of campus, a hillside was turned into a wildlife corridor as a variety of tree species were planted to not only stabilize the hillside but to provide habitat for animals and birds. Sister Mary Joan maintains more than a dozen birdhouses on the grounds.

“When I was a younger sister, one of the other sisters got me interested in birds,” says Sister Mary Joan. “She gave me this great big book and told me to study the birds. I didn’t have any binoculars or know anything about birds, so I went out and looked in all the bushes, and I could see these little sparrows and their nests. For years, I’ve kept charts to keep track of the birds I see and I check it every week.”

A number of trees across campus include tags identifying the species of tree, and also includes the name of a Victory Noll sister. Each sister, past and present, has a tree dedicated in her honor, now totaling more than 350 trees. Additional trees have been donated to Victory Noll over the years, and those also include markers. Sister Mary Joan maintains a catalog of each tree’s type, location and associated sister.

“Another sister and I went through the woods and made a trail. We wanted to put tags on the trees, but we didn’t know what kinds of trees they were,” says Sister Mary Joan. “So I would gather up leaves and look them up, and I started making a book of all the trees on our grounds. Then I started on the wildflowers. I would draw them and watercolor them in a book as a catalog to the different kinds here. It’s been very interesting to be here at Victory Noll. I feel that the trees and the flowers are my friends and that they are part of us.”

In 1989, a summer storm toppled part of a large blue spruce tree at Victory Noll, with only the bottom 10 feet of the tree left intact. Sister Mary Joan had the bark stripped from the dead tree and she spent the rest of the summer carving a peace pole. The pole honored the Miami Indians who once lived on the land, and contains many Native American symbols. There is a peace prayer carved in both English and Spanish, along with “pehkokia,” the Miami Indian word for peace.
The peace pole is the centerpiece of the Miami Memorial Peace Garden, also created and still maintained by Sister Mary Joan.

Many other areas take advantage of the natural beauty of the Victory Noll campus.

The Victory Noll Cemetery is surrounded by the land’s original wooded area. The cemetery is the final resting place of many of the sisters, as well as Our Lady of Victory Missionary Sisters founder Father John Joseph Sigstein and Archbishop John Francis Noll, the primary benefactor in bringing the Victory Noll Sisters to Huntington in 1925. Stations of the Cross are built into the natural hillside at Victory Noll. Most recently, a labyrinth was constructed on top of the hill overlooking the valley. The labyrinth is a popular stop for reflection for those visiting Victory Noll Center, which provides programs for spiritual growth, personal development and social justice education.
The new windmill may be the newest sight on the Victory Noll campus, but Sister Mary Joan says the work will continue to go on.

“We’re putting in a birdbath, and we’re going to put in a new hummingbird feeder in an area where our sisters who can’t get outside can still enjoy watching out the window,” she says. “We keep thinking of new things to do. God provides.”