NEW HOPE, Minn. (CNS) — A German Messerschmitt fighter plane was bearing down on Don Stoliel’s B-17 bomber as he flew a mission during World War II.

Stoliel, the pilot, looked out the windshield of his cockpit and saw the enemy plane zooming straight at him with machine guns blazing.

“This is it,” he thought, as he braced for the barrage of bullets that he expected to blast through the glass and tear into his body.

It didn’t happen. Not one piece of lead penetrated the cockpit. The reason? Stoliel, a member of Sacred Heart in Robbinsdale, believes he had a layer of protection no German machine gun could penetrate — a first-class relic of St. Therese of Lisieux. 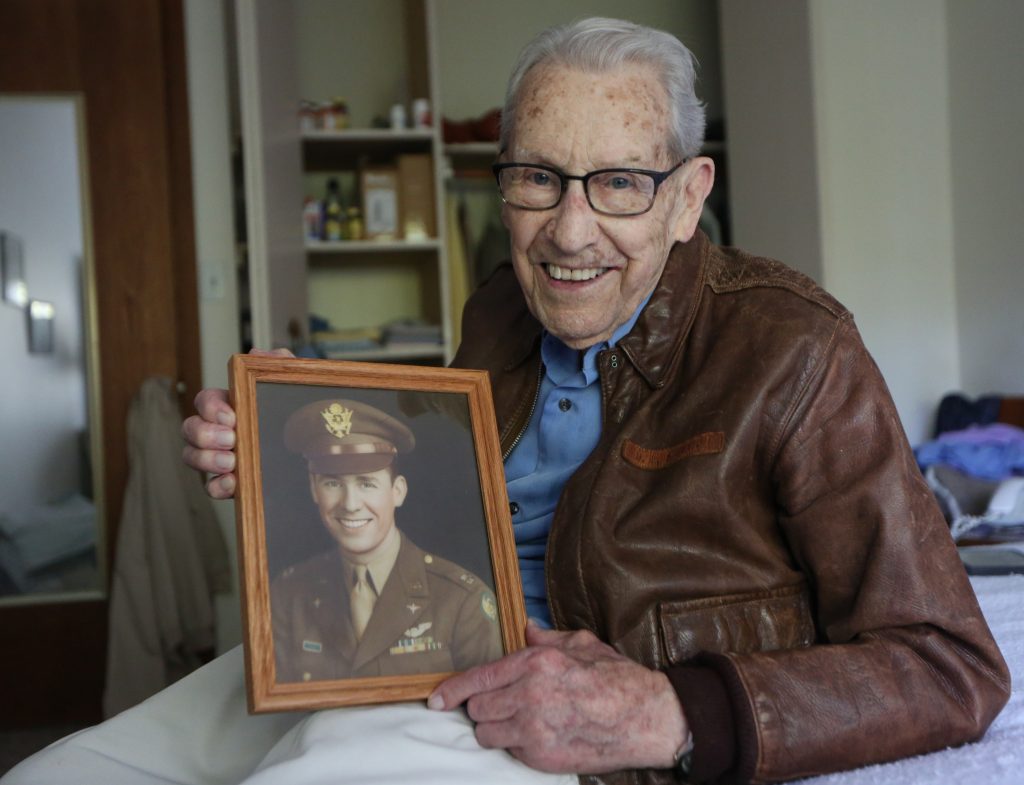 Don Stoliel of Sacred Heart Parish in Robbinsdale, Minn., holds a picture of himself Sept. 6, 2019, which was taken near the end of his tour of duty in World War II as a B-17 bomber pilot. He carried a relic of St. Therese of Lisieux in the cockpit during all of his 31 missions and credits the saint for his survival. (CNS photo/Dave Hrbacek, Catholic Spirit)

Tucked into the pocket of his uniform pants, it was with him on every mission. He believes St. Therese kept him alive in the cockpit during six months of bombing runs that ended in 1944 when he reached the end of his tour of duty and returned to the United States.

The then-22-year-old got the relic from a chaplain, Father Edmund Skoner, at an airfield in Molesworth, England, shortly after arriving in December 1943.

After surviving 31 bombing missions into Germany, Stoliel came to believe that St. Therese was watching over him. He escaped several close calls and saw other planes flying near his get hit and go down. Nary a bullet touched his cockpit. Only once did a member of his 10-man crew get injured. None were killed.

“St. Therese, oh, she took care of us — absolutely,” Stoliel told The Catholic Spirit, newspaper of the Archdiocese of St. Paul and Minneapolis. “She means just about everything because I wouldn’t be here now if it wasn’t for St. Therese.”

Today, the 98-year-old, who married after the war and had four children with his late wife, Shirley, is as passionate as ever about his favorite saint, “The Little Flower.”

Fittingly, he lives at a facility in New Hope that bears her name: St. Therese of New Hope. He has told his story numerous times, both to Sacred Heart parishioners and students at Sacred Heart Catholic School.

Stoliel crossed paths with the relic by chasing his boyhood dream of becoming a pilot. He had what he called “a romance with the clouds.” Growing up in Olivia about two hours west of the Twin Cities, he often would run out of his house to watch World War I-era planes fly overhead.

After graduating from high school in 1938, he enlisted in the Army National Guard in 1940 with the hope of becoming a pilot. He was placed into the regular Army after the Japanese attack on Pearl Harbor Dec. 7, 1941. Transferred to Camp Haan in California, he noticed a nearby aviation training facility called March Field.

“I used to watch those B-17s take off over at March Field,” he said. “My body was in Camp Haan; my heart was over there across the road at March Field. I wanted to get in the (Army) Air Corps.”

It took some persistence. Initially, he was assigned to operate anti-aircraft artillery. That landed him in Alaska, where U.S. forces were anticipating a Japanese attack. For several months, it looked as though his military tour would involve firing at enemy fighter planes.

“But, I still had my heart in the air,” he said. “I wanted to do that more than anything else in the world.”

With the help of a commanding officer, he was able to go to Anchorage to apply for aviation cadet training in the Army Air Corps (now called the Air Force). He was rejected the first time because of a medical condition, but eventually passed in June 1942. The news “was like going to heaven,” he said.

Once in flight school, he chose to be a bomber pilot and was assigned to the 303rd Bomb Group in Molesworth. There he met the chaplain who gave him the relic.

Stoliel wants to make sure his story — especially the part about the relic — lives on. After carrying the relic in his pocket for decades after coming home, he gave it to the pastor of Sacred Heart, Father Bryan Pedersen, three years ago.

The two met just a week after Father Pedersen came to Sacred Heart in 2008. They forged a friendship through weekly breakfasts at a local restaurant after morning Mass, and built a trust that motivated Stoliel to place the relic in his pastor’s care.

“I just felt humbled that he would want me to have that relic,” Father Pedersen said.

Meanwhile, Stoliel continues his devotion to St. Therese. He currently is reading her autobiography, “The Story of a Soul,” and also makes regular visits to a smaller, secondary prayer space at his care facility called Little Flower Chapel. He goes to this chapel for Mass twice a week and tries to stop by daily to acknowledge the saint’s help in the cockpit of his B-17.

“I go by there and I’ll say, ‘Thank you, Therese, for 31,’” he said. “She got me through those 31 missions without a scratch. There were some mighty, mighty, mighty close calls.”

Father Pedersen is glad to have the chance to know someone from what is known as The Greatest Generation.

Stoliel is “a man of service, and dedicated to country, to family and to his faith, the Catholic faith in particular,” he said. “We need more men like Don Stoliel today. Our world, our country would be far better off.”

Hrbacek is a photographer/reporter at The Catholic Spirit, newspaper of the Archdiocese of St. Paul and Minneapolis.