WASHINGTON (CNS) — The incorrupt heart of St. John Vianney, the patron saint of parish priests, “reminds us God uses instruments to be ministers of his grace and mercy,” said Archbishop Christophe Pierre, apostolic nuncio to the U.S.

He celebrated a nearly two-hour Mass Dec. 9 at the Basilica of the National Shrine of the Immaculate Conception that opened a four-day public veneration, which he prayed “would help people ask for the grace to change their lives.”

A six-month tour will take the holy relic of the saint popularly known as the Cure d’Ars across the United States. Sponsored by the Knights of Columbus, the “Heart of a Priest” tour was launched in wake of the clergy sexual abuse crisis in the Catholic Church. 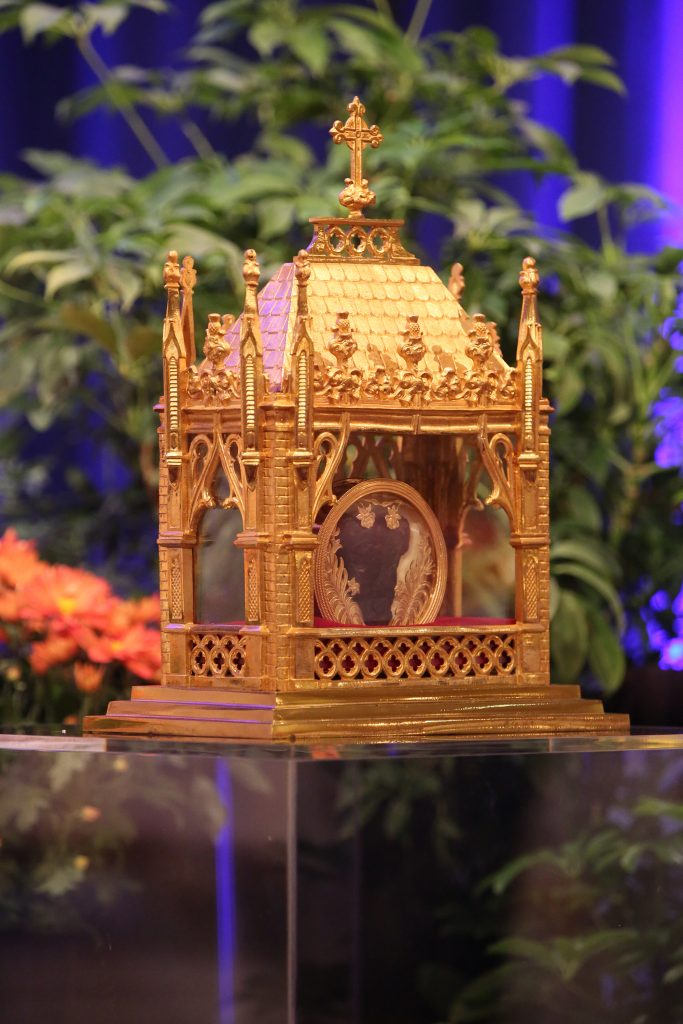 A relic of St. John Vianney is displayed before Mass Nov. 12 at the fall general assembly of the U.S. Conference of Catholic Bishops in Baltimore. (CNS photo/Bob Roller)

Supreme Knight Carl Anderson, CEO of the Knights of Columbus, said in statement that St. John Vianney offers an example to help the Church heal and rebuild.

“We now welcome as providential this opportunity to invoke the intercession of the patron saint of parish priests, whose holiness and integrity is a singular model for clergy,” Anderson said in his statement.

St. John Vianney was born in 1786 and served as a simple parish priest in the French town of Ars. He was known to spend as many as 18 hours a day hearing confessions from people who traveled from throughout Europe to see the priest who was known for his holiness and piety. He also had a great love of and fostered devotion to St. Philomena. He died in 1859.

Pope Pius XI canonized him in 1925 and proclaimed him patron saint of parish priests in 1929. His incorrupt body and heart are displayed at his shrine in Ars.

With a trumpet fanfare and solemn procession, the holy relic was brought into the Crypt Church at the national shrine in Washington and placed at the altar in front of an icon of the priest. It was to be on display through Dec. 12. 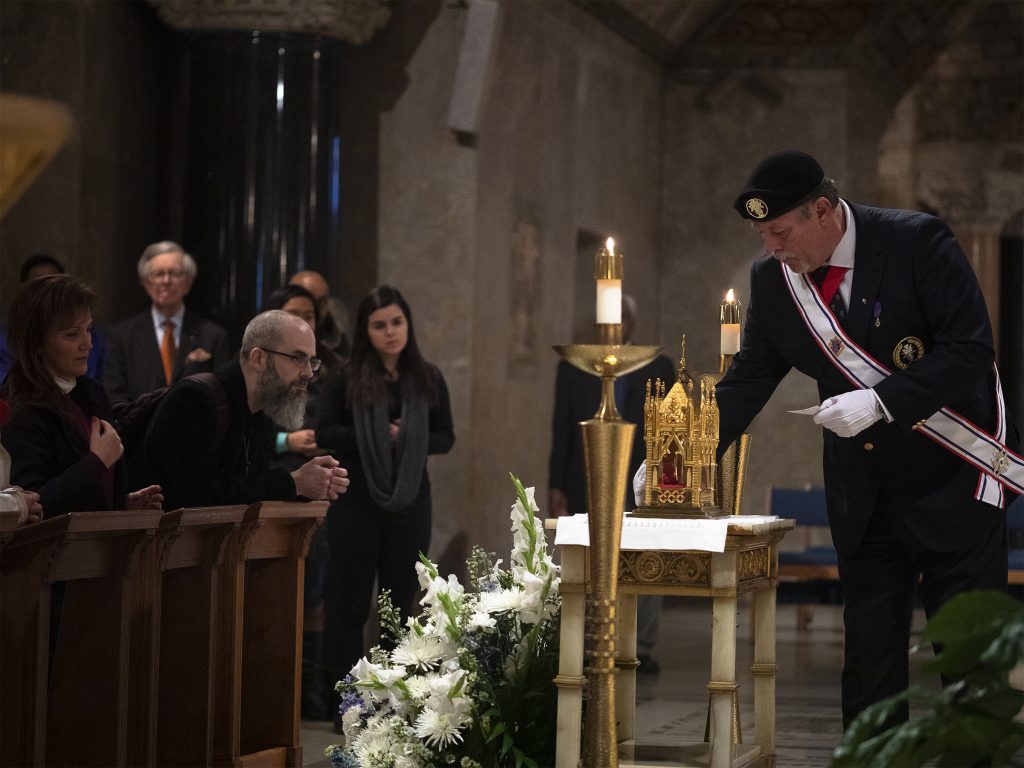 Worshippers kneel in prayer as a member of the Knights of Columbus adjusts items around the reliquary containing St. John Vianney’s incorrupt heart Dec. 10 in the Crypt Church at the Basilica of the National Shrine of the Immaculate Conception in Washington. It will be on display at the national shrine through Dec. 12. (CNS photo/Tyler Orsburn)

During the opening Mass, which drew 1,500 people, Archbishop Pierre called St. John Vianney “a man of faith.” He noted the saint “was not a particularly handsome man. He did not have a beautiful voice, and it was well known that he was not very clever or good at studies … but St. John Vianney had so much love. And, what did he offer the people? Forgiveness and mercy.”

Veneration of the saint’s heart “offers prophetic witness in a country that does not want to hear about forgiveness or mercy,” Archbishop Pierre said. “He (St. John Vianney) was an authentic witness to those who seek a deeper union with God.”

The Catholic Church teaches that a relic — such as the heart of St. John Vianney — is offered to the faithful for veneration, but neither the relic nor the saint is worshipped. Veneration recognizes the fact that God has worked through the saint.

The nuncio also said that veneration of the saintly priest could lead to young men to consider a vocation to the priesthood.

“Perhaps there will be three men here — or maybe more — whom the Lord will raise up to be his faithful priests,” he said.

Among those at the national shrine considering such a vocation was Marek Nowak. He said his prayers to the patron saint of priests were twofold. “I am asking St. John Vianney to guide me as I consider a vocation, and I want to pray for a change of heart for those who think the Church has let them down, and remind them of the goodness of God,” he said.

Alexander Barton said he came to pray before the sacred relic because of what he called “the two big Rs.”

“We need to show remorse and repentance,” Barton told the Catholic Standard, Washington’s archdiocesan newspaper. “This has been a rough year (for the Church), and maybe this (veneration of St. John Vianney’s heart) will start the healing.”

For Erika Torres, veneration of the sacred relic “is something that I feel I have to do. I want to ask this good priest to send us more priests like him.”

In welcoming the holy relic, the national shrine’s rector, Msgr. Walter Rossi, said the four-day veneration was “an opportunity for each of us to pray for our heartfelt petitions as well as for the healing of the Church and an increase in vocations.”

“May St. John Vianney intercede for us and open our hearts so we can see what God’s love can do,” he added.

Prior to its stop at the national shrine, the heart of St. John Vianney was displayed in Connecticut, Louisiana, Florida, Alabama and Georgia. After Washington the relic will be in Connecticut — in the Norwich diocese Dec. 13 and the Archdiocese of Hartford Dec. 22-23. It will be in Baltimore Jan. 11 and in South Bend, Indiana, on Jan. 24.

A news release from the Knights said that in between public events, the relic will travel to seminaries, religious houses and other locations for private veneration.

“John Vianney’s heart was full of love for the people of God and full of the same love Christ had for the Church, “ said Peter Sonski, manager of education and outreach for the Knights of Columbus Museum in New Haven, Connecticut, who is serving as the relic’s custodian during the tour. “I hope this pilgrimage of his heart will inspire people to pray for our priests, bishops and for the Church.”

“This is an opportunity to pray for a renewal in holiness,” he added.

Szczepanowski is a staff writer at the Catholic Standard, newspaper of the Archdiocese of Washington.