“Only through a widespread and capillary immunization of the population will it be possible to obtain real advantages in terms of public health to achieve control of the pandemic,” Dr. Andrea Arcangeli said Dec. 11.

“Therefore, it is our duty to offer all residents, employees and their families the opportunity to be immunized against this dreaded disease,” he said.

The Vatican News story said the vaccination program would begin “in the first months” of 2021, but a Vatican official posted on Facebook Dec. 11 that employees were told they would be vaccinated in January.

“It is important to educate everyone that the vaccine is not only to protect one’s own health, but also that of other people,” the Vatican News story said.

Dr. Arcangeli said the Pfizer vaccine, developed in conjunction with BioNTech, was chosen because it is the leading candidate for both European and U.S. approval, is already being used in England and has tested at 95% effective.

“Other vaccines produced with different methods may be introduced after evaluating their efficacy and full safety,” he added. 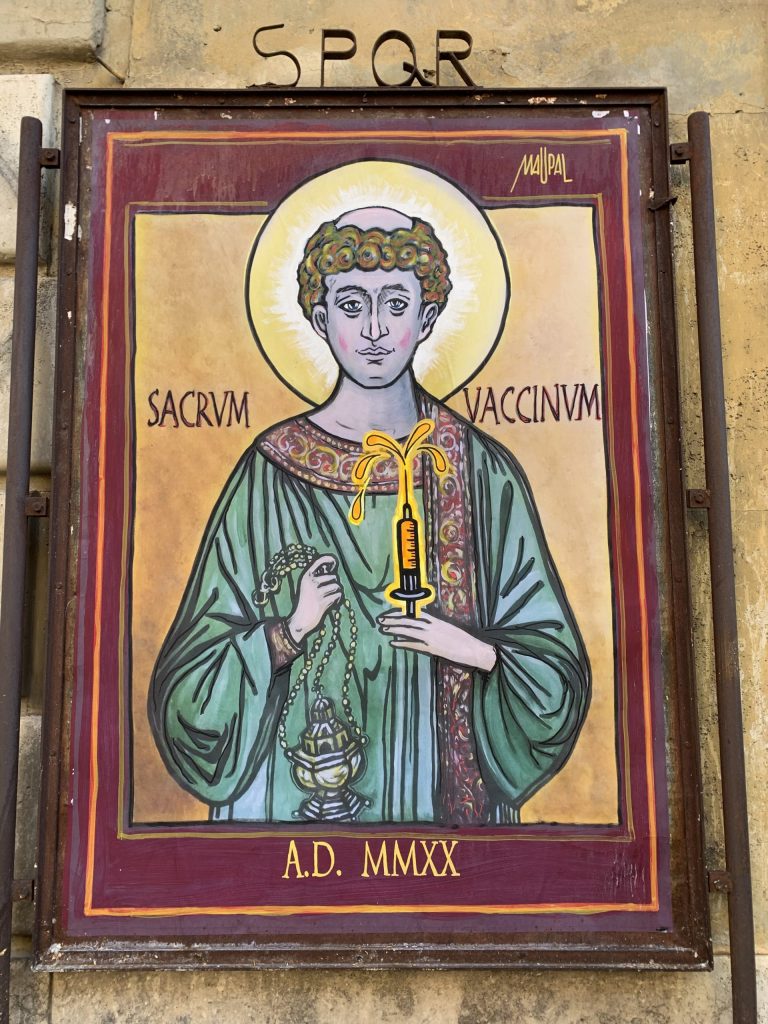 A poster of St. Stephen holding a “Holy Vaccine,” by the Rome street artist known as Maupal, is seen near the Vatican Dec. 11, 2020. Maupal told the newspaper Corriere della Sera that he chose St. Stephen, whose feast day is Dec. 26, after the Italian government said a COVID-19 vaccine might be available shortly after Christmas. (CNS photo/Cindy Wooden)

Vatican News did not ask Dr. Arcangeli about reports that in the early stages of testing, the Pfizer/BioNTech vaccine was tested on cells lines produced from cells that originally came from an aborted fetus. The vaccine, however, is not one of those that use abortion-derived cell lines in the manufacturing process.

The Pontifical Academy for Life and Catholic bishops around the world, including the chairmen of the U.S. bishops’ doctrine and pro-life committees, have said it is not immoral to be vaccinated with vaccines like the Pfizer/BioNTech product because any connection they have to aborted fetuses is extremely remote. Such cells derived from those fetuses were used only in a testing phase but not in the production phase.

Vatican News did ask Dr. Arcangeli about concerns over the safety of the vaccine.

“It is understandable that there may be some fears about a vaccine that has been developed in such a short time, but there have been very rigorous tests on safety,” he said.

For the time being, he said, the Vatican will not be recommending the vaccination of anyone under age 18 since “studies including this age group have not yet been carried out.”

As an independent country, the Vatican has its own health service, with doctors’ offices, a pharmacy, a laboratory, a walk-in clinic and first-aid stations. Many of the services are free to employees and their family members as well as retirees; the service covers about 15,000 people, including the pope and cardinals resident in Rome.