ST. PETERSBURG, Fla. (CNS) — In a remarkably frank and detailed speech, the Vatican official heading the department charged with reviewing clergy sexual abuse allegations told an assembly of Catholic journalists June 19 that his investigators and the press “share the same goal, which is the protection of minors, and we have the same wish to leave the world a little better than how we found it.” 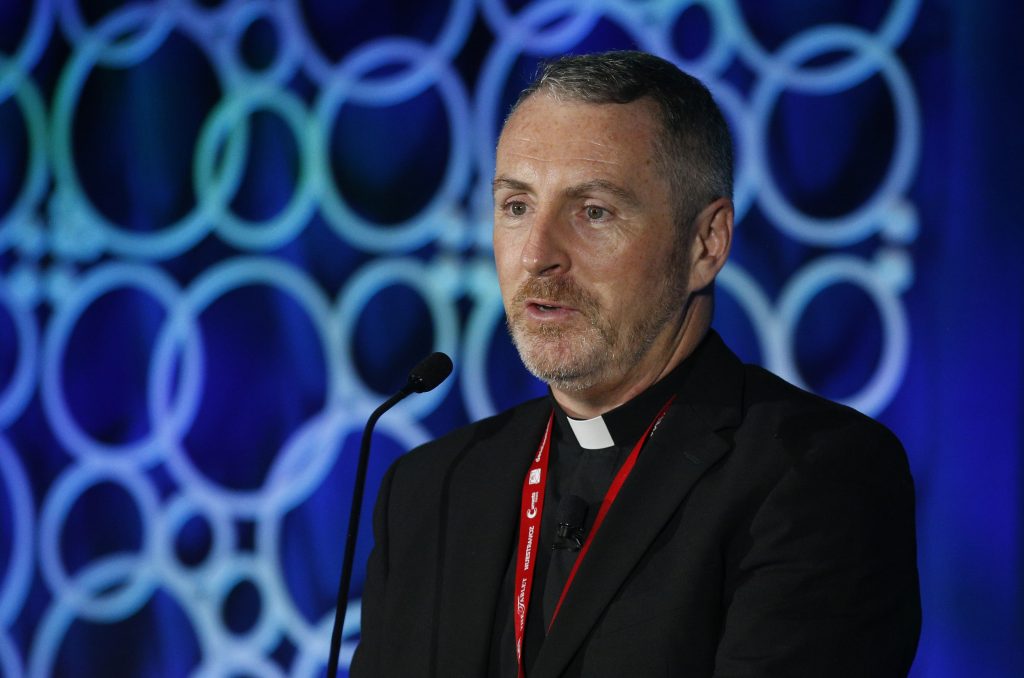 Msgr. John Kennedy, head of the disciplinary action section at the Congregation for the Doctrine of the Faith, gives a talk at the Catholic Media Conference in St. Petersburg, Fla., June 19, 2019. Msgr. Kennedy related his experiences handling clerical sexual abuse cases, and their effect on the church as well as him personally. (CNS photo/Paul Haring)

Msgr. John Kennedy, who since 2017 has headed the discipline section for the Vatican’s Congregation for the Doctrine of the Faith, described the personal toll on the 17 people in his office as they have reviewed an ever-growing tide of cases involving clergy sexual abuse or related crimes.

“I can honestly tell you that, when reading cases involving sexual abuse by clerics, you never get used to it, and you can feel your heart and soul hurting,” Msgr. Kennedy said. “There are times when I am poring over cases that I want to get up and scream, that I want to pack up my things and leave the office and not come back.”

The Irish-born priest has worked and studied in Rome since 1998. Speaking with a soft Irish brogue and an even tone, he gave a humane and at times anguished assessment of his job reviewing the horrors of sexual abuse and its cover up.

Msgr. Kennedy views his work as both a privilege and a burden. He also realizes how important the work is. “The topic of the clergy abuse crisis is front and center in our culture,” he noted. “Certainly, no theological topic or any other kind of heresy comes close.”

“For me it is at the heart, at the very core, and some have even suggested that the Church’s heart has been broken in this crisis.”

He said it has also taken its toll on many bishops.

“I have seen bishops who were once smiling pastors turned into morose, burdened figures,” he said. He described bishops who wept when reporting cases and bishops who felt absolutely alone — if not for Msgr. Kennedy and his office — in confronting the scandals.

“A newly elected, but to date not ordained, bishop told me that he found out that there are many cases of historical abuse cases to be tackled in the diocese. No one told him this before they asked him to accept the responsibility. Now it is too late to say no.”

No matter what pain or suffering he and others feel, however, “this is nothing compared to those who have borne this for years in silence,” he said of sexual abuse victims.

“What of the father, mother or siblings of the child who have to look at that child and live through this? What can they say? Everything has been taken from them. You believe me when I am telling you these things. Can you imagine what it might be like not to be believed by Church authorities? What would it be like to remain silent because a person did not have the courage to come forward and name their abuser?”

The priest said his office has now surpassed doctrine as the largest of the four offices that comprise the Congregation for the Doctrine of the Faith. Its responsibility for examining the cases of clergy sexual abuse was given by St. John Paul II to then-Cardinal Joseph Ratzinger, prefect for the congregation.

“When the pope entrusted the work to Cardinal Ratzinger’s office,” Msgr. Kennedy said, “he was instinctively aware of the impact these cases would have both on the credibility of the Church’s mission but more importantly on the faith life of a person who had been abused.”

Msgr. Kennedy said the mandate of his office goes beyond clergy sexual abuse. It also investigates crimes committed by clerics that involve the celebration of the sacraments, such as penance, and the handling or mishandling of sexual abuse allegations.

Msgr. Kennedy praised “Vos Estis Lux Mundi,” Pope Francis’ recent “motu proprio” that legislated by papal decree new rules governing sexual abuse and its cover up. It is “a welcome development” that now makes “the denunciation of sexual crimes an obligation,” he said, noting that the Church should not wait until the press uncovers abuse cases.

Regarding the press, the priest said that his office, while bound by rules of confidentiality as it seeks to investigate cases, shares with journalists a desire to speak about the truth for the common good.

“If we consider that the purpose of journalism is to provide citizens with the information they need to make the best possible decisions about their lives, their communities, their societies and their governments, then we can understand that the Church’s legal process and mission have the goal of offering its judges the best possible opportunity to be able to deliver justice in this particular aspect of its life,” he said.

Throughout the speech, which received a standing ovation from the assembled journalists, Msgr. Kennedy returned to the challenge of a constant flow of new cases into his office.

“We are privileged to have a unique bird’s-eye-view of the whole global situation,” he noted. He compared the work of his team to that of doctors working in an emergency room or trauma center.

“One cardinal said to me as he looked at the piles of disciplinary cases in front of him that we only deal with problems. In part he was right. I said to him that it is important to remember that we may receive problems but that our main task is to offer solutions,” Msgr. Kennedy said.

He expressed the hope that someday the services of his office will not be in such demand, “so that my priest colleagues can go back to what they were ordained to do. I wish that we will be able to work ourselves out of a job.”

“In all honesty, this work has changed me and all who work with me,” he confessed. “It has taken away another part of my innocence and has overshadowed me with a sense of sadness.”