VATICAN CITY (CNS) — Adam Piekarski, a homeless man from Lódz, Poland, never imagined that the sketches he would draw in his free time while waiting for the public showers near Bernini’s Colonnade would lead to the opportunity of a lifetime.

In November, the Vatican Philatelic and Numismatic Office announced that its 2021 set of commemorative Christmas stamps would feature images of the Magi and the Holy Family painted by Piekarski.

“Art is my passion even though I never studied it,” Piekarski told Catholic News Service Dec. 1 from a quaint studio just across the street from St. Peter’s Square.

“He went to a technical school in Poland and studied gardening in Lódz,” added Redemptorist Father Leszek Pys, known by many as Father Ruben, a fellow Pole who was among the first to realize Piekarski’s talent.

Piekarski left Poland six years ago and, like many migrants, made his way to Rome seeking a better life.

The Eternal City, he explained, is a place that remains in the heart of many Polish people as a source of inspiration for some of Poland’s greatest artistic icons, such as Henryk Sienkiewicz, author of “Quo Vadis,” and Henryk Siemiradzki, whose paintings often depicted life in ancient Rome. 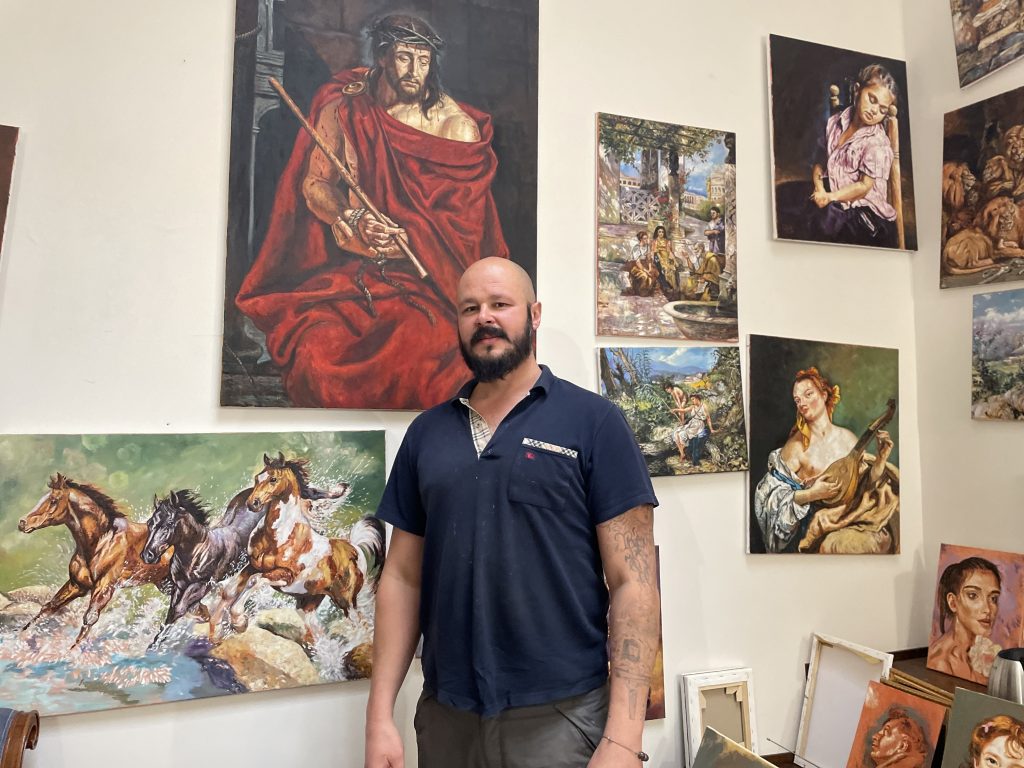 Adam Piekarski stands in front of his paintings in his studio at Palazzo Migliori, the Vatican’s homeless shelter, Dec. 1, 2021. Piekarski, a homeless man from Poland currently living in Rome, was commissioned to paint images for the Vatican’s 2021 Christmas stamps. (CNS photo/Junno Arocho Esteves)

However, upon his arrival, the harsh reality of finding work, coupled with a fondness for Italian wine, led Piekarski down the dark path of alcoholism that he continues to fight each day.

With Father Ruben serving as translator, Piekarski told CNS that his life began to change after meeting the Polish priest while waiting in line for the public showers for the poor at the Vatican.

Father Ruben told CNS that, at the time, he was trying to figure out a low-cost option for a painting of St. Clement Mary Hofbauer, co-founder of the Redemptorist congregation, to commemorate the 200th anniversary of his death.

Explaining his dilemma to Pallottine Sister Anna, a nun who volunteers helping the poor at the public showers, he was introduced to Piekarski, who would often spend his time sketching while waiting for his turn at the showers.

Father Ruben then provided Piekarski with paints, brushes and found a workspace in the crypt of the Church of Santa Maria in Monterone, where the burgeoning artist honed his artistic abilities.

His work drew the attention of Cardinal Konrad Krajewski, papal almoner, who then introduced Piekarski to Father Francesco Mazzitelli, then-deputy director of the Vatican Philatelic and Numismatic Office.

Father Ruben told CNS that when asked by Father Mazzitelli to design the 2021 Christmas stamps, Piekarski’s answer was an emphatic “no.” However, the Italian priest’s persistence finally moved the Polish artist to do it. 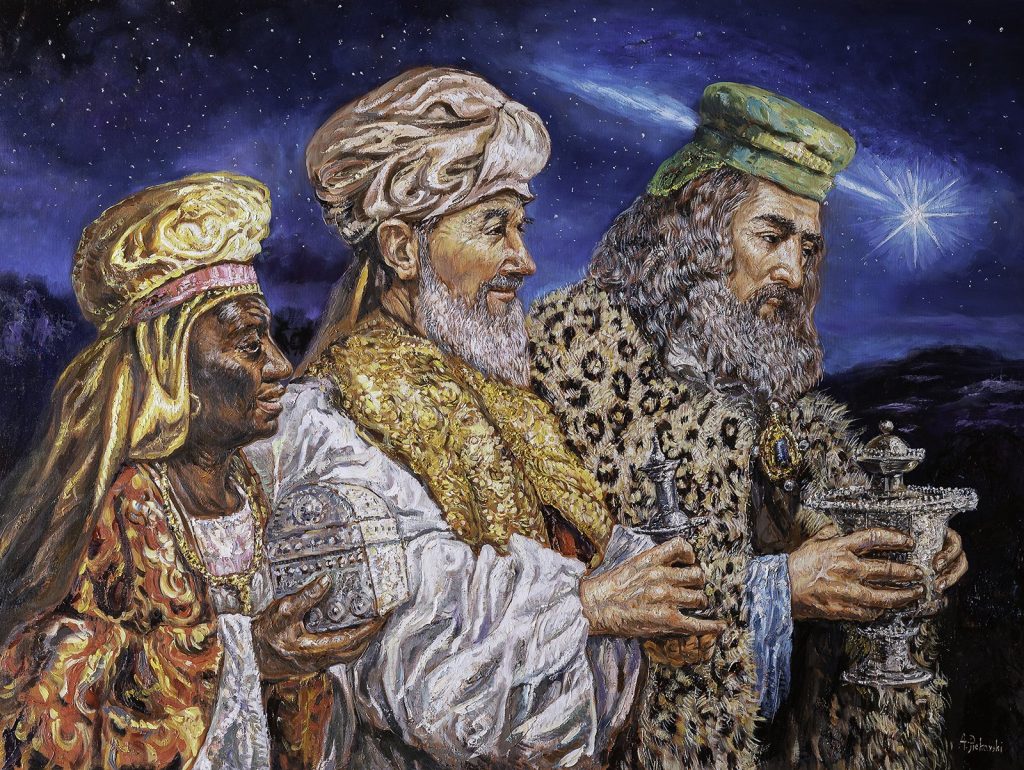 An image of the Magi is featured on one of the Vatican’s 2021 Christmas stamps. The images on the stamps were painted by Adam Piekarski, a homeless man from Poland currently living in Rome. (CNS illustration/courtesy Vatican Philatelic and Numismatic Office)

For the painting of the three Magi, Piekarski based their likeness on two friends who are also homeless; the third, he explained, was an original image meant to represent all homeless men and women.

Father Mazzitelli, who was appointed Nov. 27 as an official in the Office of the Papal Almoner, told CNS that Piekarski’s story was an example of Pope Francis’ call to “nurture tomorrow’s hope by healing today’s pain.”

“What has happened to Adam is a sign for everyone, because each one of us knows someone who has hidden gifts and talents,” Father Mazzitelli said. “The pope saying that we must nurture hope means he has given us a mission — to the Church and to each one of us — that we must build up hope in others.”

Father Ruben noted that installing showers for the homeless at the Vatican was more than just an act of charity for the poor during the 2015 Jubilee Year of Mercy, but a fundamental gesture that gave homeless men and women dignity.

“You can’t give back someone’s dignity by giving them a sandwich or a euro nor even by asking them their name. That is more of a philanthropic gesture that makes us feel good about ourselves,” the Polish priest said.

“But for that person, that sandwich, that euro doesn’t change anything,” he added. “But allowing them to clean themselves means giving them back their dignity.”

Piekarski credits the public showers for not only being the starting point of his journey as an artist, but the place where he decided to confront his battle against alcoholism.

“For someone who is suffering from alcoholism or who is slightly drunk,” Father Ruben recalled Piekarski telling him, “it is embarrassing to show up to clean themselves. But going there is the first step in getting out of alcoholism because, once they are at the showers, they want to change their lives.”

While he continues to paint from a small studio at Palazzo Migliori, the Vatican’s homeless shelter, Piekarski now works as an evening security guard at a property owned by the Knights of Malta, who became acquainted with him after he completed a portrait of the late Fra’ Giacomo dalla Torre, the grand knight of the order who died in 2020.

“Life is a mystery and God wanted it this way,” Piekarski told CNS. “What has happened is a dream and I still can’t believe it. God has a great sense of humor.”