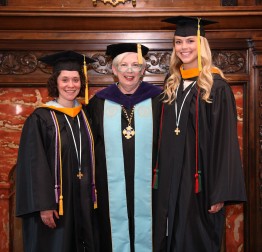 In last week’s column, I offered congratulations to our recent graduates from our high schools, colleges, and universities. In this week’s column, I am sharing with you the valedictory address of Anne Bulger, delivered at the commencement ceremony at Saint Mary’s College. I met Anne at the dinner following the Baccalaureate Mass at Saint Mary’s and received her valedictory address this past week. I thought it was excellent and decided to share it with you. It is very encouraging to hear reflections from our youth whose faith is an inspiration:

We have come to the time of our leave taking, that time in which we reflect on the many gifts we have received at Saint Mary’s and how we may use these gifts to affect change in the world. In John 15, Jesus tells us, “You did not choose me, but I chose you.” And He challenges us to bear fruit that will remain. Pope Benedict XVI offers this comment on Jesus’ words. “We must bring a fruit that will remain. All people want to leave a mark which lasts. But what remains? Money does not. Buildings do not, nor books. The only thing which remains forever is the human person created by God for eternity. The fruit which remains, then, is that which we have sowed in human souls. Only in this way will the earth be changed from a valley of tears to a garden of God.”

I want to begin by describing a moment when I saw these words of Benedict take flesh. After my sophomore year at Saint Mary’s, I had the opportunity to spend two years in Southern Indiana with a Christian missionary team. One afternoon in a run-down neighborhood of Evansville we met Arnold. He was only 64 years old, but his crooked hands told us of the debilitating arthritis that aged him beyond his years and left him confined to his electric wheelchair. We sat in the rusty, yellow folding chairs that cluttered the porch of his ramshackle house, and Arnold began to tell us how he experiences the world. “I thank the Lord for waking me up every morning,” he said. “I get to open my eyes and see His world. Then I get to feel His blood warming up my body. I get to splash some of His water on my face and sit down to eat some of His food.” After a slow breath he continued with a smile, “I’m the richest man in all of Evansville. I’m dirt poor, but everything I see is mine, because it belongs to my Father.” His money and his health were stripped away, but Arnold’s very person remained, and in his simple, grateful dignity, he was teaching me how to have peace in suffering. Arnold knew that God had chosen him. And he was producing fruit which will remain, in his own life and in mine.

We have received much in our time at Saint Mary’s that will equip us to leave a mark that lasts. We have learned to be articulate. My first semester here, I was given the assignment of writing a math paper. “Math? Paper?” I had never heard those words in the same sentence before, but now, x number of papers later, I can write about math. We have become confident. As a first-year student, I was horror-stricken when I realized that many of my classes would include a presentation. Yet in the end, some of my favorite moments at Saint Mary’s were the presentations I gave as part of my senior project. We have explored the world from many perspectives. In our history courses, we were not taught dates and names alone; we also studied the lives of the people who made the history, including those often left out of the history books.

Our minds have been formed here, and so too have our persons. When I returned to Saint Mary’s after my two-year leave, I was astonished to find that professors who had taught me a single class two years before still knew me by name and would stop to ask me how the transition was going. One professor said to me recently, “If the students only knew how we worry about them.” Our faculty have responded to us individually, opened their offices and homes to us and challenged us to grow. From them, we have learned compassion and generosity. We have been formed too by our fellow students, who have given us friendship, and by our parents, who have labored for us, guided us and set us free to take our place in the world. We are the fruit of their lives, fruit that will last.

How will we respond? Let us go and produce lasting fruit. Let us break through the isolation of those who live and die alone; let us honor and protect the sanctity of life; let us raise children who will also change the world; let us use our gifts of intelligence and this extraordinary education to renew the working world; let us be women of compassion, forgiveness, and strength. As we go forth from this place, let us raise our eyes to meet each human face with love and dignity, that through it all, we may transform the weeping valleys of the world into gardens of God.