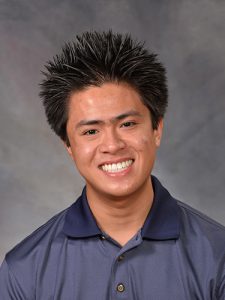 Brendan Gonzales from Mishawaka was named valedictorian of Saint Joseph High School in South Bend, though this was not the only accomplishment he achieved throughout his high school career.

“I feel overwhelmingly grateful,” he said. “Looking back on these four years, I can genuinely say that I wouldn’t be half the person I am today without the support of the Saint Joe family.”

“As soon as he could walk, Brendan was always on the move, and that same drive has served him well with all of his activities,” said his mother, Portia. “He was a happy child then, and he is an upbeat young adult now, always with a smile on his face and seeming to wake up on the right side of the bed every day.”

Brendan is a parishioner at St. Pius X Parish in Granger and went to grade school there. “The faith has given me strength,” he said. “It’s been a tenuous few years, and when classes went virtual, I wasn’t sure if I was going to make it. Having the Catholic faith to cling to gave me the resolve to persevere through quarantine, knowing that brighter days are ahead.”

The connection between his faith and academics is something Saint Joseph High School has instilled in him. “Teachers and peers alike have shown me that there is glory in education,” he explained. “I’ve come to see that it is the duty of a responsible Catholic to learn about and understand the world that God created in order to become better stewards of His creation.” The school has also provided Brendan with a confident sense of who God has created him to be, he said.

Brendan’s tendency toward service has not gone unnoticed. “We are in awe of the young man that he has become and are excited for him to further his education in order to serve others in the future,” said his mother, speaking for both herself and Brendan’s father, Luisito. Brendan has volunteered at the Food Bank of Northern Indiana, as well as at St. Joseph Regional Medical Center. He plans to study pre-med at the University of Notre Dame.

Though his eyes are set on his future academic endeavors, his heart is traveling through the bittersweet moments of his final days of high school.

“I’m already feeling a bit nostalgic, imagining the impossible – that I won’t be walking these halls next year. Saint Joe has been my home away from home, and my classmates and teachers have been one big, great, loving family,” he said.

“I love Saint Joe and will cherish every moment I was lucky enough to have here.”