Having their voices heard was a common motivation cited by attendees of the Episcopal Region 7  V Encuentro gathering June 8-10 at the University of Notre Dame, South Bend. The gathering was attended by representatives from dioceses in Illinois, Wisconsin and Indiana, and several bishops were present as well.

The process of the fifth national Encuentro began at the grassroots level, with discussions in parishes about the needs and resources of the Hispanic community in regard to practicing their faith, evangelization and Church leadership. Representatives from those meetings, which took place in the fall, took their priorities and determined areas of focus first to a diocesan-level Encuentro gathering and now to the regional level. The discussions are building up to the formation of a national document of recommendations for the U.S. Conference of Catholic Bishops regarding vocations, evangelization, family ministries, young adults, immigration status, formation of faith, education and more.

Leadership from 13 of the 16 parishes in the three-state area brainstormed the opportunities and challenges within each ministerial and pastoral area of focus, with the goal of prioritizing them before the national gathering in September. Frederick Everett, Secretary for Evangelization and Discipleship for the Diocese of Fort Wayne-South Bend, said six or seven of the leaders from each diocese will attend the national gathering. 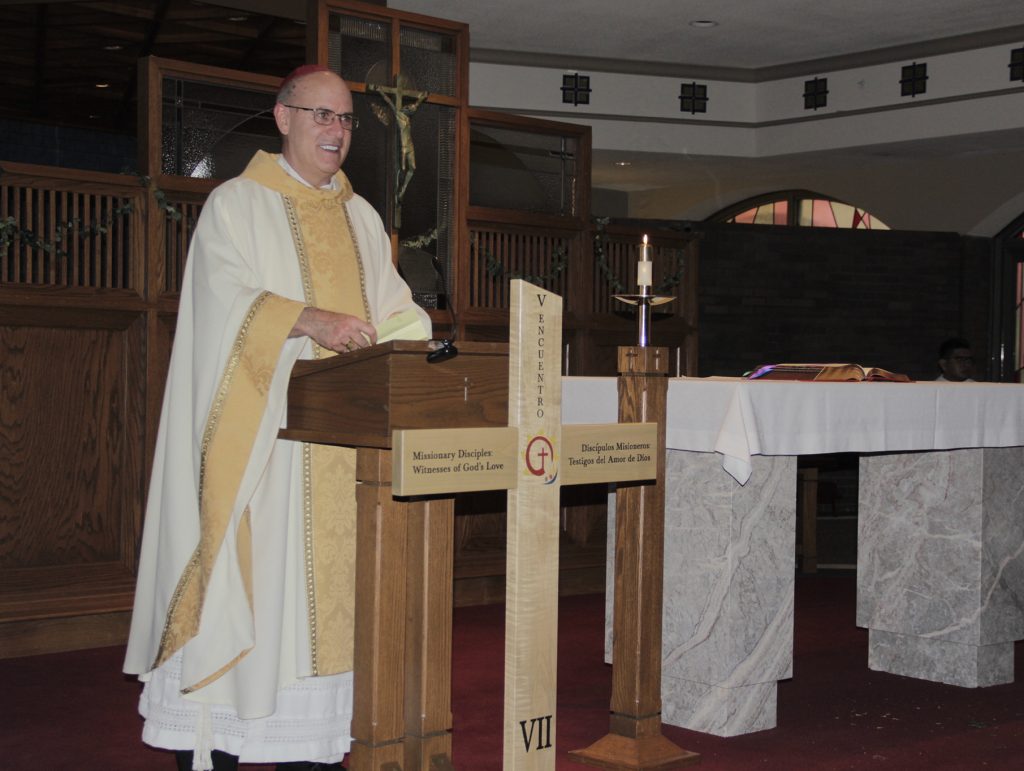 Bishop Kevin C. Rhoades speaks to representatives of 13 Indiana, Illinois and Wisconsin dioceses during the opening Mass of the V Encuentro Region 7 gathering at the University of Notre Dame June 8. — Jodi Marlin

The Most Reverend Kevin C. Rhoades, Bishop of Fort Wayne-South Bend, was the celebrant for the gathering’s opening liturgy Friday evening. At the Mass that set the tone for the weekend of discussion, worship and reflection, he credited providence for its opening day having fallen on the solemnity of the Sacred Heart of Jesus.

“The Sacred Heart symbolizes the love of God, His infinite love revealed in the pierced heart of His Son; a love that conquers sin and transcends death,” he began, in his homily. “We are called to give witness to this love. The theme of V Encuentro, as you know, is ‘Missionary Disciples: Witnesses to the love of God.’ On this feast day we contemplate that love, the love of God revealed in His Son Jesus, who loved us to the extreme, to the end; and after contemplating and experiencing this love, to give testimony and be witnesses to it.

“In this V Encuentro we reflect on our vocation as missionary disciples to be witnesses to the love of God, to be like St. Margaret Mary Alacoque, who received the revelation of the Sacred Heart — disciples of the Sacred Heart of Jesus. I hope that this Encuentro inspires and helps us to spread the love Christ throughout our region, our country and our world. This is our mission, the mission of the Church.” 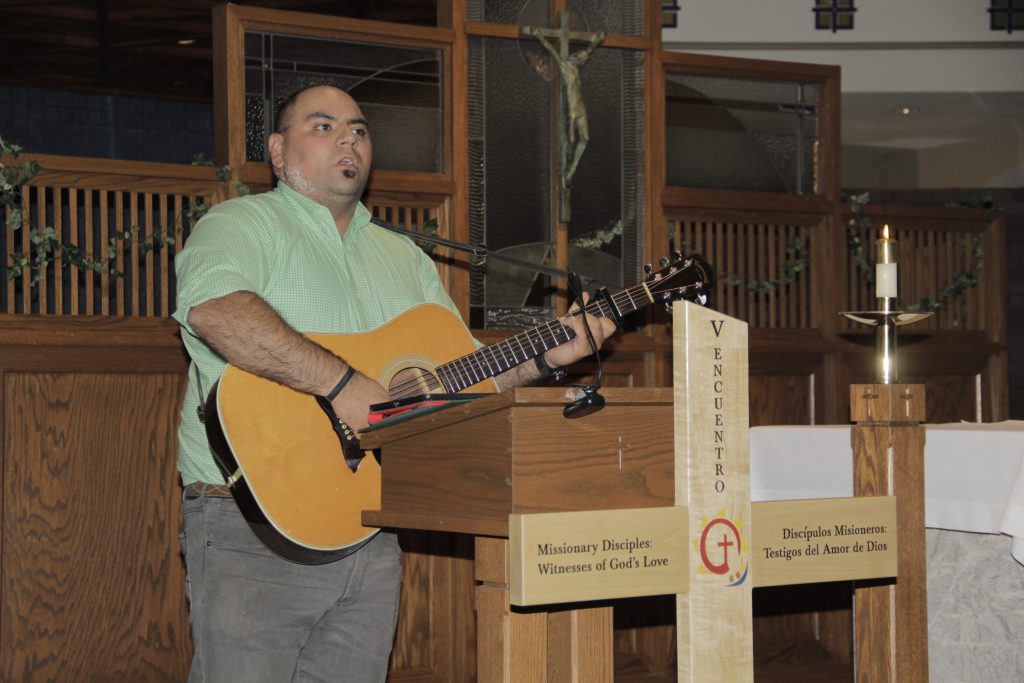 A parishioner of St. Adalbert Church, South Bend, provides musical accompaniment for the responsorial psalm during the opening Mass of the V Encuentro Region 7 gathering at the University of Notre Dame June 8.
— Jodi Marlin

Ernesto Benetiz and Yareli Nopal of St. John the Evangelist Parish in Goshen shared their thoughts about the Encuentro. Benetiz said he felt the process gave “hope for everyone. Most people don’t feel like they can talk. This is an opportunity to raise our voice,” he said. “We are the voice for everyone who is not close to the Catholic Church. It is also a great opportunity to feel we are all together in community in the United States — we are one Church.”

Nopal said she hopes the outcome will be “Everyone getting united — especially the Anglo and Hispanic communities. ”There is still much work to be done, she added, as “sometimes there is even a barrier between even the bilingual and Spanish-speaking-only communities in parishes.”

Benetiz said he believes the Encuentro process can help the diocese as a whole, because the participants are discovering “weaknesses and strengths, and what we need to influence spiritual growth.”

“Also, when we share our thoughts and feelings we make our voices count,” he added. “It helps the diocese grow more and lets the bishop know we are open and willing to work to make our faith, our diocese and our Church grow.”

Ruiz chose to participate primarily in the small-group discussions about family ministry. He said he hopes one of the end results of the Encuentro process will be to promote unity among immigrants. “We are in the middle of two cultures, because we can understand the Anglo culture and they (immigrants) can understand us. We are the same Church — one God, and one nation under God.”

Mirna Rodriguez from St. Patrick Parish in Ligonier said she learned at the regional gathering about the different aspects of Church life and the needs that people in different churches have. She felt the biggest concerns voiced were the need for support for catechists and the problem of keeping young people in the Church. Rodriguez said she realized that different churches share these and other issues, and was encouraged that at the regional gathering participants shared several different ideas to resolve them. 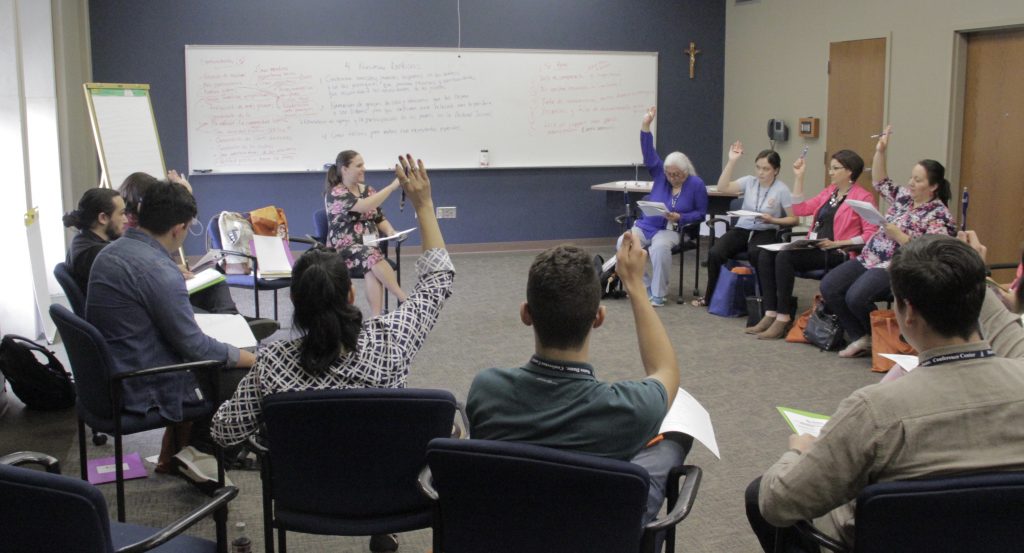 A breakout session dealing with issues pertaining to Hispanic youth meets during the V Encuentro Region 7 gathering at the University of Notre Dame on June 9. — Jodi Marlin

Attendees met in small groups to discuss specific issues and priorities. After lunch in the Morris Inn on Saturday, they then discussed jointly the areas of positive growth in Hispanic ministry within their parishes, as well as problems and opportunities within each area of focus.

Regarding vocations, for example, they said encouragement was needed for all their parishioners to spend time in prayer for vocations and promote vocations to young adults, and for the Church to provide bilingual priests. Opportunities mentioned included a rising tide of new Hispanic leadership to help individuals discern vocations, and the teaching of seminarians about other cultures; problems included a lack of general and Spanish-language information about vocations and lack of support within Hispanic families for vocations.

During a discussion about evangelization, the suggestions included developing new programs for young adults and children, bringing in both ecclesial and lay leadership in order to help parishes determine how to encourage Hispanic parishioners to evangelize. Among the obstacles noted was that some Hispanics see the parish as a government-type entity, rather than a place to increase their faith. Some also do not have an immigration status that would allow them to evangelize at will — for example, in prisons, which require identification to enter.

Alicia Carrillo, also from St. Patrick Parish in Ligonier, gave a moving personal testimony about how the Holy Spirit worked through her as she stepped out of her comfort zone and began going door to door to share God’s Word and invite Hispanic residents of her community to become involved with the Church and attend Mass. She learned, she said, that “This is not the time to be inside, but rather to be outside — there are millions of people waiting for help.”

She said when people are addicts, for example, others tend to be critical — but that’s not what the addict needs. He or she needs someone to be close to them, to accompany them. She cited a quote from Pope Francis about being willing to take on the odor of the sheep and explained that it meant being willing to give a person a hug even if they’re dirty — in other words, meeting them where they are. 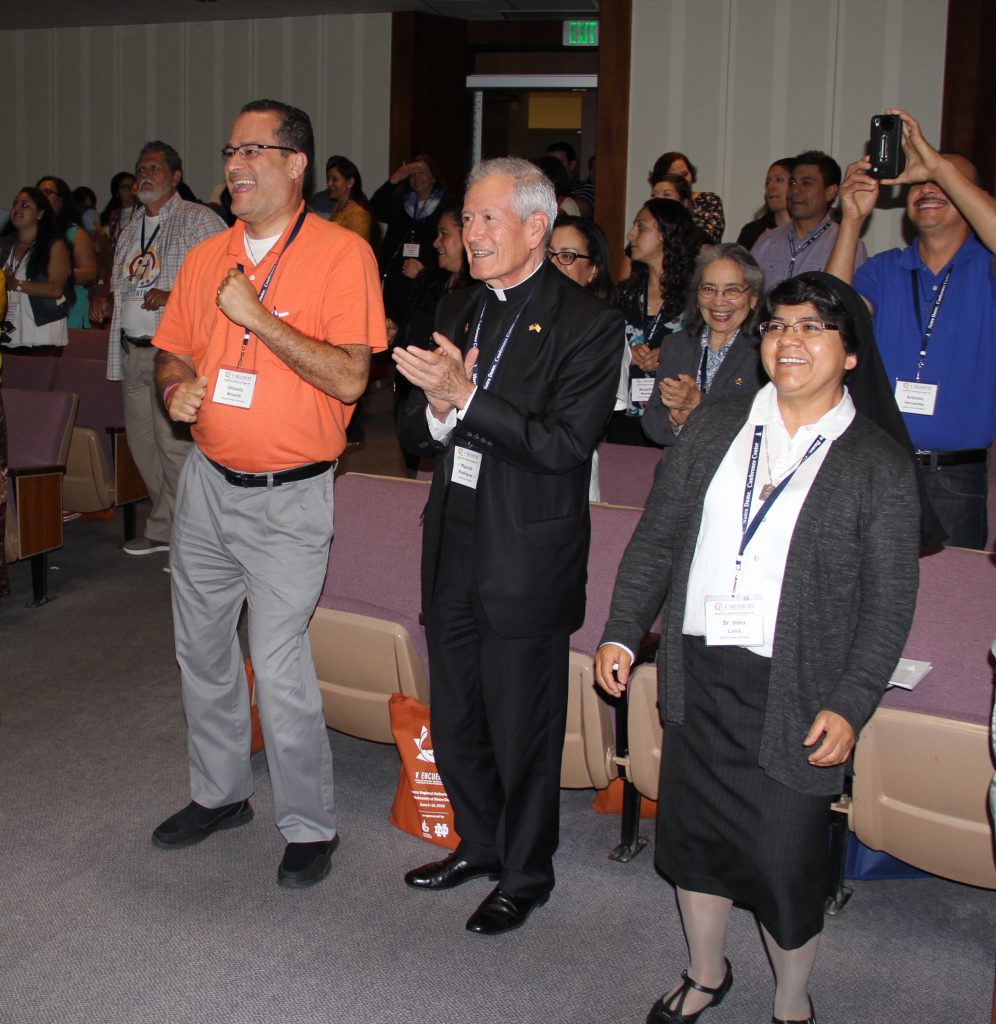 Orlando Miranda, left, of the Diocese of Fort Wayne-South Bend, and other participants enjoy a lighthearted moment during a plenary session of diocesan representatives to the V Encuentro Region 7 gathering at the University of Notre Dame that took place June 8-10. — Jodi Marlin

Everett said what has come out of V Encuentro so far is an awareness of the need for more formation and more partnership between the clergy and the lay people. He said as the Hispanic population continues to grow in the U.S. it is a large part of the Church, and there are several different issues that must be addressed.

He said young people are questioning where they stand in the Church, and that the Church can no longer justify its action or inaction by saying ‘this is just what we do’ — and relying on those who leave as teens or young adults to come back when they have children.

“That’s shown to be false,” Everett said. “If they are not experiencing Christ first and foremost the traditions and things they see as obligations will be seen as irrelevant.”

As to how the V Encuentro process is specifically going to help the Diocese of Fort Wayne-South Bend, Everett said, “Now we can help keep the focus on what needs to be done and to motivate people on all levels. This is not a time to be apathetic or even discouraged — it’s a time to take stock of where we are and make changes.”

Rodriguez said she felt like through this process, “Even the pope is connected to our voice and our faces.” 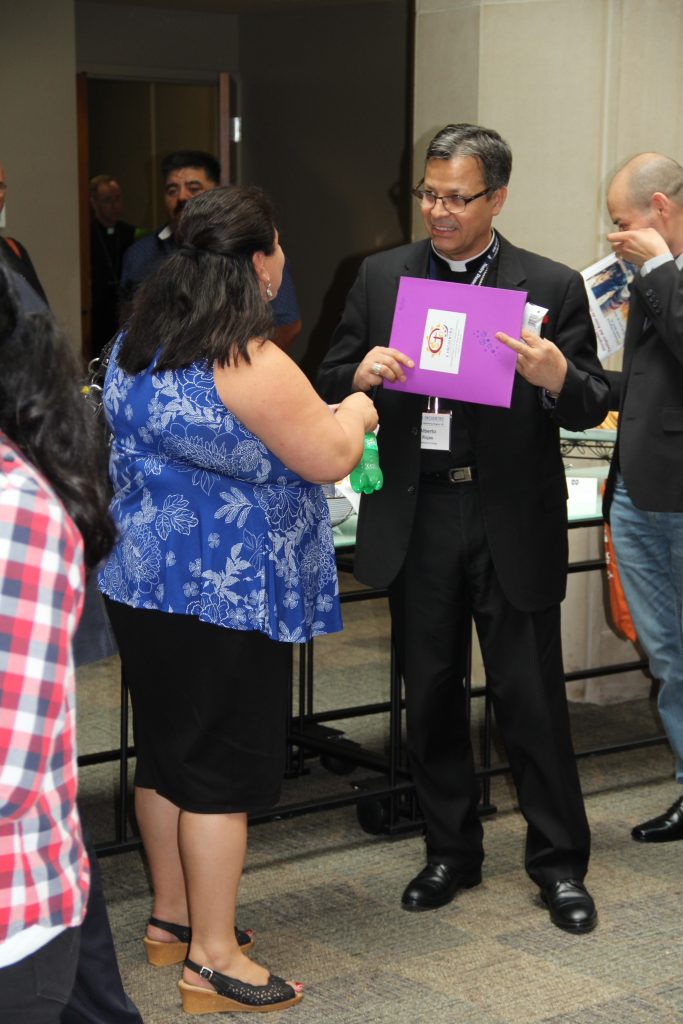 Msgr. Alberto Rojas of the Archdiocese of Chicago, episcopal leader for Region 7, speaks with a participant between sessions on June 9. — Jodi Marlin