The children of Lori Massa were getting older. So in 2013, the homeschooling Mom began to look for another arena in which she could constructively contribute; maybe either a career or volunteer work for her parish of St. Vincent de Paul, Elkhart.

“I wanted to work for God in some way,” she said.

Pastor Father Glenn Kohrman asked if Massa would take a seat on the parish council. But the role didn’t feel like it quite fit, she recalled.

Moved by the book to discern the gifts she had been given for the purpose of evangelization, Massa attended a Called and Gifted workshop in Troy, Michigan. The workshops help individuals identify and experiment with what St. Thomas Aquinas called “gratuitous grace” —natural talents, gifts and charisms given by the Holy Spirit to Christians for the good of the Church. There are three parts to the Called and Gifted Program: a learning workshop, a one-on-one interview to confirm that a person’s charisms have been correctly identified, and deeper discernment of how to live out that charism.

“Charisms are gifts from God that we all receive when we’re baptized,” Massa said. “We’re strengthened at confirmation by all the gifts we receive from the Holy Spirit that are for the benefit of other people.”

In the spring of 2014, the director of RCIA at St. Vincent de Paul stepped away from the position. She approached Massa to take the helm.

“I knew I should say no. I had holes in my qualifications for the job, when it came to faith formation and a college education. But one thing I knew: that I had charisms crucial to bringing new Catholics into the faith.”

One of the areas in which Massa scored highly is called “helps.” It means that she has been given the necessary gifts and motivation to be of assistance to those who are in positions of leadership. She also has the charisms of learning and encouragement.

“I could see how the Lord was encouraging me as well,” she said. She accepted the position. 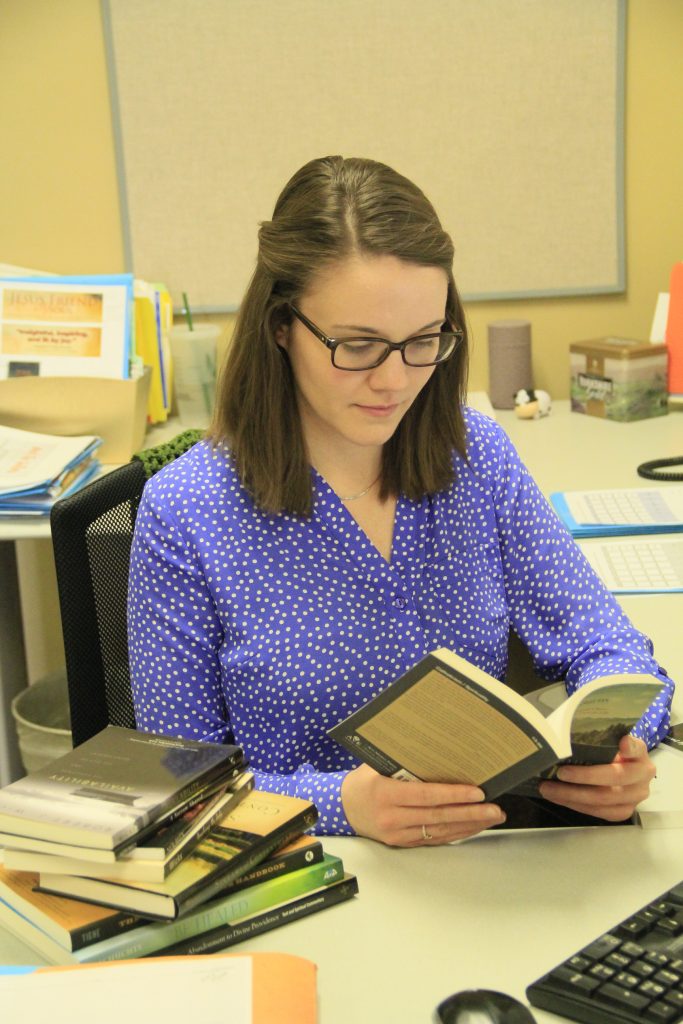 Jennifer Barton
Elizabeth Wilkes had her career choice reinforced by discerning through the Called and Gifted Program that she has the charisms of knowledge and helps. Both of come into play in her work at Ave Maria Press, South Bend.

Fifty miles away, a second parish named St. Vincent de Paul had also become interested in Weddell’s book and the value of helping people determine to what task or mission God might be calling them. Since 2016, St. Vincent de Paul Parish in Fort Wayne has offered 12 Called and Gifted Workshops.

“Father Dan (Scheidt) likes to say that this is not a volunteer recruitment program for the parish, and I think that’s what really struck us. It’s a new way at looking at our gifts, our charisms as individuals, and how do we share those with our family, with our friends, with our co-workers … how do I approach life?” said pastoral associate and Called and Gifted core team member Dorothy Schuerman.

“We’ve had people that have changed professions, who said, ‘This convinced me; that here are my gifts, and maybe I need to be looking in other areas.’ And (they) found places of employment that they really love. They just found their niche.”

Called and Gifted is a way to live one’s faith out in the world, Schuerman reiterated. “You’re doing things that you love to do and you’re doing it for the glory of God. That’s the tenet of this, of these charisms. They are meant to be given away. They’re not meant to be kept.”

Sean Allen, director of young adult and campus ministry for the diocese, began building up charism identification and development several years ago among the young adult community in South Bend. Another disciple whose trajectory was altered by the Called and Gifted Program, Allen was an electrical engineer who discerned he had the gifts for young adult ministry.

John Sikorski, Associate Secretary for Evangelization and Discipleship, points out that charisms “are different from the theological virtues, which are given for our sanctification.” Those who don’t realize what charisms they have are not fully activating their life of discipleship, of evangelizing in the world – something Weddell seemed to discover.

While some charisms can be helpful in building up a parish, charisms can just as easily be best exercised outside of the parish setting for the greater Church, among God’s children in the world or in one’s personal life – and still serve to build up the Kingdom of God.

Conversely, Sikorski points out, “there’s actually a certain kind of freedom you have to say, for example, if someone asks you to help out in a particular ministry that you don’t feel is a good fit for you, ‘Well, I don’t really have that charism — you should probably look to someone else.’”

The Secretariat for Evangelization is currently building on the charism identification and development started within the young adult community and preparing to expand it into two South Bend parishes. The first co-sponsored Called and Gift workshop will take place Feb. 7-8 at St. Therese, Little Flower for active Catholics who want to “go deeper and expand their life of discipleship,” said Sikorski. St. Vincent de Paul, Fort Wayne, offered a workshop on Feb. 1, and parishes in Elkhart, Huntington, Warsaw and North Manchester are also looking into offering the Called and Gifted program.