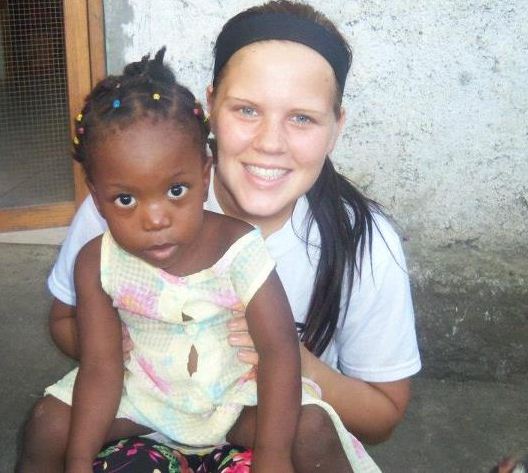 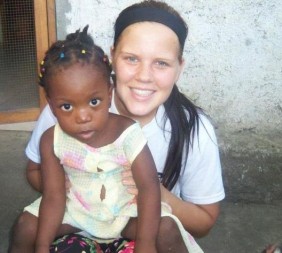 On her last visit to Haiti, USF junior Rachel Bornhorst holds three-year-old Snide Christie Vilmar. Her parents died, her grandmother tried to care for Christie but did not have the means and her aunt did not want to care for her. An uncle took her away and gave Christie to Father Andre’s orphanage.

FORT WAYNE — The headlines read, “Deadly Hurricane Katrina strikes Haiti, Gulf region” in 2005 and “Port-au-Prince, capital, largest city, struck by catastrophic earthquake” in 2010. The aftershock of all that devastation is still being felt by tens of thousands of citizens of that poor Caribbean country.

One particular location called Robillard, Haiti, located in a rural area about a six-hour drive north of Port-au-Prince, holds a special place in the hearts of many University of Saint Francis students in Fort Wayne and their faculty advisor, Dr. Amy Obringer. That’s because it’s the rented home of Our Lady of Perpetual Help Orphanage and its beloved founder, Father Andre Sylvestre.

The small orphanage is housed in a modest ranch-style home with 27 children, three “moms” and a male guardian all living under one roof. The children sleep in double bunk beds and each bedroom is at full capacity. There’s no room for any more orphans. (The moms do not cook or clean, but are hired by Father Andre to give love and compassion, and sit with the children).

“We feel ‘called’ to help this orphanage,” said Obringer. Two students have traveled there twice at their own expense, given a number of presentations and held fundraisers, she related. “For the past two years, we’ve been Father Andre’s most consistent and main supporter.”

Currently, a fall campaign is underway to raise $50,000 by Feb. 1, 2013, for a new orphanage on 15 acres of land owned by Father Andre to house 40 children. It’s the first phase of the diocesan priest’s dream for a long-term orphanage complex providing a home for more than 100 orphans along with a vocational school, library, health clinic, chapel, adult literacy center, community room and a home for a congregation of sisters who eventually would manage the orphanage after Father Andre is gone.

The new orphanage would be a place “where the orphans can have the privilege to feel loved, to have access to education and healthcare, to hear the Good News of the Gospel, to learn how to shape their own destiny,” said Father Andre. “In short, I would like to give them a safe place where they can develop all the dimensions of their lives,” he said. “It’s the only family these kids will ever know,” added Obringer. “None of the children can ever be adopted.”

“Pre-school teachers are hired to teach the children in the garage area of the home,” said Rachael Bornhorst, a junior at USF. “The older children are driven to and from an elementary school less than a mile away.”

Father Andre now pays $5,000 a year for rent. The contract ends this coming February and he is negotiating renting for another six months hoping the new residential unit will be completed by June or July. Architectural plans and cost estimations have been completed. Construction to withstand earthquake and hurricane forces will be supervised by an architect with experience building in Haiti.

“Realistically, we do not anticipate making our goal by Feb. 1 by our own efforts,” said Obringer, estimating the campaign has raised about $37,000 to date. “We need the help of foundations, corporations and individuals who believe in our mission and are willing to provide ideas, construction items and financial support,” she related. Anyone interested in more information, attending a presentation, getting involved, making an in-kind donation or even traveling to Haiti in March or May next year, is asked to contact Obringer at [email protected] or (260) 399-7700, ext. 8210. “Monetary donations can be accepted at any time with the money simply wired to Haiti for the orphanage project,” said Obringer. And if readers would like to follow activities they can “like” Formula for Life on Facebook.

Origins of Formula for Life

But let’s start at the beginning with Cortney Shepard, a biology major who returned from a medical mission trip to the Dominican Republic in 2007. While there she cared for a young mother whose infant was starving because the mother could only afford to feed the child two crackers a day. Upon her return, Shepard told Obringer she was struggling to resume her “comfortable life with everything she needs” knowing there are babies starving. Obringer asked, “Why don’t you do something about it?” Shepard founded what she called “Formula for Life” at USF — a 5K walk/run and silent auction to raise funds.

“Since it’s been difficult to find contacts in the Dominican and with the awareness of Haiti and Father Andre, Formula for Life now dedicates nearly all of its fundraising efforts to Our Lady of Perpetual Help Orphanage,” Obringer explained. This year’s event drew 400 registrations and raised more than $11,000.

“We arrived with suitcases filled with canned foods, powdered milk, vitamins and infant formula,” Obringer said, “and money for drilling a well for clean water.” The student-led project has become the orphanage’s financial mainstay in terms of nutritional funds. Shepard, a 2009 USF graduate and currently enrolled in her second year as a Chicago osteopathic medicine student, returns annually to start the 5K walk/run. The next Formula for Life event will be April 14, 2013.

Formula for Life will continue to provide funding for nutritional support for the orphanage until it reaches its goal of self-sufficiency. This fall’s campaign is to raise money strictly for the new orphanage.

Obringer said, “To give you an idea of how amazing Father Andre is, he probably is in his middle 60’s, he has his own parish, oversees an elementary school with more than 500 children, has his own counseling practice because he very much wants to make healthier Haitian families and he does a lot of marital counseling — all this while in the back of his mind he felt he was being called to start an orphanage.”

That “calling” came when four-year-old orphan, Deluxon, came to him asking for food about two or three weeks after the 2010 earthquake. He led the priest behind a dumpster to where he and his two sisters were living beneath a piece of tin — a two-year old with an HIV infection and an infant, who subsequently died of malnutrition. At that moment Father Andre “got the message” that it was time to start his orphanage, Obringer related.

Deluxon became the first of Father Andre’s orphans. (His surviving sister is in another orphanage because of her medical needs). Each child has a survival story similar to Deluxon’s — children who have lost both parents to disease, starvation, natural disasters and abandonment, or they have escaped from a “restavek” (childhood slavery) situation. For every child rescued, more await salvation. “And now he has to turn kids away,” Obringer stressed.

“All the kids are extremely cute and it melts your heart when you see them,” said Bornhorst. “I would love to spend more than 10 days with them, maybe on the medical side where I could help provide for their medical needs.”

“It’s more than building a new orphanage for these kids,” added Obringer. “It’s an opportunity to just truly give. They can’t give us anything in return other than their affection, saying ‘thank you’ and praying for us. And even though we’re providing this structure for them, they’re changing us! We’re growing in compassion and the courage to try and get them help as well as the skills we’re learning about fundraising,” she concluded.