WASHINGTON (CNS) — While confusion has arisen in recent days in the media over “the moral permissibility” of using the COVID-19 vaccines just announced by Pfizer Inc. and Moderna, it is not “immoral to be vaccinated with them,” the chairmen of the U.S. bishops’ doctrine and pro-life committees said Nov. 23.

Bishop Kevin C. Rhoades of Fort Wayne-South Bend, Indiana, chairman of the U.S. Conference of Catholic Bishops’ Committee on Doctrine, and Archbishop Joseph F. Naumann of Kansas City, Kansas, chairman of the USCCB Committee on Pro-Life Activities, addressed the issue in a memo to their brother bishops. A copy of the memo was obtained by Catholic News Service Nov. 24.

“Neither the Pfizer nor the Moderna vaccine involved the use of cell lines that originated in fetal tissue taken from the body of an aborted baby at any level of design, development or production,” the two prelates said. “They are not completely free from any connection to abortion, however, as both Pfizer and Moderna made use of a tainted cell line for one of the confirmatory lab tests of their products.

“There is thus a connection, but it is relatively remote,” they continued. “Some are asserting that if a vaccine is connected in any way with tainted cell lines, then it is immoral to be vaccinated with them. This is an inaccurate portrayal of Catholic moral teaching.” 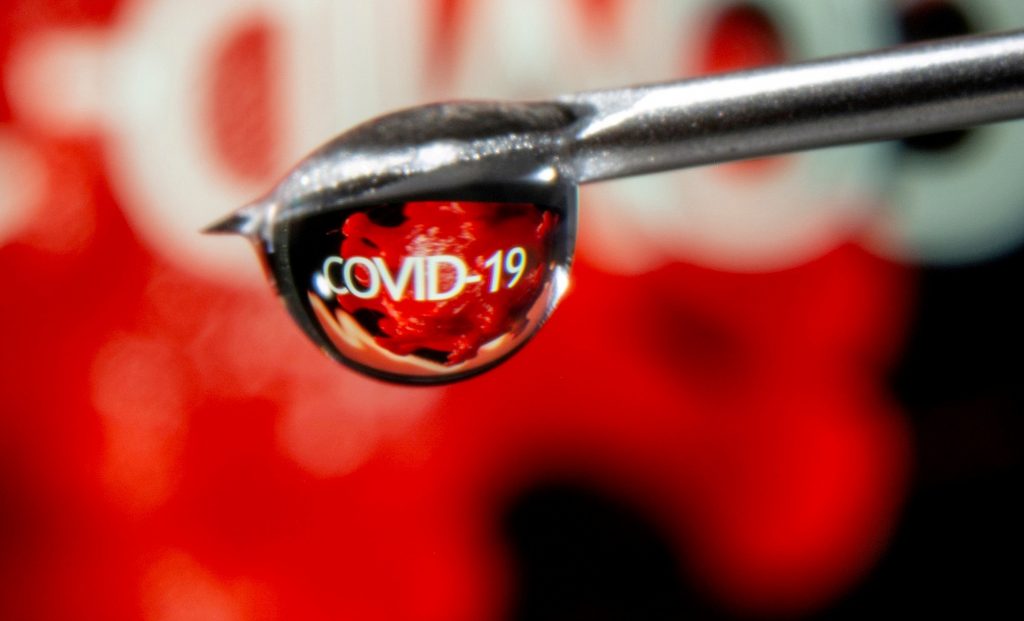 The word “COVID-19” is reflected in a vaccine drop that dangles from a syringe needle in this illustration photo Nov. 9, 2020. (CNS photo/Dado Ruvic, Reuters)

Bishop Rhoades and Archbishop Naumann cited three Vatican documents that “treat the question of tainted vaccines”: the 2005 study by the Pontifical Academy for Life, “Moral Reflections on Vaccines Prepared from Cells Derived From Aborted Human Fetuses”; paragraphs nos. 34-35 in the 2008 “Instruction on Certain Bioethical Questions” (“Dignitatis Personae”) by the Congregation for the Doctrine of the Faith; and the 2017 “Note on Italian Vaccine Issue,” by the Pontifical Academy for Life.

“These documents all point to the immorality of using tissue taken from an aborted child for creating cell lines,” they explained. “They also make distinctions in terms of the moral responsibility of the various actors involved, from those involved in designing and producing a vaccine to those receiving the vaccine.

“Most importantly,” they added, “they all make it clear that, at the level of the recipient, it is morally permissible to accept vaccination when there are no alternatives and there is a serious risk to health.”

In a Nov. 21 statement, the president and CEO of the Catholic Health Association, Mercy Sister Mary Haddad said CHA ethicists, “in collaboration with other Catholic bioethicists,” used the guidelines released by the Vatican’s Pontifical Academy for Life in 2005 and 2017 on the origin of vaccines and “find nothing morally prohibitive with the vaccines developed by Pfizer and BioNTech (Pfizer’s German partner) and Moderna.”

She also said CHA “believes it is essential that any approved COVID-19 vaccine be distributed in a coordinated and equitable manner,” because COVID-19 “has had a disproportionate impact on vulnerable populations, such as the elderly, low-income communities, persons with preexisting health conditions, and racial and ethnic minorities.”

CHA encouraged Catholic health organizations “to distribute the vaccines developed by these companies.”

Bishop Rhoades and Archbishop Naumann did not point to any specific media outlets claiming the moral unsuitability of the vaccines. However, after Pfizer and Moderna announced their vaccines, at least two Catholic bishops warned against using them, saying they are morally tainted.

On Nov. 11, Pfizer and BioNTech announced that results of a large ongoing study show its vaccine is 95% effective; the vaccine is already being manufactured and has been since October. Five days later, Moderna said preliminary data from its phase three trial shows its coronavirus vaccine is 94.5% effective in preventing COVID-19.

Pfizer and Moderna are applying to the U.S. Food and Drug Administration for emergency approval of the vaccines, which would quickly pave the way for distribution of the vaccines. The FDA is to meet Dec. 10.

On Nov. 16, Bishop Joseph E. Strickland of Tyler, Texas, tweeted the Moderna vaccine “is not morally produced. Unborn children died in abortions and their bodies were used as ‘laboratory specimens.’ I urge all who believe in the sanctity of life to reject a vaccine which has been produced immorally.”

In a Nov. 18 video posted on his diocesan website and subsequent interviews with local media, Bishop Joseph V. Brennan of Fresno, California, weighed in on the vaccines, saying: “We all want health for ourselves and for others. We want to promote that also … but never at the expense of the life of another.”

In May, the Trump administration launched Operation Warp Speed, the moniker of its initiative to deliver COVID-19 vaccines to Americans as quickly as possible. The program has funded the manufacturing of six promising vaccine candidates, two of which are the ones announced by Moderna and Pfizer.

As soon as the FDA approves their vaccines for distribution, Operation Warp Speed hopes to distribute 300 million doses around the country by January. Because Moderna and Pfizer’s vaccines involve two shots per person, this would be enough to immunize 150 million Americans.

Other COVID-19 vaccines on the horizon include one being developed by AstraZeneca with Oxford University.

Like Bishop Rhoades and Archbishop Naumann, John Brehany, director of institutional relations at the National Catholic Bioethics Center in Philadelphia, said a recent interview on the “Current News” show on NET TV, the cable channel of the Diocese of Brooklyn, New York, that the Moderna and Pfizer vaccines were not themselves produced using cell lines derived from aborted fetal tissue.

He expressed “great respect for Bishop Strickland,” calling him “a bold courageous witness to the faith,” who is saying “some true things about issues that go back decades in pharmaceutical research and development,” in the production of vaccines for measles, mumps, rubella, chicken pox and other diseases.

But in the case of the Moderna and Pfizer vaccines, Brehany emphasized, any connection to aborted fetus cell lines is extremely remote.

For Dr. Robert Tiballi, an infectious disease specialist in Chicago and a member of the Catholic Medical Association, this indirect use raises an ethical issue for Catholics.

“The fetal cell lines were not directly used in the Moderna vaccine, but they were indirectly used several steps away from the actual development of the vaccine,” he told “Currents News” in a separate interview.

Any such cell lines were derived from tissue samples taken from fetuses aborted in the 1960s and 1970s and have been grown in laboratories all over the world since then.

In its 2005 study, the Pontifical Academy for Life said Catholics have a responsibility to push for the creation of morally just, alternative vaccines, but it also said they should not sacrifice the common good of public health because there is no substitute.

“Catholics can have confidence if there is a great need and there are no alternatives, they are not forbidden from using these new vaccines,” Brehany told “Current News,” but he added: “There is much the Church calls us to do in seeking out alternatives and advocating for alternatives.”

Catholics “need to provide the urgency and advocacy” to get pharmaceutical companies to understand there are alternatives to using fetal cell lines to develop vaccines, “so they can see the need for this,” he added, echoing the Pontifical Academy for Life.

A case in point is the decision by Sanofi Pasteur to no longer use an aborted fetal cell line in producing its polio vaccines, a move recently approved by the FDA.

Sanofi is one of the companies currently developing a COVID-19 vaccine by utilizing “cell lines not connected to unethical procedures and methods.” Inovio Pharmaceuticals and the John Paul II Medical Research Institute are other such companies.