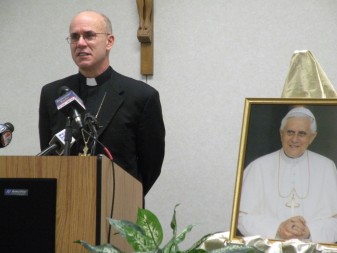 Bishop Kevin C. Rhoades speaks at a press conference at the Archbishop Noll Catholic Center in Fort Wayne on Feb. 11 at 11:30 a.m. in response to the news of the resignation of Pope Benedict XVI.

FORT WAYNE, WASHINGTON (CNS) — U.S. Catholic Church leaders who awoke to the news of Pope Benedict XVI’s announcement that he will retire at the end of February said they were surprised by the news but admired the pontiff’s courage and humility for making the decision.

In a press conference held  in the Archbishop Noll Catholic Center in Fort Wayne, Bishop Kevin C. Rhoades read his statement on the pope’s resignation to the local media saying, “Amid the sadness of today’s news, I am also filled with gratitude for the faithful and fruitful ministry of our beloved Holy Father.”

During the conference Bishop Rhoades, who received information on the pope via text, invited all the faithful to pray for not only Pope Benedict in his retirement but also the College of Cardinals who will meet in conclave for the election of the new successor to the Apostle Peter.

Bishop Rhoades shared memories of the several times he met with Pope Benedict. “There was a certain awe — he was the successor of St. Peter. I was struck by his gentleness. He is a gentle man and soft spoken. Very warm and kind.”

As a newly appointed young bishop in 2005, Bishop Rhoades said the pope was very encouraging to him. “I saw him as a spiritual father,” he said.

He also expressed his sadness at the pope’s announcement, saying, “Every week I read his homilies and some of his speeches, which were very helpful to me. … I trust in the Holy Father’s discernment … He knows what’s best for the Church.” And to the faithful he exhorted, “Trust in the Lord. … I invite the people to offer their prayers and sacrifices for the Church in this transition.”

Cardinal Timothy M. Dolan of New York, president of the U.S. Conference of Catholic Bishops, said in a statement that the pope’s announcement “is but another sign of his great care for the Church.”

“The Holy Father brought the tender heart of a pastor, the incisive mind of a scholar and the confidence of a soul united with his God in all he did,” the cardinal said, adding: “We are sad that he will be resigning but grateful for his eight years of selfless leadership as successor of St. Peter.

“The occasion of his resignation stands as an important moment in our lives as citizens of the world. Our experience impels us to thank God for the gift of Pope Benedict,” he continued. “Our hope impels us to pray that the College of Cardinals under the inspiration of the Holy Spirit choose a worthy successor to meet the challenges present in today’s world.”

Cardinal Dolan was interviewed on the NBC’s “Today” show early Feb. 11 where he said he was as “startled as the rest of you” about the news.

The cardinal said he was “very much surprised” by the announcement, noting that he had seen the pope less than a month ago and there was no indication of a possible resignation.

He said he was “just stunned” when he heard the news in the morning and when he “got a call very early from Rome confirming this.”

What does not surprise the cardinal, though, is that the pope was able to make such a decision.

“I don’t think we should be surprised,” he said, that when the pope realized he didn’t “have the strength to continue” his role he had “the humility and courage” to act on it.

Archbishop Gregory M. Aymond of New Orleans also expressed his “great deal of admiration” for the pope, said he appreciated the pontiff’s “recognition of the health issues he is facing” and admired “his humility in asking the cardinals to come together in prayer to select his successor.”

In Chicago, Cardinal Francis E. George echoed his fellow U.S. prelates in saying the pontiff always has put “the will of God for the good of the Church before every other consideration” and “that same resoluteness of purpose” is evident in his decision to resign.

Pope Benedict “has taught with clarity and charity what God has revealed to the world in Christ; he has handed on the apostolic faith; he has loved all of God’s people with all his heart,” the cardinal said in a statement. “He has now shown great courage in deciding, after prayer and soul-searching, to resign his office.”

Archbishop Allen H. Vigneron of Detroit said that he, “like most of my fellow Catholics, woke up to the very surprising news” that the pope was resigning.

The surprise, he noted, was followed by sadness — “a sense of grief at losing his fatherly care for all us, bishops, clergy and faithful. We have come to love him very much and will miss him.”

The archbishop likened the news to what many people experience in their families when they witness a parent “grow old and decline in ability.”

“That is the sense we bring to this announcement. Our spiritual father has determined, by the best light given to him in prayer, that for the good of us all he must lay down his office,” he added.

Archbishop Joseph E. Kurtz of Louisville, Ky., said he, too, was surprised “along with the rest of the world” about the resignation and was “touched by his humble admission of the strength necessary to carry on this ministry of Christ.”

“This is a decision that reflects Pope Benedict’s stewardship of his office and is a sign of his deep humility,” he said.