Abby Johnson herself said, “Five years ago, I was asked to turn my book into a film. This isn’t ‘inspired by’; it really is my life story.”

A new movie, “Unplanned,” is the real-life, true story of Johnson, her awakening and conversion. The film’s producers, also, are quick to explain that everything in the script happened in real life.

As a successful clinic director of Planned Parenthood, Johnson was involved in over 22,000 abortions, counseling women about their reproductive health choices and supporting legislation to aid a cause she believed in: helping women.

She chose to have an early term abortion herself. Using a chemical method, the pill RU-486, she aborted the first of two of her children, almost bleeding to death. She lied to cover the mistakes of an abortion doctor in the Planned Parenthood office. Then, in 2009, after a life-changing experience one day in the office as she assisted in an ultrasound-guided abortion of a 13-week old baby, she left Planned Parenthood, joined 40 Days for Life advocacy group and became one of the most passionate, outspoken pro-life voices of today.

Like St. Paul the apostle, Johnson’s perspective turned 180 degrees from 100 percent pro-choice to 100 percent pro-life. In 2011, her main obstacle now removed, she converted to Catholicism. Her conversion is a testament to God’s never-ending mercy and truth.

Johnson did not stop with her own pro-life conversion. As an evangelist, she started the group “And Then There Were None,” a nonprofit that helps other abortion industry workers leave their jobs. To date, it has helped almost 500 people start their lives over without the violence of abortion.

Johnson also commented of what true feminism and empowering women looks like. “Empowerment for me as a woman began the day that I handed in my resignation to Planned Parenthood,” she explained. She has spoken out simply and honestly of the for-profit, million-dollar business of Planned Parenthood, something she knew all about as their 2008 employee of the year and one of the youngest directors of a national branch in Houston, Texas. “Abortion is a product they are trying to sell, not an unfortunate necessity they were trying to decrease,” Johnson has written. 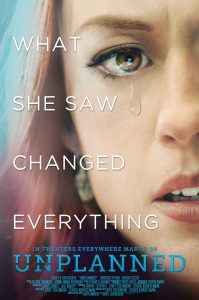 The gross facts of abortion, the millions of baby body parts and the other wounded lives of are all hidden from everyday sight. Over 1 million abortions reportedly happen in the U.S. yearly. That’s 3,000 a day, making abortions the most common surgical procedure in the United States. There are places in America where more African-American children are aborted than are born. By pulling back the curtain and viewing “Unplanned,” people can witness the epidemic.

Johnson herself recognizes this, saying: “The visual can be very impactful for us. Our society is ready to seek truth on this issue of the abortion industry … and Christ is so ready to redeem us, so we can experience His amazing, radical mercy.”

“Film shapes society. Edifying films can be powerful, drawing audiences into the human experience,” shared the movie’s associate executive producer, Michael Kenney. “This film is beautifully made, truly a story of hope and healing. (One) sees everything, everyone has a purpose. With God, there is no such thing as “unplanned.”

Jackie Appleman, executive director of St. Joseph County Right to Life, suggests: “As a former Planned Parenthood clinic director, Abby Johnson’s story offers unique insight to Planned Parenthood’s mission and operation that every pro-lifer should hear. Additionally, this is a great opportunity for anyone who is unsure or apathetic to the abortion issue to hear from someone who has been on both sides of the fence.”

The film opens in theaters March 29. It is rated “R” by the MPAA for some “disturbing/bloody images,” because an abortion occurs — an ironic rating, demonstrating how the film industry even acknowledges the violence of the act of abortion. Fifteen-year-olds may not watch this movie without a parent’s permission, even though a 15-year-old girl may legally obtain an abortion without their knowledge. 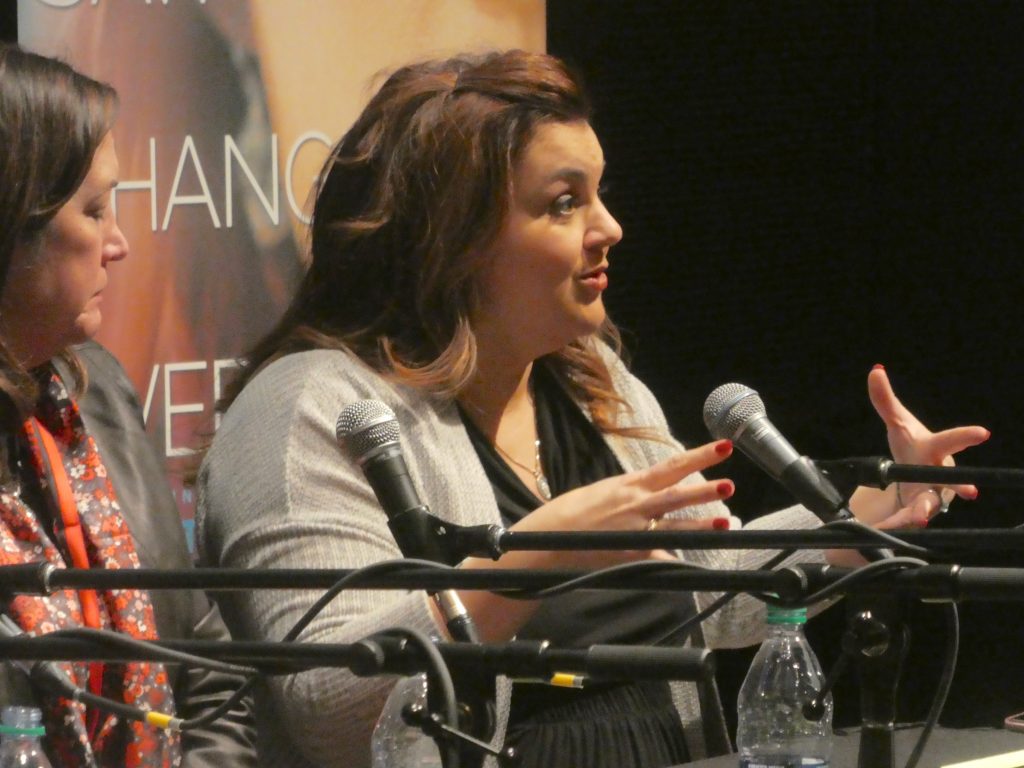 Abby Johnson shares stories from her life with a press audience at the Center for Ethics and Culture, University of Notre Dame, on Thursday, March 21. The stories also are shared in a new biographical movie, “Unplanned,” that focuses on her decisions to become a pro-life advocate — and Catholic — after witnessing an abortion as part of her position as a Planned Parenthood clinic director. The movie is currently in theaters across the country. — Jennifer Miller

A limited amount of tickets will be sold for a private showing at AMC Classic Fort Wayne on 3930 E Dupont Rd. Tickets are $15 and limited in quantity. Proceeds from ticket sales will benefit Allen County Right to Life. Visit: www.ichooselife.org/evnt/unplanned.