Updated June 24 to include new developments.

After a nearly two-year legal battle, an unlicensed abortion facility started booking appointments in a location in South Bend, Indiana, on June 19 and plans to begin offering chemical abortions the week of June 23 amid strong objections from the local community.

The story began in 2017, when the Texas-based Whole Woman’s Health Alliance applied for a license to open a chemical abortion facility in the city. The Indiana Department of Health denied the license in early 2018, citing deficiencies in the application and concerns the business was unreputable because some of its affiliated clinics had incurred serious violations.

The WWHA subsequently filed suit in the U.S. District Court of the Southern District of Indiana to challenge the constitutionality of the state’s license requirements and other regulations of abortion services. The WWHA also asked for a preliminary injunction to suspend those laws so it could operate unlicensed until the district court rendered a decision, scheduled for 2020.

Attorney General Hill filed a motion to dismiss the suit on grounds that the Supreme Court and appellate courts have long upheld the right of states to license abortion providers. The state also asked for the court to stay the preliminary injunction until the case was decided.

However, on May 31 of this year, the district court granted the WWHA the preliminary injunction to allow it to operate the South Bend facility without licensing or regulation. Two days later, Hill appealed to the 7th Circuit higher court.  He also asked the district court for an immediate stay to prevent the unlicensed abortion facility from opening until the appeals court weighed in.

On June 7, the district court denied that stay request, so on June 9, the attorney general filed a motion at the Court of Appeals to prevent that opening, saying:

“The district court has declared that something as ordinary and fundamental as state licensing – which the state does for everything from nursing homes to daycares – can be invalidated in the name of the right to abortion. This ruling turns the right to abortion into a cudgel against state licensing laws that the Supreme Court long ago declared to be perfectly valid.”

On June 21, the Court of Appeals announced it will hear oral arguments in the case July 11. At least until that hearing, WWHA will be allowed to operate without any regulation.

At the heart of all the legal wrangling is the nature of the WWHA business that operates two other abortion facilities, one in Virginia and one in Texas. One of the main reasons the Department of Health denied the license was that WWHA failed to list in its application six affiliated clinics in Texas, Minnesota, Maryland and Virginia, some of which had serious violations.

WWHA president and CEO Amy Hagstrom Miller claimed that the nonprofit WWHA is a separate entity from the for-profit abortion chain that she owns called Whole Woman’s Health. In various media interviews, she explained that she founded the nonprofit after a legal battle against Texas abortion laws left her with debt. In one of those cases, Whole Women’s Health v. Hellerstedt, the Supreme Court ruled in 2016 that some Texas laws caused an “undue burden” on women.

Buoyed by that victory, Hagstrom Miller felt she had a precedent to challenge laws in other states she considers to be “extremely hostile” to abortion. However, she realized that she needed outside money for her national strategy to “shift the stigma around abortion in our culture.” Thus, she founded the WWHA as a nonprofit to enable donations for her efforts. Money from the TARA Health Foundation funded WWHA’s Indiana license application, according to that foundation’s website.

In 2017, Hagstrom Miller’s nonprofit took in nearly $1 million in donations or grants, according to the group’s IRS Form 990. Her two other nonprofit abortion facilities are in Virginia and Texas, where the WWHA also has filed suit against those states’ abortion regulations. 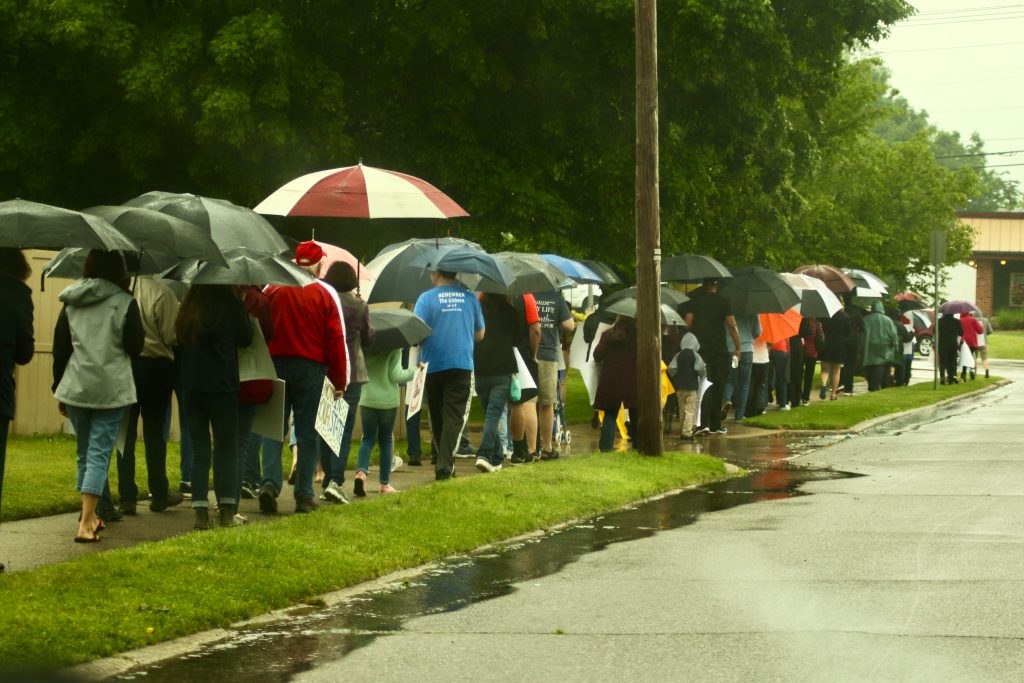 Pro-life advocates protest June 15 near a new Whole Woman’s Health Alliance facility in South Bend. The facility is accepting appointments despite being denied a license to operate by the state of Indiana. The U.S. Court of Appeals will hear arguments beginning July 11 to prevent the facility from opening. — Photos by John Acierto

Hagstrom Miller claims that, while she owns the for-profit WWH facilities and their management company (alternately called Whole Woman’s Health or the Booyah Group), the nonprofit WWHA is not owned by her, but is controlled by a board of directors.

However, the Indiana Department of Health found that the lines between the two entities were blurred and that Hagstrom Miller has actual control of both businesses. Further, the management company she owns provides services for the nonprofit chain as well as the for-profit chain.

Indeed, the WWHA 2017 Form 990 shows that none of the nonprofit’s board of directors receive any compensation and average only one hour per week directing the corporation. Further, none of the directors listed on the WWHA current website lives in Indiana, but all either have ties to the abortion industry or have advocated for abortion rights. Some are linked to the WWH for-profit business. 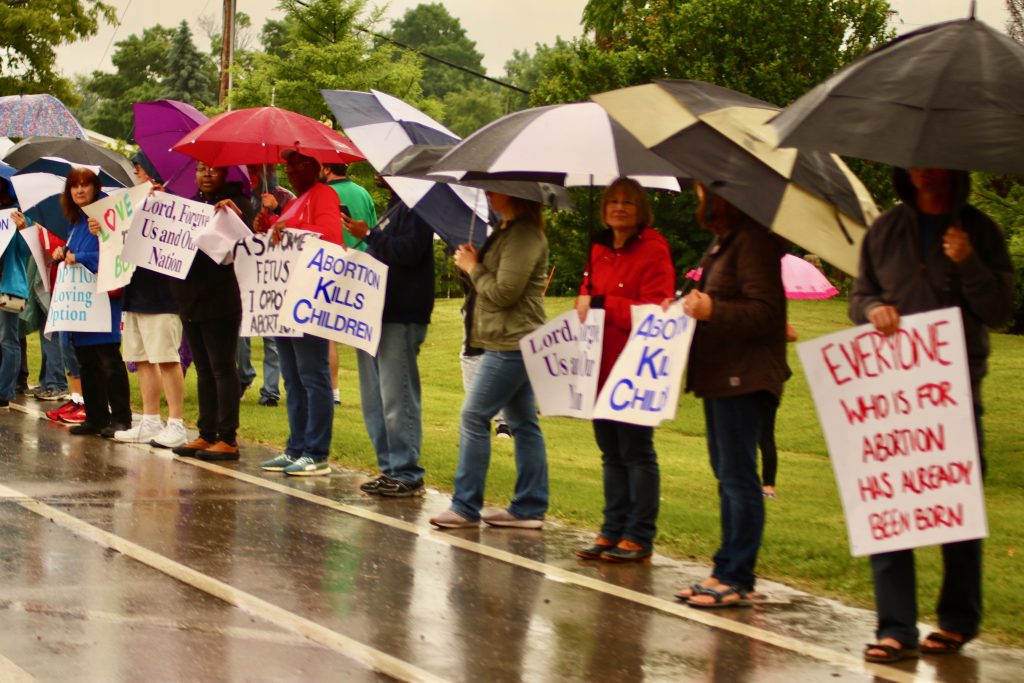 Many local residents have voiced strong objections to an outside group coming into the communicy, challenging Indiana laws and values, and expecting to operate without any state oversight. The Diocese of Fort Wayne-South Bend has a strong defense of life community in South Bend, many of whom are active in the Apostolate of Divine Mercy and St. Joseph County Right to Life organizations. SJCRL and the Indiana Right to Life organization have vocally and tenaciously fought the opening of the South Bend facility.

A national pregnancy support center founded in South Bend, the Women’s Care Center, also has acted to oppose the facility and to provide an alternate, pro-life presence in the immediate vicinity of the facility. In 2018, a zoning request that would have allowed the WCC to locate an office next door was passed by the South Bend City Council, but vetoed by Mayor Pete Buttigieg, who is now running for president. The WCC subsequently acquired a commercial site across the street and plans to open a new care center there in July.

Attorney General Hill addressed this issue at a June 15 pro-life rally that drew over 200 people to St. John the Baptist Church, which is just a few blocks from the abortion facility. Hill noted that the state has a responsibility to license all professions — whether they are dentists, lawyers, doctors, nurses or medical facilities — to keep citizens from harm.

“How anyone can determine that having a clinic of this nature where they use chemicals to abort a child could not impose some kind of dangerous concern for a woman’s health is beyond me,” he said, pledging to uphold state law. 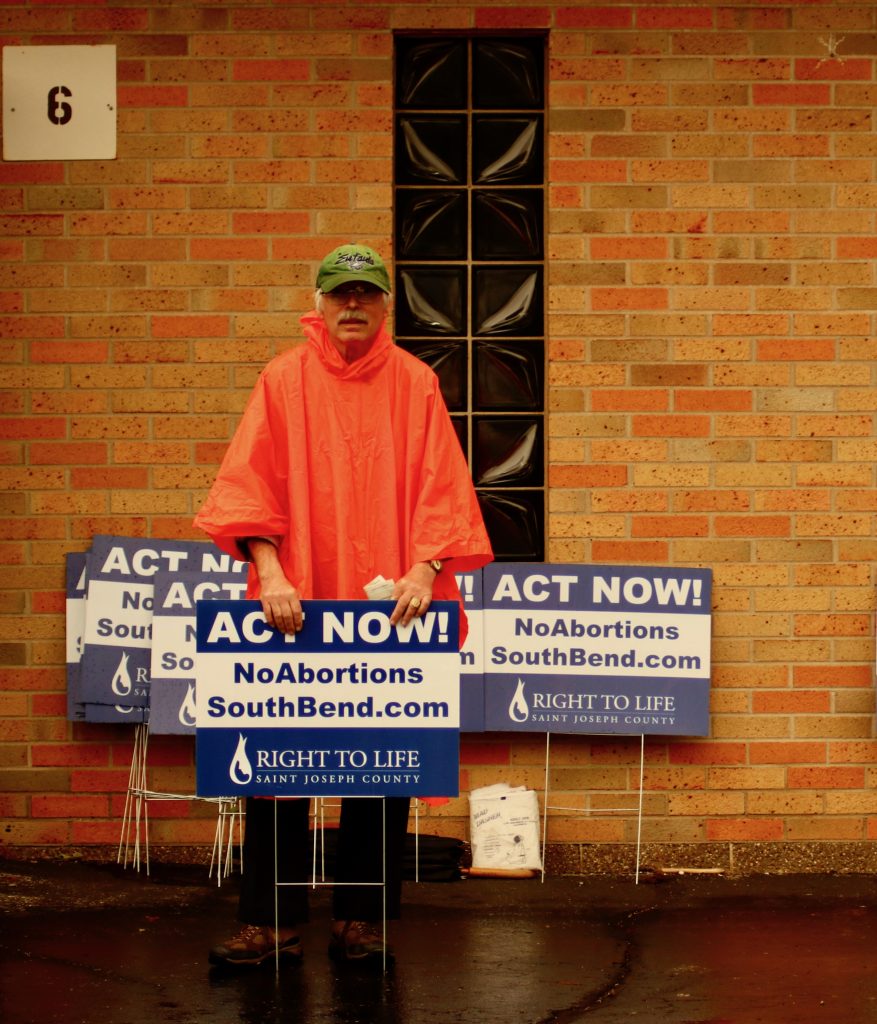