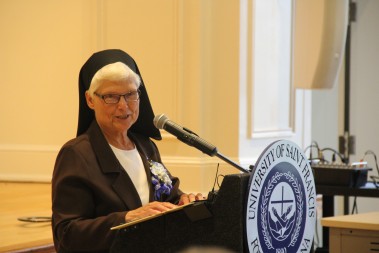 Sister M. Elise Kriss, OSF, thanked the University of Saint Francis leadership and the many donors to the project during remarks delivered at the grand opening of the USF downtown campus Tuesday, Aug. 16. The public event took place in the Business Center building, in what was formerly the Historic Women’s Club Ballroom.

The Catholic university that’s installing faith-based higher education in the heart of Fort Wayne opened its doors Tuesday, Aug. 16, to celebrate the completion of its first two classroom facilities at the new location.

Dignitaries from the city, the Diocese of Fort Wayne-South Bend and the University of Saint Francis were in attendance at a 9:30 a.m. ribbon cutting and blessing of what’s being referred to as “USF Downtown.” So far, the satellite campus consists of a new Business Center, located in the former Greater Fort Wayne Chamber of Commerce building, and the Music and Technology Center, housed in the former Scottish Rite tower.

Bishop Kevin C. Rhoades delivered the morning’s opening remarks. He called the campus “a focal point for both the academic pursuits and Catholic mission of this university, giving witness to our faith in Christ within the context of education and commerce.” He then asked those present to “bless the Lord, then, and pray he will shower his blessings on all who will work and study in this place.”

“Now one may wonder about a Business School in a university dedicated to a man who was anything but a businessman,” Bishop Rhodes suggested. “After all, St. Francis lived a life of radical poverty.  Yet, what St. Francis and St. Clare teach all of us by their poverty, including business students, is that God is our only real treasure. Those who study business or finance or economics in a Catholic university study it in the context of the capacity of businesses to serve the common good. They learn that the legitimate pursuit of profit should be in harmony with other goods, especially justice and solidarity with workers, the protection of the environment, and service of others. A Catholic business school, especially one that is Franciscan, looks at business and the economy always within the bigger picture of the common good.”

Fort Wayne Mayor and USF alumni Tom Henry and current student Jake Henry, also addressed the packed crowd in the Historic Women’s Club Ballroom. Both underscored the value of both a St. Francis education, as well as the new relationships that its move downtown will foster. Those relationships will provide traction as the greater Fort Wayne area journeys down the Road to One Million, and toward the Northeast Regional Partnership goal of 60 percent of the area’s residents possessing college degrees.

The USF Business Center, 826 Ewing St., houses the Keith Busse School of Business and Entrepreneurial Leadership; the Media Entrepreneurship Training in the Arts program; and the new Risk Management and Insurance program, designed to prepare students for the growing specialty insurance market. It includes a chapel.

USF President Sister M. Elise Kriss, OSF, underscored the value of the school’s new location to the programs it offers.

“The important part of all this is that here, we can provide our students the opportunity to work closely with professionals in their field; professionals who have a downtown presence and who can prepare them for a role in the business field after college,” she said.

At the nearby Music Technology Center, the drawing card will be state of-the-art facilities. Its new home at 431 W. Berry St., adjacent to the USF

Robert Goldstine Performing Arts Center, offers audio recording and performance space and a recording studio; all of which will provide hands-on training in an environment designed by local music professionals from Sweetwater.

During the renovation process, the university remained cognizant of the buildings’ historic value and of their legacy as part of the community’s identity — just as it did during restoration of the Scottish Rite theater.

“In a way, we’re saving history. We’re reclaiming it, really, for modern use,” Sister Elise said.

Although it was not been a long-term goal of the university to expand from its main campus on Spring Street, on the near west side of the city, to Fort Wayne’s downtown, a series of what Sister Elise called “providential” conversations and situations in 2011 culminated in Tuesday’s grand opening celebration. There had been discussion regarding the demonstrated need of several USF programs to expand; but those expansions were originally planned as new construction on the Spring Street campus.

Due to the opening of USF Downtown, the amount of new Spring Street campus construction has been reduced to science laboratories and a chapel.

“It’s appropriate to say that the move downtown was both space and program development driven,” Sister Elise said.

The USF Downtown project has been designated an official Bicentennial Legacy project as part of the Indiana’s Bicentennial Celebration. University officials are looking forward to the opportunity to work and interact closely with the downtown business and community leaders, and this designation is another reason the project is highly anticipated.

“This project is part of the university’s commitment to help grow downtown Fort Wayne and the region in general,” Sister Elise noted. “With 125 years of educating in Indiana, the University of Saint Francis understands the importance of honoring this state’s past by building for the future.”