“Jesus … gives us a mission. He sends us.” The words of Bishop Kevin C. Rhoades’ homily at the University of Saint Francis baccalaureate Mass May 5 resounded to graduates in all professions. “I’d like to suggest that our graduates also think today of their being chosen and sent forth by Jesus. … Graduates, this is what we celebrate especially at this Mass, the Lord sending you to go forth and bear fruit.” 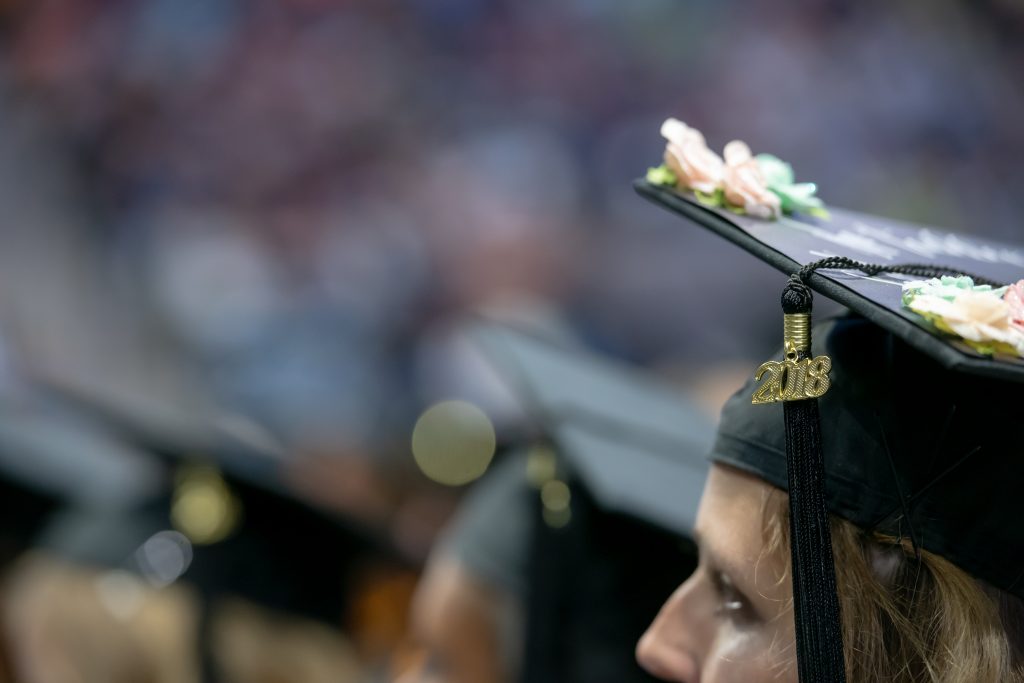 Later that day, commencement speaker and Allen County Health Commissioner Dr. Deborah McMahan addressed students with a similar message. “Wrap yourself in the power of the Holy Spirit, run into the future, and live a life that matters,” she said. An Indiana native, McMahan said she understands well the responsibility of living out her God-given mission on a daily basis. She shared a story about treating a Burmese immigrant who was frightened upon receiving a grave health diagnosis and having no one in whom she could find consolation.

“In that moment, I sent a simple prayer upward … to help me find the right words to educate her and comfort but without false hope,” McMahan shared. As a result, she was able to calm down the patient and speak to her with clarity and honesty. Stunned, the woman “had the most beautiful expression on her face” and touched McMahan’s hand as a gesture of gratitude. 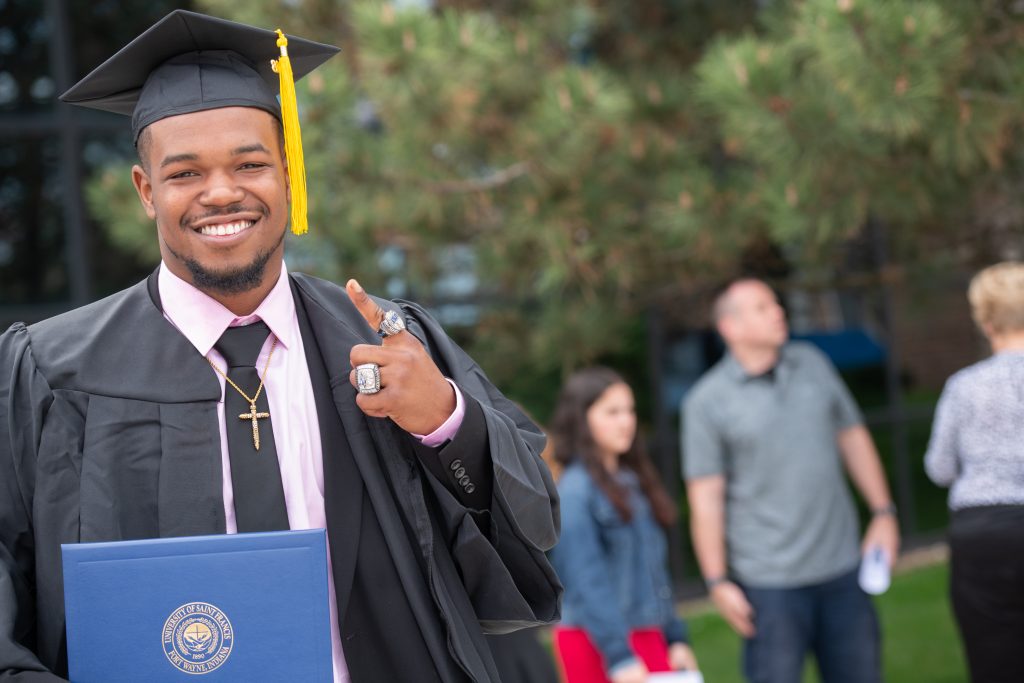 Shortly thereafter, McMahan said, she was reflecting on this incident while on vacation in Florida. She recalled a moment of epiphany, in which it seemed the Holy Spirit revealed to her that He had given her the consoling words to speak — and that the Burmese woman, in turn, saw Jesus through McMahan and received the fruit of peace.

Bishop Rhoades also suggested to the students that they try to live a life rooted in the true vine, so that they can bear the fruits of the Holy Spirit in their lives — including that of peace. “He is calling you to step out of yourselves and towards others.  And the Lord expects fruit from us … If we conform our wills to the will of Jesus our friend, love will be the fruit,” he said.

He urged the graduates not to follow the cultural trends or adopt the societal mindset that the acquisition of material possessions is the highest good. Instead, he encouraged them to foster an ongoing friendship with Jesus, which will become the catalyst of greatness in their lives. Because Jesus said, “I call you friends, because I have told you everything I learned from my Father,” Bishop Rhoades explained that this message translates into a great promise for all people who are willing to listen to and follow Jesus where He leads. 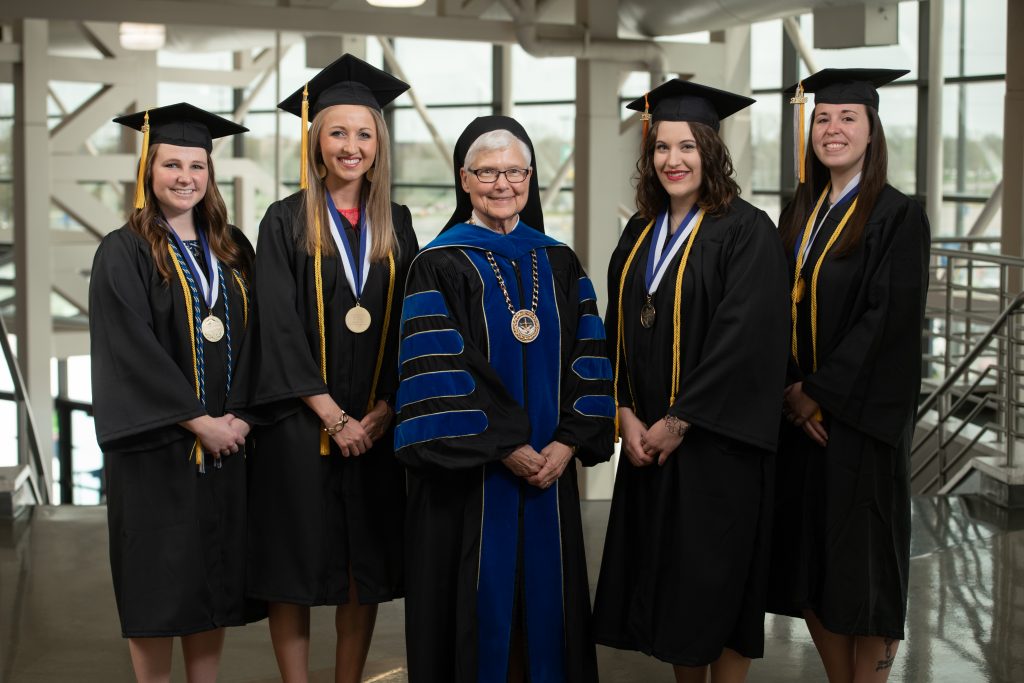 Love in the form of service to one’s community is often the result of a friendship rooted in Jesus. Commencement honorary degree recipients John Tippmann Sr. and Robert Heiny are examples of what it means to bear fruit for God’s kingdom. Tippmann has founded three local companies: Interstate Warehousing, Tippmann Construction and Tippmann Properties. He also began the Mary Cross Tippmann Foundation in honor of his mother, with a mission to “promote pro-life initiatives, encourage Christian education and ideals in both youth and adults, as well as to support efforts to relieve the suffering of the poor and others in need.”

Heiny, a World War II Army veteran, has dedicated his life not only to the service of his country but also to his family and the Catholic Church. A native of Fort Wayne, he volunteered in a local soup kitchen for years, is a retired small business owner and a devoted father and grandfather. “I don’t really feel that my ordinary life deserves this overwhelming honor,” he said, “but I’m totally blessed that so many of my family and friends are able to celebrate this honor with me in person.” At 95 years of age, Heiny also said he feels proud to call USF his alma mater; especially since his late wife, Marge, also graduated from USF with two college degrees decades ago.

McMahan advised students, “Don’t just live in Fort Wayne. Be part of Fort Wayne. Transform Fort Wayne.” With Tippmann and Heiny as examples of transforming their local community through service and charity, there seemed to be great hope that this generation of graduates will be inspired to do likewise.

The University of Saint Francis granted a total of 652 diplomas to graduates this year, ranging from Associate of Arts to Master of Science and Master of Business Administration degrees. Both Bishop Rhoades’ and McMahan’s messages to the students highlighted the Franciscan mission to “serve one another, society, and the Church” and “foster peace and justice.”

As a Catholic university that offers more than 70 undergraduate, graduate and doctoral programs, USF functions as a pillar in the Fort Wayne community and participates in the mission of Christ — bearing fruit that will last.