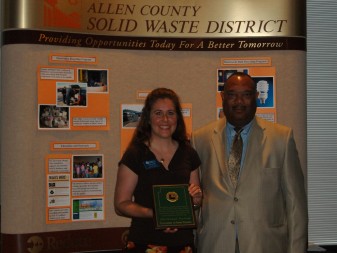 FORT WAYNE — The University of Saint Francis recently received the 3R Award (Reduce, Reuse and Recycle) in the not-for-profit category from the Allen County Solid Waste Management District. The award was presented at the Excellence in Recycling Awards luncheon.

The university was recognized for its various 3R programs including recycling or finding reuses for over 30 types of material, ranging from paper and tree limbs to bicycles and refrigerant. Proceeds from some of these programs have benefited at least 10 community organizations as well as USF student clubs.

One of the university’s more innovative efforts is a focus on construction and renovation projects across campus, which encourages use of green technologies such as energy efficient lighting, reflective roofing systems, low-flow showers and toilets, recycled fiber insulation and environmentally-friendly paints. These efforts help ensure that USF will remain energy-conscious into the future as the university continues to grow.

Going green is nothing new to the University of Saint Francis. In 2007, USF formed the Green Campus Task Force, a collaboration of faculty, staff and students committed to directing green initiatives on campus. Since then, USF has initiated several programs, including sponsoring community electronics recycling events, which has kept approximately 18,000 pounds of electronics out of landfills.

Other environmental programs across the USF campus can be found on the university’s Green Campus Web page at www.sf.edu/green-campus.

Catholics are motivated by the obligation to care for the environment and protect the earth as the common home for all humanity, a theme that increasingly is found in the teachings of Pope Benedict XVI. He wrote, “We need to care for the environment: It has been entrusted to men and women to be protected and cultivated with responsible freedom, with the good of all as a constant guiding criterion.”

Steffen initiated a program in partnership with Construction Recycling Solutions for the Archbishop Noll Catholic Center that reduced the amount of waste going into the dumpster by six cubic yards a month, or 72 cubic yards annually. The recycling program cut the amount of trash created throughout the building by 50 percent, resulting in a savings of $2,400 a year.

In addition to the building-wide recycling effort, other steps were taken to raise awareness of the 3Rs and cut the amount of waste in the building. Small steps such as stocking fax machines with used paper and relying more on e-mail also made a difference.

Overall, the new program has had a positive effect, both financially and psychologically, for all the employees of the building, who are committed to acting as responsible stewards of the earth’s resources, as called upon by the church. Today’s Catholic readers can also help in these efforts by recycling each copy of the newspaper after reading.