A doctor who performed abortions early in his career before dedicating himself to pro-life medicine received the prestigious Evangelium Vitae Medal at the University of Notre Dame on April 23.

The medal has been presented annually since 2011 by the University of Notre Dame’s de Nicola Center for Ethics and Culture to individuals or organizations for outstanding efforts to proclaim the “Gospel of Life,” set out in Pope John Paul II’s 1995 encyclical, Evangelium Vitae.

The 2022 winner is Dr. John Bruchalski, founder of Tepeyac OB/GYN, a large pro-life medical practice in Washington, D.C. and Virginia. Bruchalski founded the practice after a conversion he attributes to the intercession of the Blessed Virgin Mary. 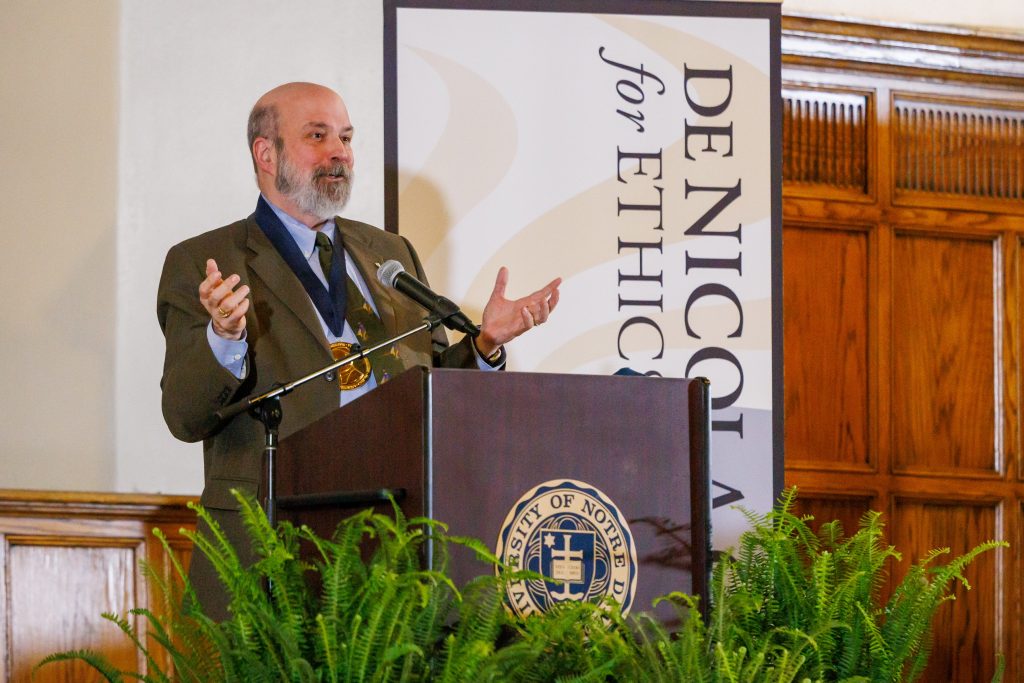 In its 28 years, Tepeyac OB/GYN has cared for thousands of women and delivered more than 10,000 babies, regardless of ability to pay. Bruchalski joins other pro-life champions who have been medal recipients, including the Sisters of Life; the Knights of Columbus; the Women’s Care Centers; and the 2021 winner, the late Vicki Thorn, founder of the post-abortion healing ministry Project Rachel. 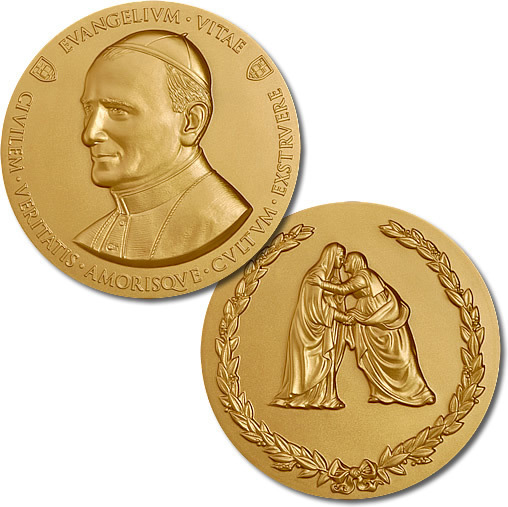 Ethics and Culture Center Director O. Carter Snead conferred the medal at an evening banquet attended by 500 current Notre Dame students, faculty, alumni and other supporters of the center. The medal citation read, in part:

“John Bruchalski came to see that true healthcare for women is not about rights, but relationships; not about limits, but love. Thanks to the gift of God who purifies and renews, a new heart and a new spirit were given him, making him capable of bringing about a renewed relationship with God and with others, and opening up new and extraordinary possibilities for understanding and carrying out all the demands inherent in the ‘Gospel of Life’.”

Those demands led Bruchalski to find a new way to care for women and children, and the result was Tepeyac OB/GYN, named for the location where Our Lady of Guadalupe appeared to Saint Juan Diego.

In a related panel discussion the day before the awards banquet, Bruchalski joined three other pro-life physicians to deliberate on the topic: “Women and Children First: The Role and Work of the Pro-Life Physician.” 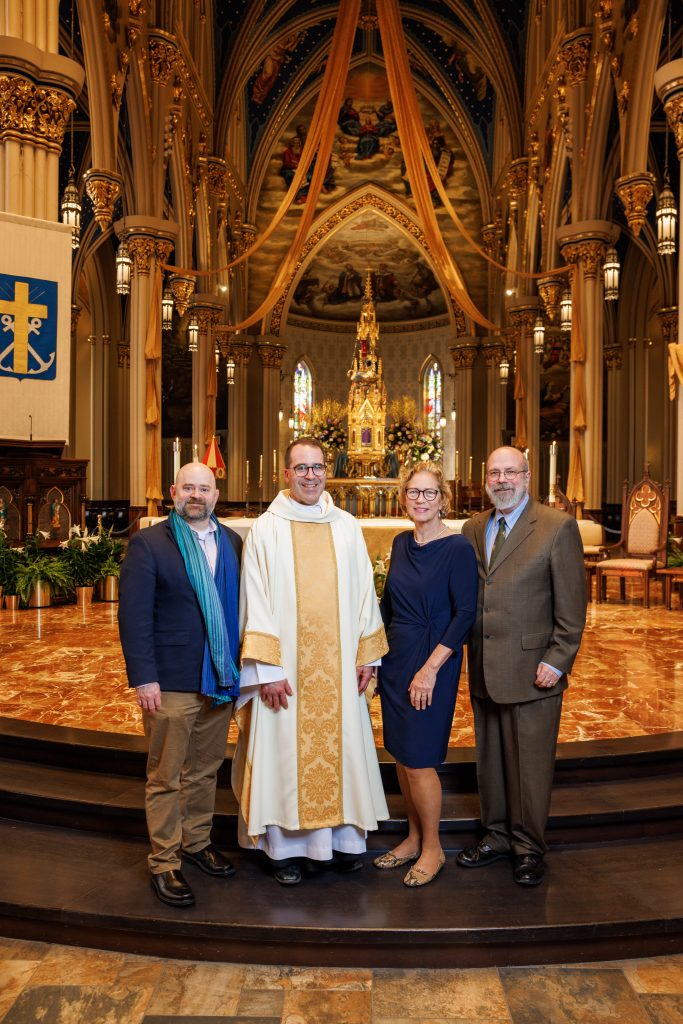 He related that during his residency in OB/Gyn, he started to reflect on the dichotomy of trying to save the life of a mother and premature baby in one hospital room and then moving to another room to end a baby’s life. That “schizophrenia,” he related, “tears your mind and hardens your heart.”

Bruchalski said he came to realize that good medicine is never pitting mother against child or “helping” a patient by destroying a life. Now, he said “We can sleep at night,” secure in the knowledge that practicing good medicine is “an act of mercy” toward other members of our human family that shows the love of Jesus Christ.

Dr. Monique Chireau Wubbenhorst, Professor of Obstetrics and Gynecology at the Duke University Medical Center and a visiting scholar at the Center for Ethics and Culture, picked up on her colleague’s comments about the schizophrenia of abortion.

“We are in a struggle for the soul of America,” she said, and she criticized the American College of Obstetricians and Gynecologists for affirming the legal right of women to obtain an abortion prior to viability, when in fact, most ACOG members refuse to perform abortions.

She also stressed the need to address the sexual morals of the culture, and she warned that pro-life medical personnel may have to suffer for standing up for their convictions.

Dr. John Y. Rhee, Chief Resident in Neurology at Massachusetts General Brigham Hospital and a teaching fellow at Harvard Medical School, provided advice on how a pro-life person can successfully navigate medical school and residency without being pressured to participate in immoral services.

He advised students to start early to practice well-formed Christian virtues and to “Do good because you want to, not because you should.” Be clear about your beliefs, he advised, but show that you are willing to work hard; be cheerful and create bonds with people; and find a trusted person in authority who can provide direction and protection.

The other panelist, Dr. Katharine Callaghan, Associate Director of the Family Medicine Residency Program at Memorial Hospital, South Bend, and Adjunct Professor at Notre Dame’s Hillebrand Center for Compassionate Care in Medicine, spoke about pro-life care for the underserved.

She said that parenting is the hardest job there is, and on top of that, single poor mothers face an “astounding” number of obstacles, especially for those who did not have a good parental model. Thus, it’s necessary to walk with these mothers for at least five years.

“It’s our call as a Church,” she said, and this walk is “central to bringing the Gospel to the world.”

Callaghan also noted that it’s very important to encourage and invite fathers to be involved in the responsibility and care for their children.

The panel was the first program of a new initiative of the de Nicola Center for Ethics and Culture titled “Women and Children First.” Center director O. Carter Snead said there is hope that the Roe v Wade Supreme Court decision that legalized abortion on demand will be overturned soon. When that happens, he said, there will be a “new landscape,” and the plan is for Notre Dame to be ready to care for families, mothers and babies — both born and unborn — in the best way possible.

Snead described the initiative as a multi-disciplinary effort fueled by a team of experts in health policy, healthcare, housing, education and other issues related to employment, poverty, racial justice, religious freedom and international human rights. The goal is to develop policies to bring justice to not only babies in the womb, but also to mothers, families and all involved, and to sustain them in a post-Roe era.