Throughout the centuries, many have speculated on what Christ’s tomb was like and what happened in the early morning hours of the third day more than 2,000 years ago. What did the tomb look like? What did it feel like? Understanding His tomb can aid faithful Catholics in more thoroughly understanding His resurrection, and there are different locations within the Diocese of Fort Wayne-South Bend where people can gain some insight on this.

In addition to its architectural structure and intricate stained glass above, the Cathedral of the Immaculate Conception in Fort Wayne holds another interesting design below. A crypt is located underneath the cathedral, just below the altar. This tomb-like room could possibly resemble Christ’s tomb, thus providing visitors with a similar physical experience of Christ inside His tomb.

“Jesus went through everything that we go through when it comes to life,” said Father Jake Runyon, Rector of the Cathedral of the Immaculate Conception. This “included being buried,” he continued, and said that just as Christ rose to life again after three days, so His faithful hope to share in the Resurrection as well.

The crypt contains the remains of past bishops and clergymen, including the previous bishop, John M. D’Arcy, who passed away on Feb. 3, 2013. It is also the final resting place for Bishops John H. Luers and Joseph G. Dwenger, the first and second bishops of the diocese. 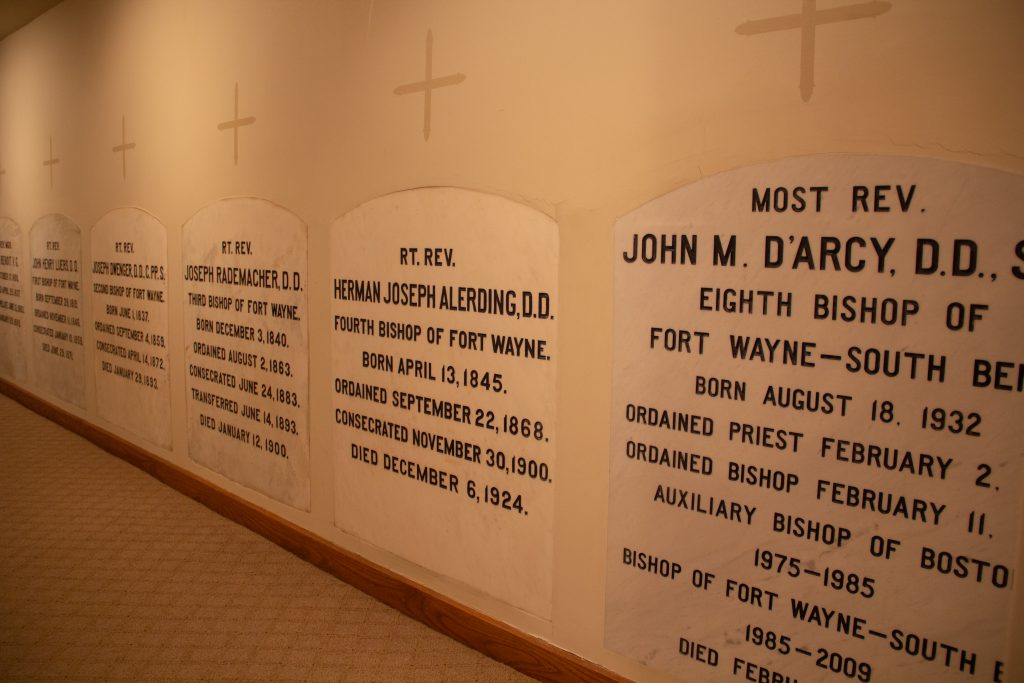 One wall holds five bishops and three priests all in a row, and a cathedral tour guide explained that three additional plaques, which line another wall, commemorate other prominent clergy buried elsewhere. There is only one empty space left available in the crypt for burial, which could become the final resting place of Bishop Kevin C. Rhoades, should he decide to be interred there, said the guide.

A small altar for celebrating Mass rests along the wall across from the vaults. A few kneelers and chairs are available for prayer, but the entire windowless space is small with low ceilings, perhaps reminiscent of the cramped quarters of Christ’s own tomb. 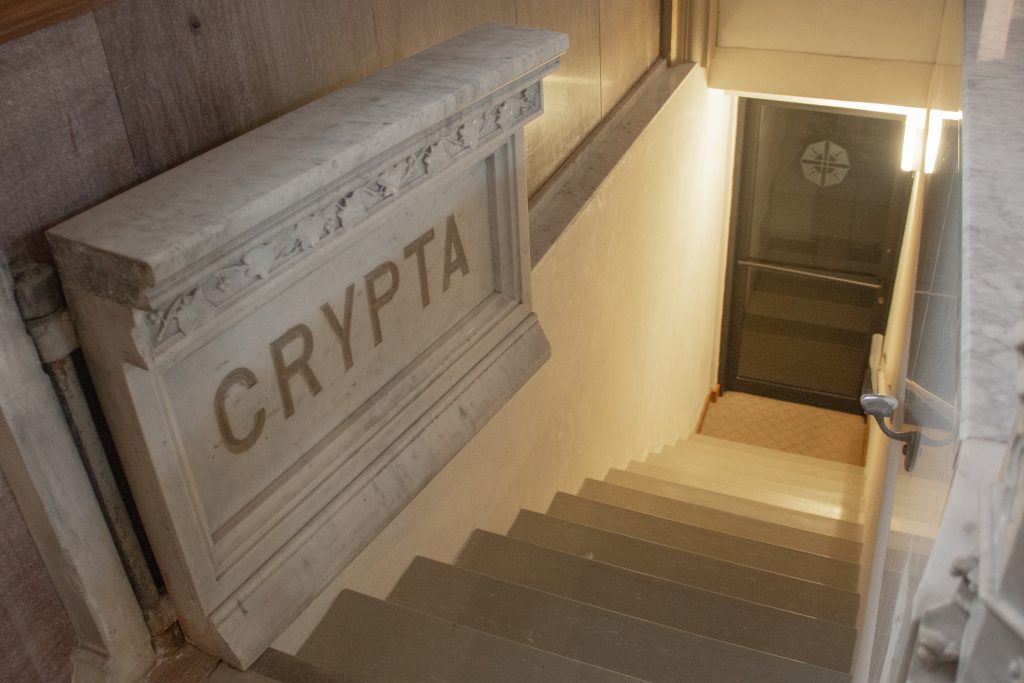 In the Cathedral of the Immaculate Conception in Fort Wayne, a staircase leads down to a crypt, which lies right beneath the altar above. Five previous bishops of the diocese and three priests are buried there.

Father Runyon said that when people visit the crypt, the space may seem, in the beginning, “off-putting” or “strange.” But after he explains the link among the “worship and death and resurrection of Jesus,” that “disconnect” disappears, he said. He explained that the bishops buried there devoted their earthly lives in servitude to Christ, so they remain within the cathedral, the very place where they accomplished this service, so that they are “connected in life and in death.”

He also pointed out that a “fear of death” and “fear of cemeteries” is prominent in American culture. But he argued that cemeteries are not representations of death; rather, they are signs of hope in which the dead can look forward to eternal life. “We’re not afraid of this stage in our life because Jesus went through the same thing,” he said.

Another place where the faithful can find a better understanding of Christ’s tomb is located in Huntington. Our Lady of Victory Missionary Sisters, a Pontifical Congregation also known as the Victory Noll Sisters, has a sepulcher that has since been designated to Huntington County. 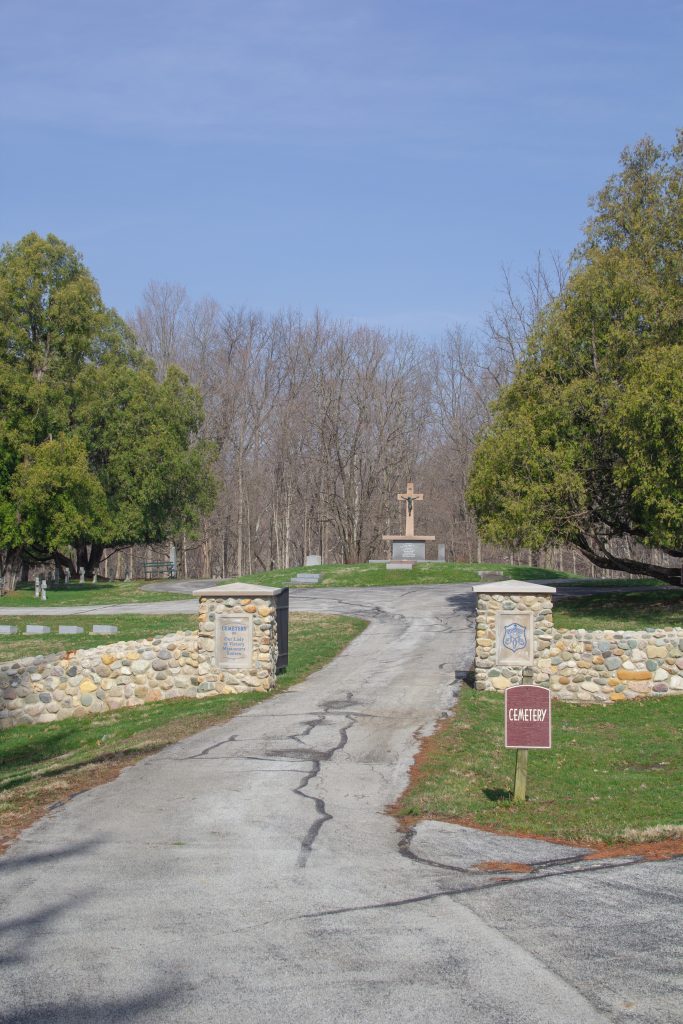 Photos by Samantha Rohloff
Both Archbishop John F. Noll, a past bishop of the Diocese of Fort Wayne, and Father John J. Sigstein, the founder of Our Lady of Victory Missionary Sisters, are laid to rest at the Victory Noll Cemetery in Huntington.

Historically, sepulchers were a part of the Stations of the Cross, said Jeff Hoffman, Director of Archives for Victory Noll. “After Constantine allowed Christians to worship openly, they started going to the various sites that Christ did,” he said. “But once the Muslims took over the Middle East, Christian pilgrims had trouble in going there, so they started setting up some of these other stations so that they could visualize it.”

The Victory Noll sepulcher, made of field stone and built in 1926, said Hoffman, is a small man-made cave that displays a coffin-like basin made of stone with a glass top. Inside it is a statue of the reposed Christ. Another statue, this time of the Blessed Virgin Mary, stands above and looks down at this resting figure of her Son.

The room itself is only about 56 square feet, Hoffman estimated, and acts as the final station to their outdoor Stations of the Cross, which were also placed in 1926, he said. Though the sepulcher does not contain real human remains or an altar like the cathedral’s crypt, it does provide one interpretation of what Christ’s tomb could have looked like, especially with His holy body still present inside. 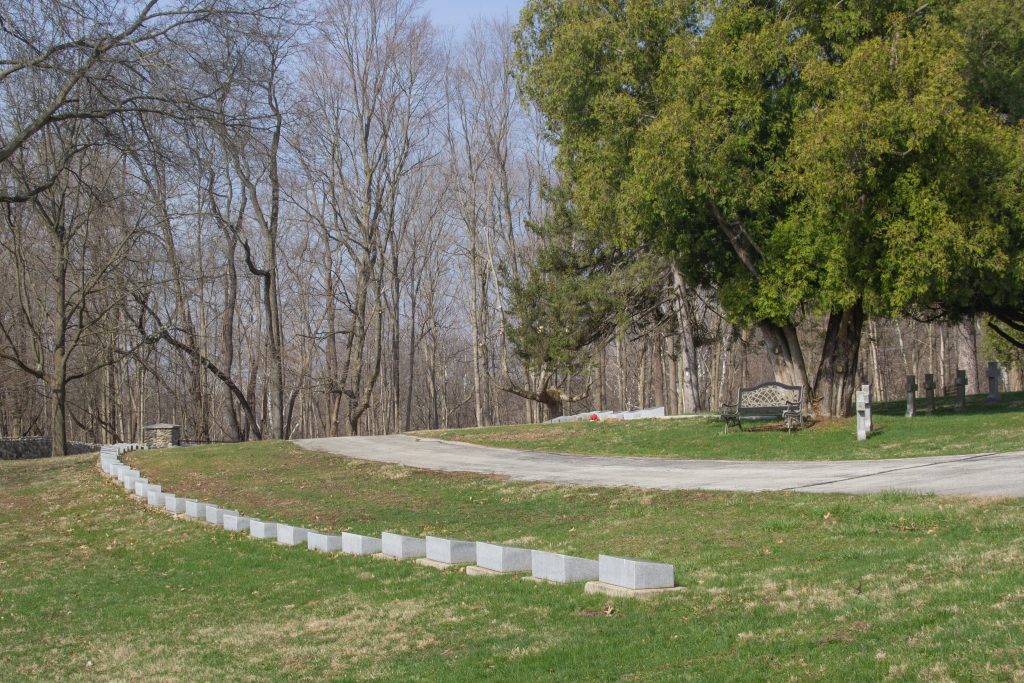 There is also a cemetery on the campus that holds almost all the order’s religious sisters, said Hoffman. This is the final resting place of Archbishop John F. Noll, who served as bishop of the Diocese of Fort Wayne from 1925 to 1956. Archbishop Noll was heavily involved in the purchase and building of Victory Noll, and one of the three complimentary plaques found in the cathedral’s crypt is designated for him. The congregation’s founder, Father John J. Sigstein, is also buried in the Victory Noll cemetery.

It’s also important to note that Christ’s tomb, though legendary in status, was not a legend itself. Jerusalem is home to the fourth-century Church of the Holy Sepulcher, the place where Christ is thought to have been crucified and buried.

Father Jonathan Norton, pastor of Sacred Heart Parish in Warsaw, shared his experiences of visiting the sacred space, having made pilgrimages there in 2019 and in 2020. “There’s like a little chapel inside of the church,” he explained. This chapel is known as the Aedicula, a shrine built in the 19th century that surrounds Christ’s tomb. Another feature of the Holy Sepulcher is the Stone of Anointing, where pilgrims often stop to venerate. “It looks like it’s just sort of a flat stone, and you are able to go in there and kneel and touch that stone. And that’s believed to be the very spot where Jesus was laid … It’s very profound to be at that spot.”

Father Norton noted that the faithful, when they visit the place, see it for what it truly is: historical fact, not myth. “When people visit that, I think they realize that ‘Wow, this is where it happened. This really took place.’”

Visiting the Holy Sepulcher, Father Norton said, is important for his faith journey because it is “the spot where death was defeated, and that’s what we hope for as Christians. We have hope because of Jesus Christ, that we too, by His grace, will conquer death.”

So, whether through exploring an interpretation of Christ’s tomb or visiting it in person, these enclosed, prayerful spaces can assist the faithful in more deeply understanding Christ’s tomb and resurrection. And hopefully, their own interment at the end of their earthly lives will culminate in eternal life – just as Christ rose from His tomb, full of life.