When St. Augustine parishioner Cheryl Ashe first saw the long, yellow banner with Jesus crucified in the middle, surrounded by the Stations of the Cross, she felt it would be important to share with the whole Diocese of Fort Wayne-South Bend. The hand-painted cloth was made in an artist colony in Uganda in 2012, and the South Bend parish was able to purchase it two years ago to display during Lent.

“We’re a Universal Church, and here a predominantly Caucasian diocese, but the fastest-growing parts of the Church are in Africa and Asia. Why not remind people that the art you traditionally see is not necessarily what Mary and Joseph looked like?” Ashe asked. 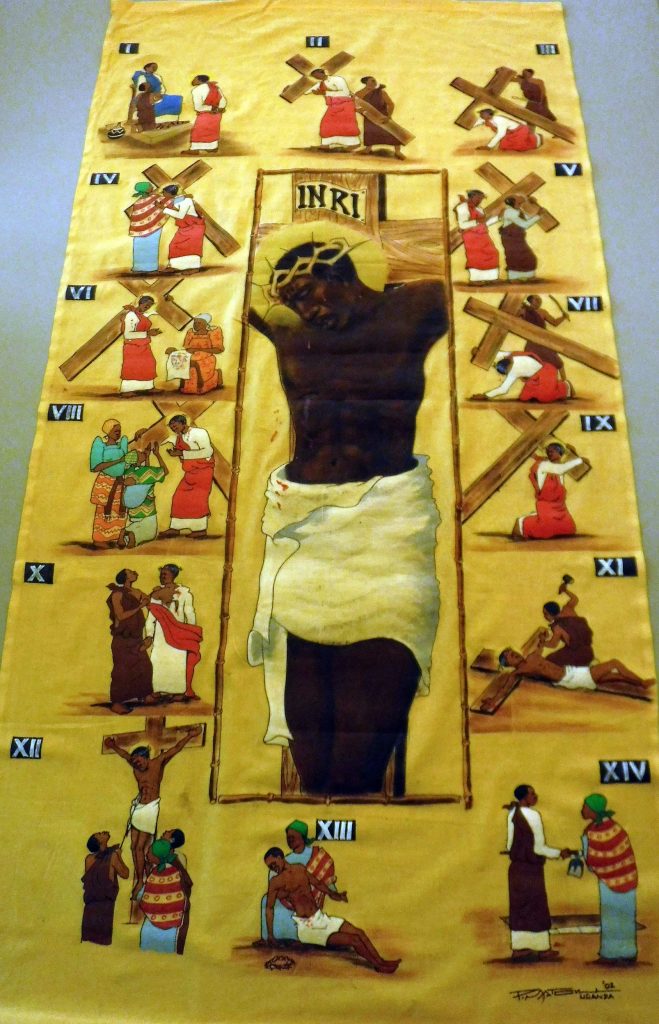 Photos by Jennifer Miller
Displayed at St. Augustine Parish in South Bend, a banner that was made in Uganda depicts Jesus’ crucifixion and the 14 Stations of the Cross with images relatable to the African American community.

Artists for centuries have expressed their religious beliefs through the context of their cultures. To better express their faith through their own understood way of living, they have depicted the Holy Family in their various cultures and time periods.

Mary put herself into this context as well. In each of her apparitions on earth, the mother of the Lord has come to God’s people in a language, skin color and outfit they would recognize.

“Now we recognize the importance of reflecting the scenes of Jesus’ life, as it pertains to different people’s culture,” Ashe explained. For her, seeing an image of Jesus that reflects her faith family is important.

Father Leonard Collins, CSC, agreed. He explained that the parish of St. Augustine was founded in 1928 with African American roots, when six families from Pascagoula, Mississippi, migrated to South Bend for work in local factories. They couldn’t find a welcoming Catholic church in which to worship. They did, however, meet a Holy Cross priest at the University of Notre Dame who offered to say Mass.

The group quickly developed into a formal parish. In the 1960s, St. Augustine became a diocesan parish staffed by Holy Cross priests, but the African American heritage and spirituality of the original worshippers are still strongly present. Parishioners from all around South Bend gather to worship and share hospitality together while children play, people catch up and elderly parishioners debate politics. And each year the parish’s Tolton Society offers for sale a calendar made by the Josephite Pastoral Center, with images of a Jesus with darker skin than the historic middle eastern image of Him.

Such images are important to people’s spirituality, so they can pray with a visual of a God who looks like they do. All people, the Bible says, are made in His image and likeness.

This was the inspiration behind the parish’s Lenten banner of Christ crucified. Holy Cross priests in Uganda started an artist colony so that local, self-trained artists could share their work with the larger community and earn a living wage from it. Wooden carvings, batik cloth prints and Last Supper banners are just some of the many pieces St. Augustine has acquired from the Ugandan artists.

The Lenten piece, which the parish hangs in the main nave of the church, features an African Jesus, the Savior, dying on the wooden cross. With both a crown of thorns and a halo surrounding His head, the artwork shows both the fully human and fully divine reality of the Son of God as He offers His life for the salvation of the world. Blood drips down His body, reminding the faithful of the precious Body and Blood that they they are about to receive in holy Communion.

The image is so realistic that one can feel His pain and anguish on the cross, as well as His faith and obedience to the Father’s will, in the suffering. The 14 Stations of the Cross, from His being condemned to death to being buried in the tomb are depicted in a typical Ugandan cultural context with Pontius Pilate dressed as an African judge, Veronica clothed as a Ugandan single woman and Simon the Cyrene as a local laborer.

Allowing worshippers to connect in a new way with the familiar crucifixion story reminds all of the universal, salvific message of God.