WASHINGTON (CNS) — Archbishop Christophe Pierre, the 75-year-old apostolic nuncio to the United States, said when he met Pope Francis at the Vatican Sept. 6, the pope asked him to remain in his post instead of retiring.

“He asked me to stay, so I stay as long as he wants. And I am happy to do so,” the archbishop told Catholic News Service. 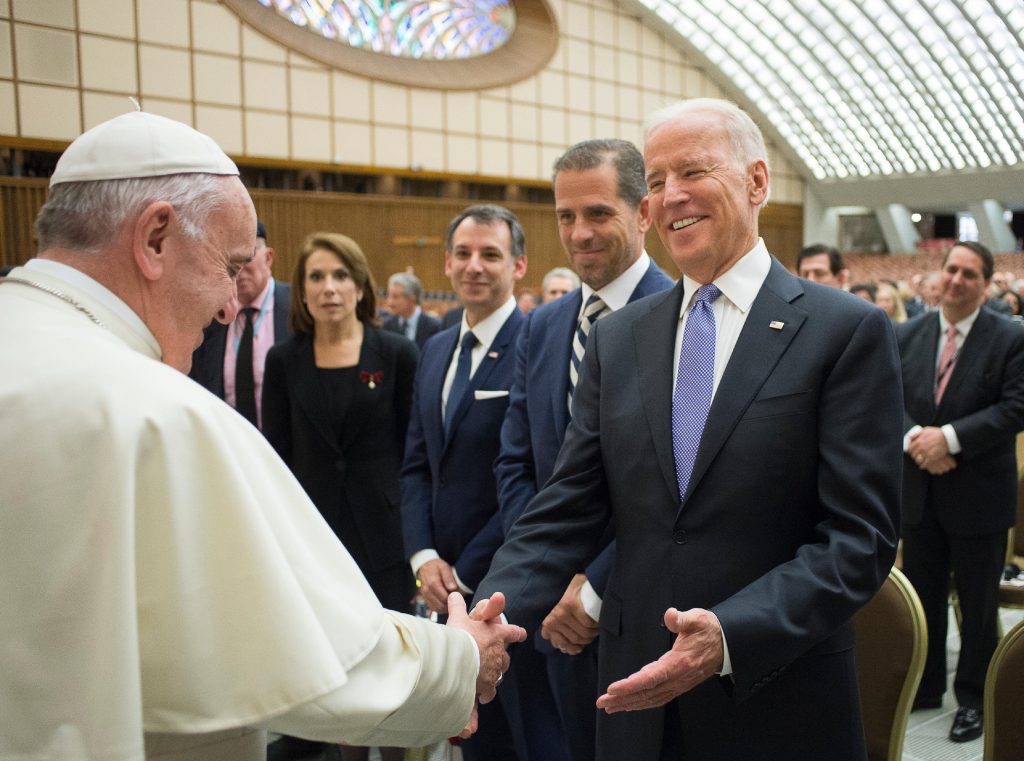 Pope Francis greets then-U.S. Vice President Joe Biden after both spoke at a conference on adult stem cell research at the Vatican April 29, 2016. In a recent interview, Archbishop Christophe Pierre, the Vatican ambassador to the U.S., said he is helping the Holy See prepare for Biden’s first presidential visit to the Vatican, sometime during an Oct. 30-31 Rome summit of leading rich and developed nations. “It would be an anomaly if he did not meet the pope while in Rome,” especially since Biden is the first Catholic president in 58 years, the nuncio said. (CNS photo/Vatican Media)

At the top of the nuncio’s to-do list is helping the Holy See prepare for Joe Biden’s first presidential visit to the Vatican, while the president is in Rome for an Oct. 30-31 summit of leading rich and developed nations.

The archbishop confirmed the Biden-pope meeting indirectly: “It would be an anomaly if he did not meet the pope while in Rome,” especially since Biden is the first Catholic president in 58 years.

Despite a “tense situation because of the agenda of the Democratic Party on abortion,” Archbishop Pierre said he believes it will be a good meeting.

Onlookers must think beyond institutions to the people themselves: “These are two human beings with huge responsibilities trying to meet each other. They are not wooden figures. And behind them is a big machine — and the world.” So problematic matters will not be solved quickly, the diplomat said.

Meanwhile, the Church is a major factor in American society, “very much present in all issues,” he said. “You have 80 million Catholics, the huge structure of the Church, and the bishops are very active.” 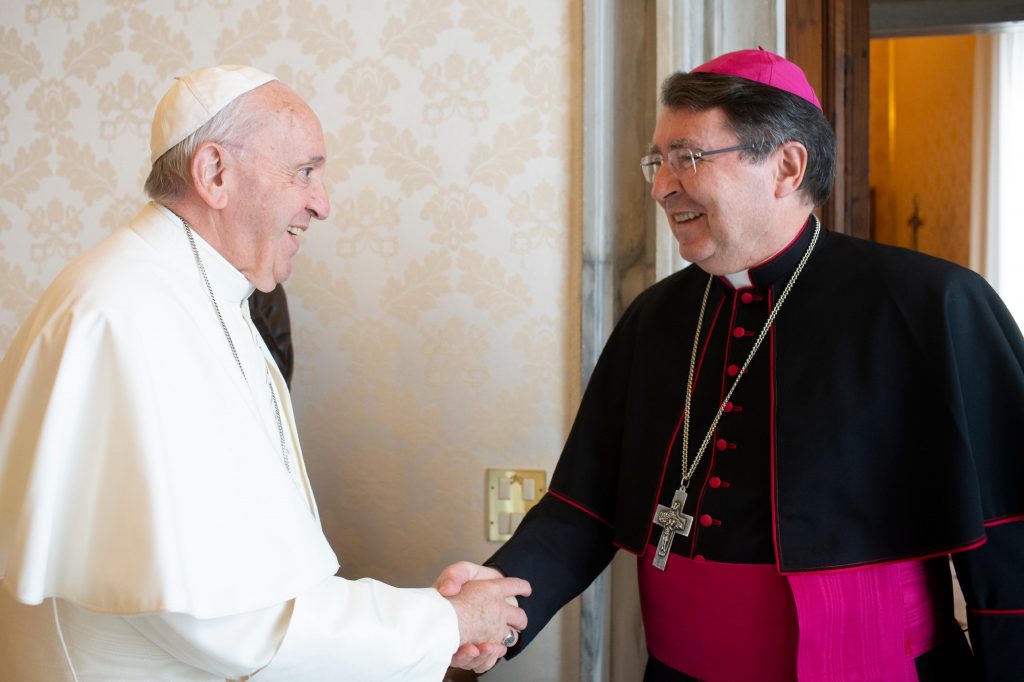 Pope Francis shakes hands with Archbishop Christophe Pierre, apostolic nuncio to the United States, at the Vatican Nov. 10, 2018. In a recent interview, Archbishop Pierre, 75, said said when he met Pope Francis at the Vatican Sept. 6, 2021, the pope asked him to remain in his post instead of retiring. (CNS photo/Vatican Media)

The nuncio thinks polarization is one of the most difficult things facing the United States because “as long as you are polarized, you don’t find solutions.”

He says the Church defends values without transforming its mission into an ideology.

Ideology quickly gives way to “cultural war,” which leads people to divide reality into those “with us” versus those “against us,” a simplistic framework that the nuncio calls “mystification,” because “reality is extremely complex.”

The Church is called to preach the Gospel, advocate dialogue, and resist extremism, he said.

“When the Church is contaminated by polarization, we go nowhere” — a real danger, the archbishop said. Instead, the Church — simultaneously in the world, but not of the world — is called to be “salt of the earth” and “light of the world.”

As the pope’s eyes and ears in the United States, Archbishop Pierre is the Vatican’s interlocutor with the U.S. government as well as with the bishops. One of his most important assignments is to help the pope select new bishops, “a businesslike thing” that occupies much of his work with the Vatican.

Archbishop Pierre said Pope Francis — whom he’s known since being appointed nuncio to Mexico in 2007, when Argentine Cardinal Jorge Bergoglio was a leading figure in Latin American Church deliberations — is easy to talk to and not intimidating, while “challenging us all the time.”

“The pope is not a dictator, he is a mobilizer,” said the French-born diplomat. “What he wants is to help the Church be Church here (in the U.S.).”

“That is why I insist a lot on synodality, which means walking together, when I talk to bishops,” the nuncio said. “The strength of the Church is together, a synodal approach, which has to be implemented.”

Archbishop Pierre is intensely at work on the 2023 Synod of Bishops on synodality, which Pope Francis officially opened Oct. 10. In the last two weeks of September alone, he visited Missouri, Massachusetts, Illinois, Nevada and Kentucky, carrying the pope’s message.

“It is exhausting,” he laughed.

The nuncio described a primary function of his job as providing analysis so the pope can play his role in a complex world — analysis that is “never black and white.”

“We try to preach the Gospel in this world; we aren’t creating a new society,” the archbishop said.

Over the past 45 years, he has worked in nine countries, most of them poor.

“Beautiful figures of dictators: Machel, Mugabe, Fidel Castro. Then a bit later, I was with Jean-Bertrand Aristide in Haiti. Then, I was with Trump,” Pierre said.

“We are not like foreigners. As soon as we arrive in a country, we are part of the country, because we are in the Church,” he said. “This is our specificity.”

Gazing down on the nuncio as he spoke were portraits of several predecessors.

The largest portrait depicts Italian Cardinal Amleto Cicognani, who built the substantial nunciature. He represented the Vatican in Washington as apostolic delegate — the two countries did not yet have formal diplomatic relations — from 1933 to 1958.

Archbishop Pierre said then-Archbishop Cicognani was hardly utilized by Pope Pius XII, but with the ascent of Pope John XXIII, in a “twist of history,” the Italian diplomat was named to the College of Cardinals in 1958, joining his brother, Gaetano, already a cardinal.

Pope John XXIII named Cardinal Amleto Cicognani secretary of state in 1961. He served as the Vatican’s top diplomat until 1969, when he resigned at age 86.

“He is inspiring,” said Archbishop Pierre, “But I don’t identify with him.”

A smaller painting features Archbishop Carlo Maria Vigano, nuncio from 2011 to 2016 and author of scandalous statements against Pope Francis.

Asked why the portrait remains on the wall, Archbishop Pierre replied, “Because we are not Americans (who) want to take away the statues. We respect history.”

Besides, Archbishop Pierre added, “I’ve known him for 40 years.”

Gaetan is an occasional contributor to Catholic News Service and the author of “God’s Diplomats: Pope Francis, Vatican Diplomacy, and America’s Armageddon.”