BALTIMORE (CNS) — During their Nov. 11-13 meeting in Baltimore, the U.S. bishops elected new officers and discussed challenges in the Church and the nation. They spoke of their renewed efforts to help immigrants, youth and young adults, pregnant women and the poor, as well their steps to combat gun violence and racism.

Unlike recent previous meetings, their response to the clergy abuse crisis was mentioned but was not the primary focus.

On the second day of the meeting, Nov. 12, the bishops elected Archbishop Jose H. Gomez of Los Angeles to a three-year term as president of the U.S. Conference of Catholic Bishops and Archbishop Allen H. Vigneron of Detroit as conference vice president. 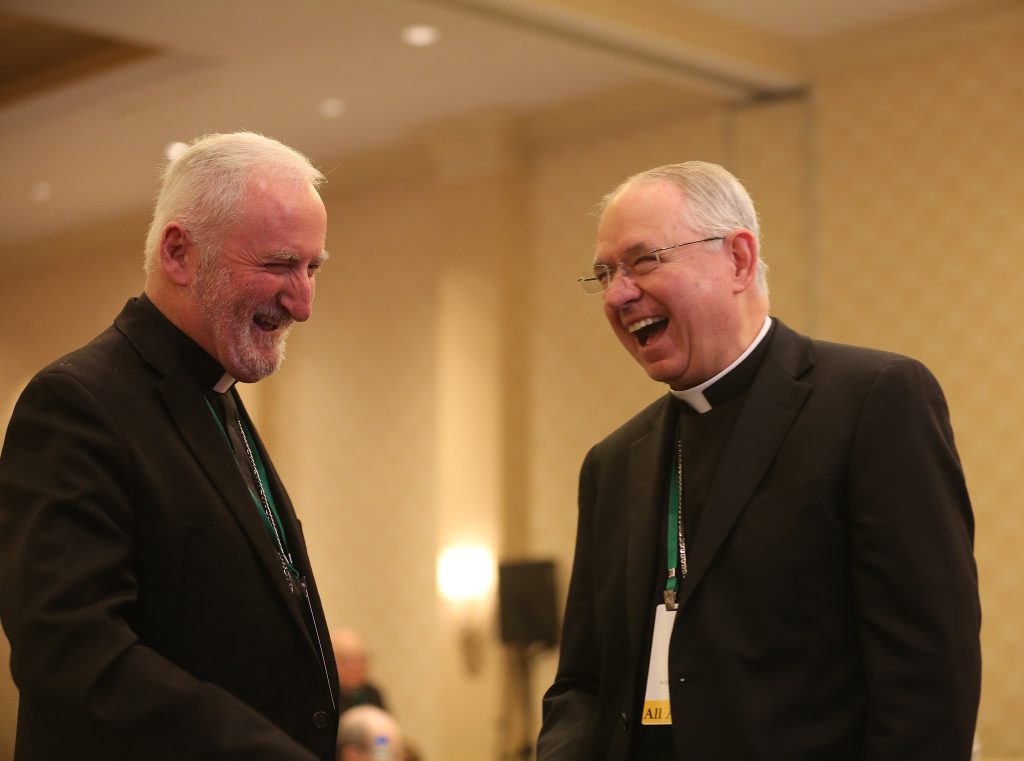 Archbishop Gomez, the first Latino to be elected to this role, was chosen with 176 votes from a slate of 10 nominees. He has been USCCB vice president for the past three years and his new role began at the end of the Baltimore gathering.

At the start of the meeting, the bishops voted overwhelmingly on a revised set of strategic priorities to take them into the next decade. The next day, they approved adding new materials to complement “Forming Consciences for Faithful Citizenship,” their long-standing guide to help Catholics form their consciences in public life, including voting. The addition included the statement that called abortion the preeminent social issue of our time.

The second day of the bishops’ meeting coincided with oral arguments at the Supreme Court over the fate of the Deferred Action for Childhood Arrivals program, known as DACA. Bishops at the Baltimore meeting spoke up in defense of DACA recipients on the floor and in interviews with Catholic News Service.

Bishops also heard a wide-ranging report on immigration Nov. 12 that included updates of policy; how programs to resettle refugees, including those run by the Catholic Church, have closed or reduced activity because the administration has moved to close the country’s doors to those seeking refuge; and efforts on the border to help asylum cases.

The bishops’ second day of meetings also included a presentation of the pope’s document “Christus Vivit,” which was issued following the 2018 Synod on Young People, the Faith, and Vocational Discernment. Archbishop Charles J. Chaput of Philadelphia and Bishop Frank J. Caggiano of Bridgeport, Connecticut, collaborated on the presentation, which included two young adults.

Brenda Noriega, a young woman from the Diocese of San Bernardino, California, said the document “lays out some areas that are especially important to encounter, including young people impacted by marginalization and poverty, young people feeling overwhelmed by culture, family or judgment, young migrants and refugees and immigrants and those impacted (by the) immigration situation.” These areas also are important, she added, to youth who are bullied or ostracized online, people who feel unloved, “youth or young adults experiencing or witnessing abuse in all forms.”

The bishops also heard that a new “pastoral framework for marriage and family life” should be ready for a vote by the U.S. bishops by next November at the latest, according to Archbishop Chaput, chairman of the U.S. bishops’ Committee on Laity, Marriage, Family Life and Youth.

He said the document might be ready for a vote when the bishops meet in June 2020 but stressed that it is not a “plan,” since it is intended to be applied within parishes and dioceses.

On the first day of the meeting Nov. 11, the bishops raised pressing issues that included the priesthood shortage, gun violence, young people leaving the Church and the need to provide support services for pregnant women.

Archbishop Christophe Pierre, papal nuncio to the United States, mentioned some of these challenges in his opening remarks, along with the need to welcome migrants and fight racism. He also urged the bishops not just to focus on the challenges before them but to consider how they could further develop collegiality and collaboration with one another. 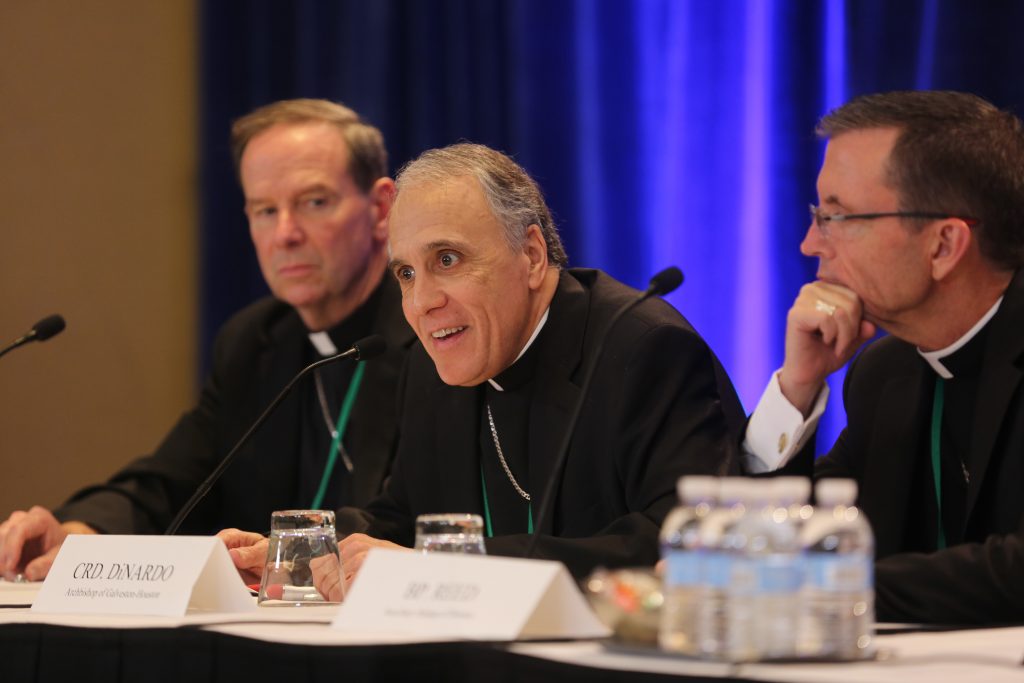 In his final address as president of the U.S. Conference of Catholic Bishops, Cardinal Daniel N. DiNardo of Galveston-Houston told his fellow bishops that it has been “an honor to serve you, even in the difficult times.”

The 70-year-old prelate thanked the bishops, whom he called brothers, for the past three years and was thanked by them in return when the group gave him a standing ovation at the end of his nine-minute presentation.

“Let’s begin anew,” he said at the close of his address, veering away from prepared remarks, and quoting St. Augustine.

The cardinal, who suffered a mild stroke earlier this year, did not elaborate on specifics of the abuse crisis in the Church, particularly highlighted this past year, but spoke of the bishops’ continued work of transparency related to dealing with the crisis. He said the abuse measures adopted by U.S. bishops at their meeting last June are “only a beginning. More needs to be done.”

In another vote, the bishops voting overwhelmingly on a revised set of strategic priorities to take them into the next decade. They also discussed upcoming votes during their gathering, such as news materials to complement “Forming Consciences for Faithful Citizenship,” their long-standing guide to help Catholics form their consciences in public life, including voting.

Retired Army Col. Anita Raines, who chairs the National Advisory Council, said in a report to the bishops that the group supported the prelates’ effort to promulgate its “Faithful Citizenship” document and supplemental materials.

The bishops also heard about societal issues such as gun violence and Bishop Frank J. Dewane of Venice, Florida, said Catholic clergy and lay leaders can play a role in bringing together people along the rural-urban divide to build understanding of the need for sensible policies that can end the scourge of gun violence.

The bishop, who is chairman of the U.S. bishops’ Committee on Domestic Justice and Human Development, outlined the USCCB’s long-held stance of the need for “common sense” legislation that governs the availability of guns. But he also said it was time for people to come together so that there is greater understanding of how gun violence affects urban communities in particular.

He told Catholic News Service that the USCCB’s work on the legislative front was important, but that a pastoral response to gun violence was needed.

“It’s time for a different approach,” he said.

In a new approach for the bishops’ pro-life efforts, Archbishop Joseph F. Naumann of Kansas City, Kansas, invited his fellow bishops to devote a year of service to pregnant women starting next March.

He said Catholic parishes can be one of the first places a woman facing an unexpected or challenging pregnancy can turn to for assistance rather than think of seeking an abortion and they could offer a variety of support services to women who may be thinking about whether to carry their child to term.

The bishops also heard about plans to revise the U.S. Conference of Catholic Bishops’ existing Program of Priestly Formation for U.S. dioceses.

In his homily at the Nov. 11 Mass in the hotel ballroom, Cardinal DiNardo stressed that St. Martin of Tours, whose feast was celebrated that day, offered them a fitting example.

“Brothers, we have someone to imitate tonight,” he told them.

Contributing to this report were Rhina Guidos, Mark Pattison and Dennis Sadowski.