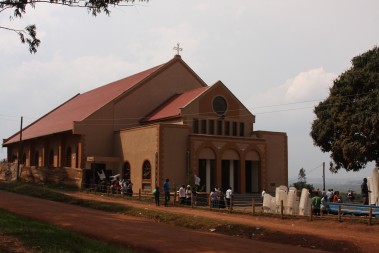 GRANGER — It was fitting that Msgr. William Schooler, pastor of St. Pius X Parish in Granger and Msgr. Lawrence Kanyike, pastor of St. Joseph Parish Kyengera, Uganda, would participate together at the dedication of Msgr. Kanyike’s new church building on July 29. With a friendship that has spanned nearly four decades, two continents and two cultures, the monsignors were a part of a celebration with Kampala, Uganda, Archbishop Cyprian Lwanga, and an estimated 5,000 people for the church’s dedication.

“Msgr. Kanyike and I have remained friends over the years. He has returned to the United States every other summer, giving mission talks in the five parishes I have served since ordination, St. Matthew in South Bend, St. Monica in Mishawaka, St. Paul of the Cross in Columbia City, St. Jude in Fort Wayne, and St. Pius X in Granger,” said Msgr. Schooler.

The concept of a new church building for his parish was conceived from a conversation Msgr. Kanyike had with Archbishop Lwanga. “He asked me if I could start a new parish and I gladly accepted. It was a bush area without a church and I decided I should first put up a new church. I presented the idea to my mentor Father Schooler and he made all the connections for me beginning with St. Pius X in Granger,” Msgr. Kanyike recalled.

Through the generosity of St. Pius X parishioners and Msgr. Kanyike’s fellow Notre Dame alumni Susan and Bill Flanagan, who donated one third of the $300,000 for the new church building, the dream became a reality.

A grateful Msgr. Kanyike remarked, “I thank God for my friends who, despite living far away from Uganda, have trusted me with so much money and that I have not disappointed them.” 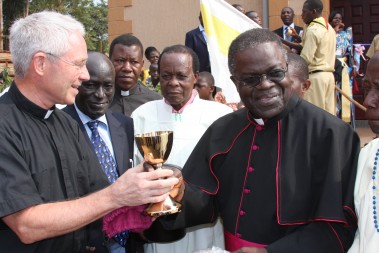 Msgr. William Schooler presents one of the chalices donated by the Knights of Columbus Councils 4263 and 7052 from the Diocese of Fort Wayne-South Bend to Msgr. Lawrence Kanyike.

Also during the church dedication Msgr. Schooler presented Msgr. Kanyike with two chalices to be given to new priests at their ordination and vestments that were not being used at St. Pius X.

“I was impressed with the joyful spirit of the congregation and amazed as dancers brought up the Lectionary and the gifts at the Preparation of the Altar and Gifts. Being part of the feasting and dancing following the four-hour liturgy was also a great joy,” Msgr. Schooler added.

The entourage that accompanied Msgr. Schooler to the dedication included his nephew Ben, Susan and Bill Flanagan and their son Matthew, and St. Pius X parishioner Eric King. Fellow St. Pius parishioner Mike Wargo was also in the area to bring hospice to the people of Uganda.

Another highlight of the trip was visiting the St. Monica Health Clinic that St. Pius X parishioners helped to build through special collections to Msgr. Kanyike in his home village.  The sisters at the clinic, whom Msgr. Schooler noted provide quality care to the poor, expressed their gratitude to the St. Pius community by presenting him with two live chickens.

In order not to ruffle the feathers of the Transportation Security Administration for their flight home, Msgr. Schooler gave the chickens to the driver of Archbishop Lwanga, who was delighted to take them home to his mother.

For his next project, Msgr. Kanyike is looking forward to modifying the old building that is being used as his rectory. “Right now no one can say that Father Larry has a decent place to lay his head,” he remarked. 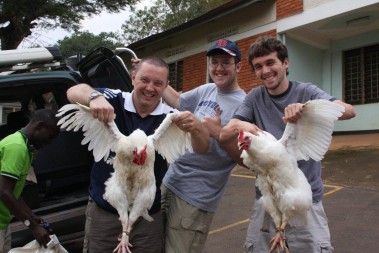 Msgr. Schooler took away many insights from his visit to Uganda. “This experience has taught us many things. We tend to take for granted our lifestyle in the United States and do not see the overwhelming poverty of those who live in the Third World. Although we Americans may have more material wealth, the people of Uganda can teach us about the wealth and joy of living in so many other ways,” he concluded.