Johnathan and Michael Hickey share a great many things – hobbies and interests, musicality, their love of Corgis – even the same face. Not surprising, as they are identical twins. Twins supposedly share just about everything, but in the Hickeys’ case, that goes so far as to include potential vocations to the priesthood.

Many people within the Diocese of Fort Wayne-South Bend may not realize that there is a set of twins studying at Mount St. Mary’s in Maryland, as the brothers are currently in separate years of formation. Johnathan discerned a year earlier than his brother, and is in 1st Year Theology, while Michael is in 2nd Year Pre-Theology. 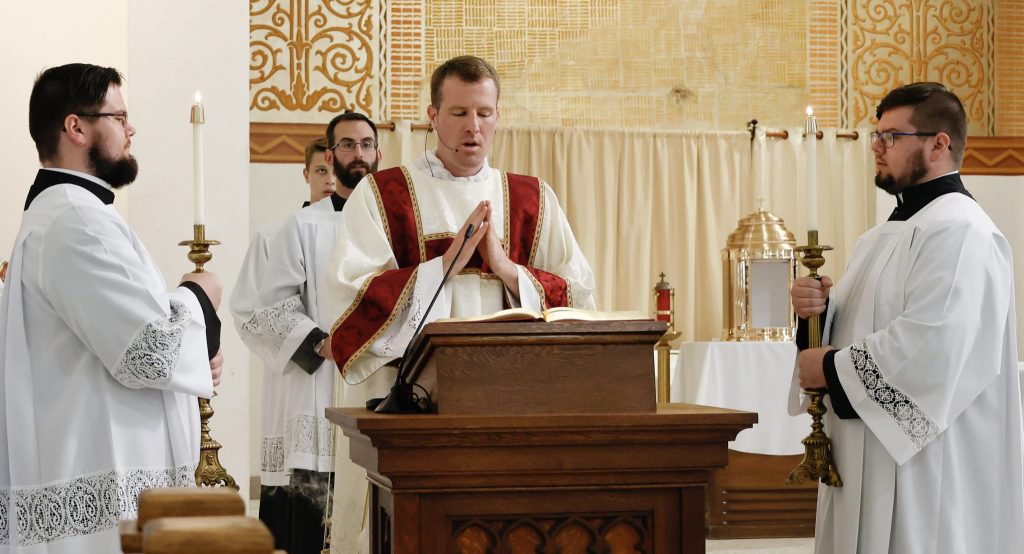 Like most twins, Johnathan, left, and Michael Hickey, right, share so many similarities that most people could barely tell them apart. Even their vocational paths merged closely to the point that the brothers are now both studying for potential vocations to the priesthood at Mount St. Mary in Maryland, with only a year of study separating them. — Jennifer Barton

With lives so closely intertwined, it is difficult to talk about one brother without mentioning the other. Johnathan shared that during the summer when he attended the Institute for Priestly Formation, he learned about the “I and we examen,” which teaches a person to contemplate their everyday language in that “it’s always supposed to be Jesus and you doing everything, and then paying attention to where it’s just me.” He stated that in his mind, he already uses that language, usually in conjunction with his brother. “We just did everything together.”

Looking back, both brothers remember wanting to be police officers from childhood. The “cool equipment” that police officers carry, the cars, the uniforms, the television show “Cops” – and most importantly, the inclination toward helping
others – stirred in them a desire to pursue a career in law enforcement. “I even still live this now as being able to help people, and it’s fitting going into priestly ministry, which is what you’re doing,” Michael commented.

In college, they had an inclination for studies that complemented the priesthood. The main differences in their paths were their college minors. Johnathan minored in philosophy and psychology; Michael in psychology and sociology. Both have stories of times they brought their Catholic faith into the classroom.

Their paths diverged again with their college internships, “and that’s where I kind of leapt into seminary as well,” Johnathan stated. His internships took him into the probation side of law enforcement. One year he helped with drug testing for male parolees, occasionally talking to those who tested positive for drug usage about their life situations and the choices they were making. “I think where I brought Christ into the probation was just the silent witness of praying for people and being like St. Joseph; just a silent, distant prayerful source right there.”

Both men had been fence-sitting in their priestly discernment, but it was in the midst of this internship experience that he realized he would never know if he had a calling to the priesthood if he didn’t at least give it a try, and approached Father Andrew Budzinski, the Vocation Director for the diocese as well as his parish pastor. After the twins graduated in 2020, Johnathan immediately entered seminary. Michael, however, after his internships in parole and with the campus police department, began working as a Public Safety Officer for Parkview Hospital. The hospital campus is located directly across from St. Jude Parish, which boasts a 24-hour adoration chapel.

“I ended up working night shift for about a year and a half and it was a blast. You see some crazy stuff. It was amazing, though.”

One particular encounter stands out in his memory. A woman was brought into the hospital in the midst of a psychotic breakdown, tightly squeezing her service dog. Everyone present tried to calm her, but she continued screaming and asking everyone if they were Catholic. When Michael answered in the affirmative, she asked if he would pray with her. He related, “She wanted to pray the Our Father, so we started praying that out loud, she calmed down. … That was the only thing that would calm her down, so I’m walking through the ER holding her hand, praying the Our Father out loud, and in the hustle and bustle of the ER, that’s something you don’t see. Kind of a calming presence.”

He then prayed the Memorare over her and she became peaceful.

Michael applied for a city police officer job, and though he passed the test, he didn’t get an interview. That was when he knew it was time to give the seminary a chance. “I felt like I was in the car, hitting the gas, hitting the brake, and pulling the emergency brake. It’s like I wasn’t going anywhere with discernment and that was the next logical step.”

With feet no longer on the brakes, the Hickey twins are cruising along the road to their vocations, enjoying seminary life and anticipating the milestone of ordination in a few years. They hope to put their criminal justice backgrounds to work in their future priesthoods.

Johnathan explained the link between criminal justice and priestly ministry. “There’s a huge need for Christ in this world and I can’t help but I definitely think Christ is … giving me this experience here of probation to just, God willing, if I’m ordained a priest, to look at prison ministry.”

His time working at the hospital with people with mental illness, drug addiction, and other heavy issues has prepared Michael to “respond to calls to help people literally at the worst day of their life. … And so being able to be that way that they can find Christ, I think that’s very helpful.” He spoke of how he often doused his hands with holy water and kept his rosary handy on those sometimes-dangerous night shifts.

While they are so similar they can nearly speak for each other, their service to God and the Church is vastly different. Johnathan said, “We tell this all the time: We don’t need two Michaels or we don’t need two Johns; God has – we’re each individuals for a reason.”

Priesthood is a fraternity, but the Hickey twins may take that brotherhood to a new and incredible level, to one day be able to call their birth brother a priestly brother as well.