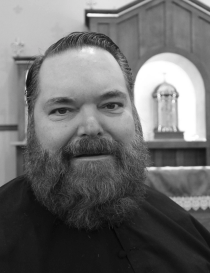 Through his 25 years of priesthood, Father J. Steele, CSC, has seen his life and ministry shaped by the people he has served. Originally from Alexandria, Virginia, Father Steele completed his undergraduate studies at Boston College and spent a year doing volunteer service before entering the Congregation of Holy Cross at Notre Dame. Sent to study for the priesthood at the Berkeley School of Theology in California, he received valuable formation in developing listening skills to successfully bring people of diverse opinions and backgrounds together to work toward a common goal.

Following his ordination to the diaconate in 1996, he was assigned to minister at St. Stephen of Hungary and St. Casimir parishes in South Bend. It was here where he discovered the richness of many traditional Catholic devotions and witnessed their importance in the life of the parish. He shared, “It was at St. Casimir’s that I first encountered Eucharistic Adoration. I had never seen a monstrance in use before or experienced Benediction. It just wasn’t something we had in seminary at the time. But the Polish and Hispanic people of the parish helped me learn about many liturgical customs and I saw how much the devotional life of the Church was at the heart of their faith.”

Father Steele was ordained to the priesthood the following year and continued to serve these two parishes on the west side of South Bend until 2000, when he moved back to the University of Notre Dame to serve as rector of Morrisey Manor, a men’s residence hall. During this time, he also served as chaplain to the Notre Dame Knights of Columbus Council, the Militia Immaculata and Notre Dame’s varsity swimming and diving team. He also helped coordinate the diocese’s first year participating in the national March for Life in Washington, D.C., serving as the chaplain on their inaugural bus trip.

In 2005, Father Steele was assigned to the Congregation of Holy Cross’ Office of Vocations at Moreau Seminary. Since he no longer had full-time chaplain assignments, he reached out to then-Bishop John M. D’Arcy to volunteer his services at local parishes in need of sacramental help. Bishop D’Arcy took him up on the offer and kept him busy with assignments at numerous nearby parishes, including at St. Patrick, Walkerton, St. Vincent de Paul, Elkhart, St. Dominic, Bremen and Our Lady of Guadalupe, Warsaw.

These experiences kindled in his heart a desire to return to parish life on a full-time basis. In 2009, he was assigned by his religious superior to serve at Holy Redeemer Catholic Church in Portland, Oregon, a parish that has been staffed by Holy Cross priests since 2002. Within the year, Father Steele spoke with his superior and asked to be loaned to the diocese of Fort Wayne-South Bend, to lead parishes that were underserved and in need of stability. This request was approved, and Bishop Kevin C. Rhoades gratefully received Father Steele, asking him to lead St. Joseph in LaGrange and Blessed Sacrament in Albion, communities that had endured some difficult years.

The rebuilding of these parishes involved both spiritual and physical growth, as Father Steele listened to the needs of his people and sought new ways to enhance their faith.

St. Joseph LaGrange underwent several renovations to better utilize their space, including enhancements to the church sanctuary, a large new entryway, eight new classrooms for religious education, an outdoor Marian shrine, a beautiful pavilion, a carport and a new rectory.

At Blessed Sacrament, Father Steele found the church to be a converted grocery store that the congregation had been worshipping in for 25 years. Previous attempts to enhance the grounds had not been successful, which left many parishioners hesitant to try again. Father Steele remained resilient, visiting the homes of 85 parishioners and sharing images of potential new building designs.

“The personal conversations made people feel valued and helped them to see that this could actually be a reality for their parish,” he said. “They responded very generously; the average household gift was probably between five and six thousand dollars. That’s a big commitment, but they loved their parish. Together we wanted to convince the diocese and the town that we want to be here and are here to stay!”

Many of the improvements at Blessed Sacrament and St. Joseph happened simultaneously. While these construction projects were not easy, Father Steele shared, “As we built the church, Christ made us more the Church than we were before. Even while there were moments when it seemed a new church would not be realistic, the people responded and were committed to seeing these projects through. Most of Blessed Sacrament’s construction was completed by its own parishioners. People of diverse backgrounds, even sometimes with language barriers, came together and collaborated to bring the project to completion. It was amazing to witness!”

In 2019, Bishop Rhoades reassigned him from St. Joseph to Pastor of Immaculate Conception in Kendallville, while remaining Pastor of Blessed Sacrament. In recent months, Father Steele has been preparing his next project for these parishes: developing Fraternis and Fidelis chapters to provide enhanced discipleship experiences for young men and women to grow in faith, maturity, fellowship and authentic purpose. After witnessing the success these programs have had at St. Elizabeth Ann Seton Parish, Father Steele invited individuals from his parishes to consider starting groups at Blessed Sacrament and Immaculate Conception. Twenty adult volunteers signed on as leaders and they are preparing to launch in August. The meetings will be open to anyone in the area who desires to participate. Father Steele exclaimed, “The Holy Spirit knows what He is doing. The Lord sets the agenda. We simply try to be attentive to His voice and respond to His call!”