“Amid the chaos of the sea, the storms of life, the Lord says to us as He said to the disciples: Take courage, it is I; do not be afraid.” Reflecting upon Sunday’s Gospel with joyful enthusiasm, Bishop Kevin C. Rhoades conveyed this message of Christian hope and perseverance to more than 4,000 pilgrims at the World Apostolate of Fatima Shrine on Aug. 13. 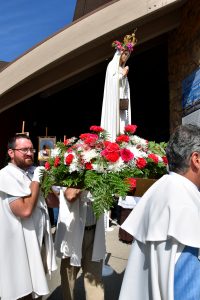 A statue of Our Lady of Fatima is carried in a rosary procession prior to the beginning of Mass Aug. 13 at the National Blue Army Shrine of Our Lady of Fatima in Washington, N.J. The Mass was celebrated in observance of the 100th anniversary of the Marian apparitions in Portugal in 1917. At left is Patrick Wheeler of St. John the Evangelist Parish, Goshen, who was among those asked to carry the statue during the procession. Over 4,000 people were in attendance. — Megan Pritchard, World Apostolate of Fatima, USA

“Where is Jesus today when we or the Church are struggling or in danger?” Bishop asked, and continued: “He is praying at the right hand of the Father! But He also comes to us. He continues to walk on the water towards us. And He reaches out His hand to us, as he did to Peter, to save us. All we need to do is have the faith of Peter to grab our Lord’s hand and say: ‘Lord, save me.’ Such words aren’t just a cry of desperation, but a prayer of faith that acknowledges Jesus as Lord, as God, who has the power to save us, to lift us up from death and ultimately raise us to eternal life with Him.”

Throughout Our Lady of Fatima’s apparitions to the Portuguese shepherd children in the summer of 1917, she asked that they return to see her on the 13th each month, that they pray very much — especially the rosary — for worldwide peace and conversion, and that they make of everything they could a sacrifice offered in reparation for sins committed against Jesus’ Sacred Heart and her Immaculate Heart. Speaking on the 100th anniversary of what should have been the fourth time the children encountered Our Lady, Bishop Rhoades highlighted the steadfast courage and heroic virtue displayed by Sts. Jacinta and Francisco Marto and Servant of God Lucia dos Santos. His words held particular significance on this date because Aug. 13, 1917, was the one instance the children were prevented from encountering Our Lady due to the anti-Catholic prejudice and malicious actions of the local civil administrator, Arturo de Oliveira, who kidnapped, imprisoned and threatened the children with death if they did not reveal details about Our Lady’s messages or recant their stories altogether. 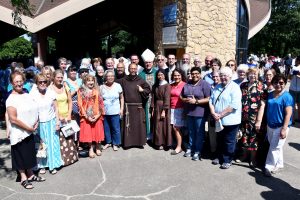 “I think this event demonstrates the heroic sanctity that the Church requires for canonization,” Bishop Rhoades remarked. “The children of Fatima had the kind of faith and courage we see in the martyrs of the Church. Were they afraid? Yes. But fear did not overcome their faith. They were willing to suffer and to offer their sufferings to Jesus and Mary for the salvation of souls. In the prison, Francisco said to his sister Jacinta: “Don’t cry, we can offer this to Jesus for sinners.” Jacinta then added: “and also for the Holy Father, and in reparation for the sins committed against the Immaculate Heart of Mary.” When the adult prisoners tried to convince them to just tell the administrator the secret, or refute the story, and they’d be freed, little Jacinta said, “Never, I’d rather die.”

He continued: “They kept the faith. Their witness moved the adult prisoners so much that they got down on their knees to pray the holy rosary with them. These were hard men whose hearts were softened by the faith of Francisco, Jacinta and Lucia. We can say that the Fatima children evangelized in the prison in those few days that they were held captive.”

Christ confirmed to Peter the depth of his love and his constant prayerful presence alongside the church. Similarly, the shepherd children knew that although they could not travel to see Our Lady in person, Mary was still there praying and supporting them throughout the terrifying ordeal they faced. “Our Lady eventually appeared to them when they were free, on Aug. 19th,” Bishop Rhoades reminded the crowd. “And on that day, she said to them words similar to what she had said in the earlier apparitions: “Pray, pray very much, and make sacrifices for sinners, for many souls go to hell, because there are none to sacrifice themselves and to pray for them.” She also promised that in October she would perform a miracle for all to see, so that all would believe. Bishop Rhoades concluded, “It is good to remember today the prayer of Francisco in the prison cell: “Oh my Jesus, this is for love of you and for the conversion of sinners,” and the words added by Jacinta: “And also for the Holy Father, and in reparation for the sins committed against the Immaculate Heart of Mary. May Our Lady of Fatima and the courageous children of Fatima inspire us and pray for us, that our faith may not falter and that we, like them, will bear witness to Jesus even in the midst of trials and suffering!”

Individuals and families traveled from near and far to take part in the various festivities at the shrine for the commemoration of this fourth apparition of Our Lady at Fatima. Throughout the morning the sacrament of reconciliation was available, a communal rosary and Marian procession were held and Father Chris Alar, MIC, director of the Association of Marian Helpers in Stockbridge, Massachusetts, spoke about the importance of Marian consecration united with the devotion to Divine Mercy. Following Mass, eucharistic adoration was offered, followed by a procession of the Blessed Sacrament around the shrine.

Thirty men and women from throughout the diocese, as well as a few from Ohio, embarked on a 10-hour venture to honor Our Lady and stay overnight at the shrine. Jan Scher, a parishioner of Sts. Peter and Paul, Huntington, and coordinator of the trip from the Diocese of Fort Wayne-South Bend, revealed, “Fatima is my favorite shrine. I grew up visiting shrines with my family; it is so necessary for us and our children to know stories about them as a part of our Catholic heritage,” she said. In the pilgrimages she now leads, leaders and participants pray the rosary. “The rosary is the peace plan from heaven, it is so important. All Catholics need to respond to her call, which leads us to her son; to our eternal, ultimate goal.”

Other pilgrims expressed their joy at witnessing the beauty of the liturgy and seeing so many in attendance. Mary Batterson and Linda Leist, also parishioners of Sts. Peter and Paul, Huntington, remarked, “It is so amazing to be this close to our Blessed Mother and her son; it has been a heavenly and uplifting experience.” They also shared how Mary has been especially present in their lives throughout this year, through the rosary.