ABU DHABI, United Arab Emirates (CNS) — In an officially Muslim nation where Christians are welcomed as guest workers and free to worship, Pope Francis urged leaders of the world’s main religions to embrace a broader vision of freedom, justice, tolerance and peace.

Addressing the interreligious Human Fraternity Meeting in Abu Dhabi Feb. 4, Pope Francis said all those who believe in one God also must believe that all people are their brothers and sisters and demonstrate that belief in the way they treat others, especially minorities and the poor.

The Human Fraternity Meeting, which brought together some 700 religious leaders from Muslim, Christian, Jewish, Buddhist, Sikh, Hindu and other religious communities, was a centerpiece of Pope Francis’ visit. The meeting was sponsored by the Abu Dhabi-based international Muslim Council of Elders and was promoted as a key part of the UAE’s declaration of 2019 as the “Year of Tolerance.” 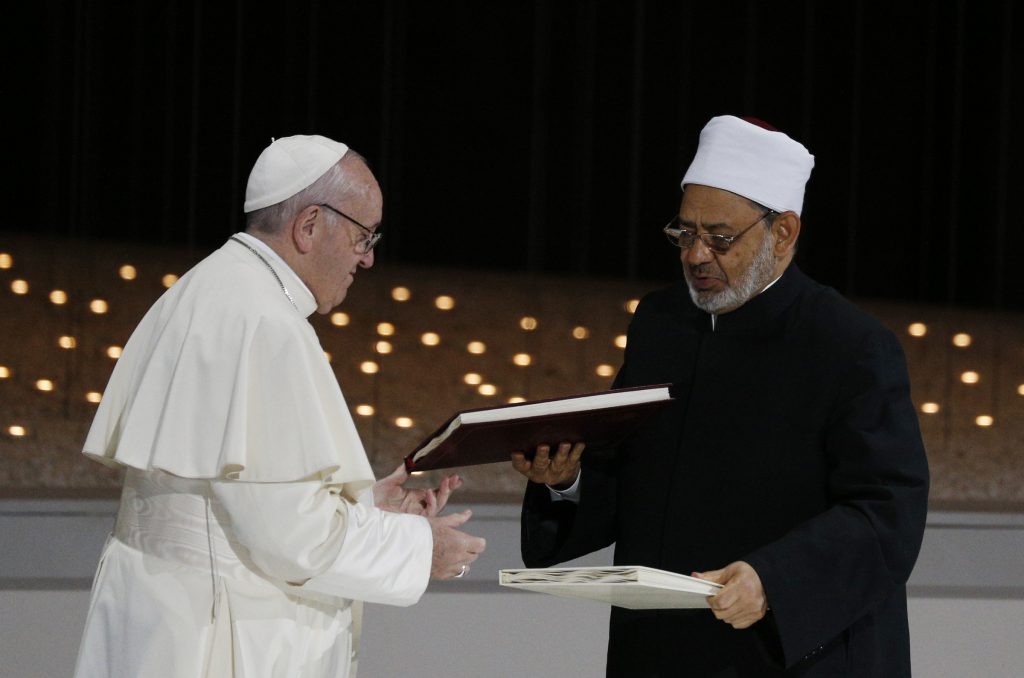 In the presence of Abu Dhabi’s crown prince, Sheik Mohammed bin Zayed Al Nahyan, and Egyptian Sheik Ahmad el-Tayeb, the grand imam of al-Azhar and chair of the Muslim Council of Elders, Pope Francis thanked the emirates for the respect and tolerance shown toward Christians, but later in his speech he called for more.

“A justice addressed only to family members, compatriots (and) believers of the same faith is a limping justice; it is a disguised injustice,” Pope Francis told the gathering.

“We cannot honor the Creator without cherishing the sacredness of every person and of every human life: Each person is equally precious in the eyes of God,” the pope said.

Some 80 percent of the people living in the United Emirates, including almost all the Catholics, are foreign workers who have no right to citizenship, but are a key part of the country’s booming economy.

While they are free to attend churches, which have been built on land donated by the emirates’ ruling families, they must exercise care lest they be accused of proselytizing. The government also closely controls the practice of Islam to block the influence of groups it considers politically dangerous or related to terrorism.

Sheik el-Tayeb, speaking before the pope, told his fellow Muslims to “embrace your Christian brothers and sisters … there are special bonds between us. Even the Quran speaks of these bonds.”

The imam insisted all those who believe in God must believe in the obligation to respect human life, which God created, and, he said, “the name of God must not be used to justify violence. God did not create us to cause suffering.”

Sheik el-Tayeb also insisted that Christians should be treated “as citizens with full rights.” 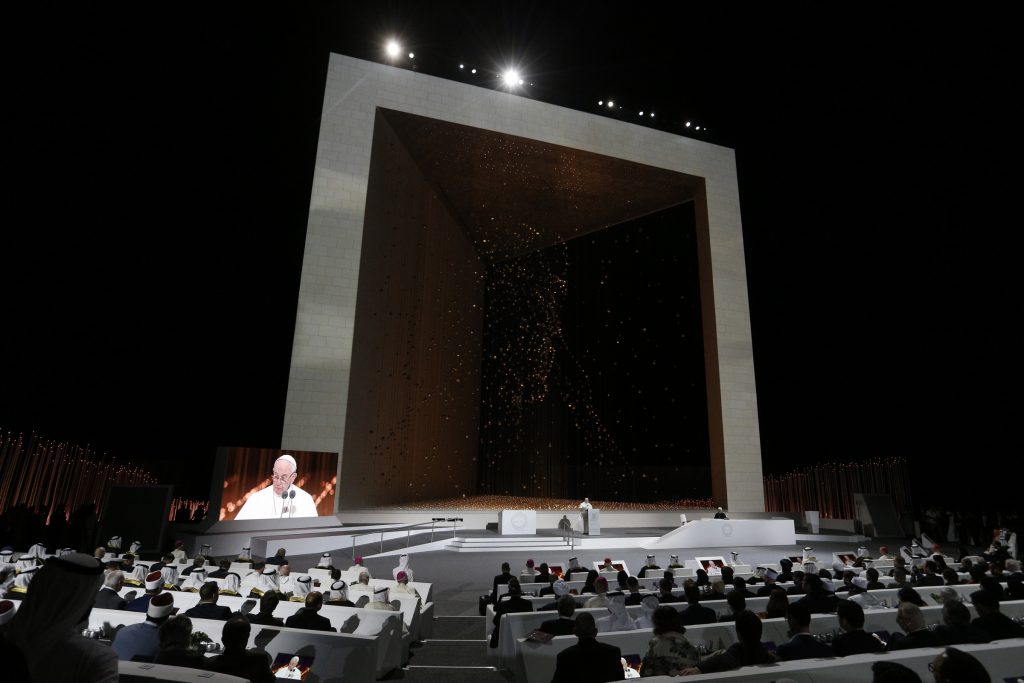 Religious freedom, Pope Francis told the gathering, “is not limited only to freedom of worship but sees in the other truly a brother or sister, a child of my own humanity whom God leaves free and whom, therefore, no human institution can coerce, even in God’s name.”

Straying slightly from his prepared text, the pope said that differences of sex, race and language are all signs of “God’s wisdom” and must never be a pretext to limit a person’s freedom.

Followers of every religion continually “must be purified from the recurrent temptation to judge others as enemies and adversaries,” he said. Instead, they must strive to adopt “the perspective of heaven,” of God who does not discriminate between his children.

“Thus, to recognize the same rights for every human being is to glorify the name of God on earth,” the pope said. “In the name of God the creator, therefore, every form of violence must be condemned without hesitation, because we gravely profane God’s name when we use it to justify hatred and violence against a brother or sister.”

But Pope Francis broadened that appeal as well, urging religious leaders to work together at “demilitarizing the human heart” and opposing all war.

“War cannot create anything but misery,” he said, and “weapons bring nothing but death.”

Pope Francis said he was not simply talking about war in theory, because “its miserable crudeness” and “its fateful consequences are before our eyes. I am thinking in particular of Yemen, Syria, Iraq and Libya.”

The war in Yemen began in March 2015. The international coalition supporting the government troops there is led by Saudi Arabia, with strong support from the United Arab Emirates, and the Houthi rebels they are fighting are supported by Iran. Both sides have been accused of serious violations of humanitarian law, including the indiscriminate killing of civilians.

In early December, David Beasley, executive director of the World Food Program, called Yemen “the world’s worst humanitarian disaster in 100 years.” Half of Yemen’s 28 million people are on the brink of starvation, and the country is suffering from the worst cholera epidemic in modern history.

“Together, as brothers and sisters in the one human family willed by God, let us commit ourselves against the logic of armed power, against the monetization of relations, the arming of borders, the raising of walls, the gagging of the poor,” the pope said. “Let us oppose all this with the sweet power of prayer and daily commitment to dialogue.”

The meeting ended with Pope Francis and Sheik el-Tayeb signing “A Document on Human Fraternity for World Peace and Living Together.”

Muslims and Catholics “of the East and West,” it said, “declare the adoption of a culture of dialogue as the path; mutual cooperation as the code of conduct; reciprocal understanding as the method and standard.”

“We, who believe in God and in the final meeting with him and his judgment, on the basis of our religious and moral responsibility, and through this document, call upon ourselves, upon the leaders of the world as well as the architects of international policy and world economy, to work strenuously to spread the culture of tolerance and of living together in peace; to intervene at the earliest opportunity to stop the shedding of innocent blood and bring an end to wars, conflicts, environmental decay and the moral and cultural decline that the world is presently experiencing.”

According to the Vatican press office, the pope and the imam also “inaugurated” the cornerstone for a church and mosque that will be built alongside each other in the United Arab Emirates; the UAE government will launch an international competition for the design.

Before going to the interreligious meeting, Pope Francis had visited Abu Dhabi’s Sheik Zayed Grand Mosque, which can host more than 40,000 worshippers at a time and is one of the largest mosques in the world.

At the mosque, which was finished in 2007, the pope met privately with the Muslim Council of Elders for about 30 minutes, according to Alessandro Gisotti, interim director of the Vatican press office. “The importance of a culture of encounter to reinforce the commitment to dialogue and peace” was underlined during the meeting, he said.

Earlier in the day, at the new Presidential Palace, the pope was formally welcomed to the United Arab Emirates in a ceremony that included a flyby of air force jets trailing yellow and white smoke, the colors of the Vatican flag.

Signing the guestbook, the pope wrote: “With gratitude for your warm welcome and hospitality and with the assurance of a remembrance in my prayers, I invoke upon Your Highness and all the people of the United Arab Emirates the divine blessings of peace and fraternal solidarity.”