The parish bumper stickers say it’s “Fort Wayne’s Best Kept Secret,” and for many people it just might be. In Fort Wayne’s only traditional Latin Mass parish, Sacred Heart, a lot is going on and even more seems to be bubbling up.

One draw to this gem of Fort Wayne is the Latin Mass itself, which continues to attract more and more young people. National Catholic Register and the United Kingdom’s Catholic Herald both recently featured full-length, statistic-laden articles drawing attention to the fact that youth are disproportionately attending the Latin Mass parishes. Sacred Heart is no exception, with its growing number of parishioners. As the Catholic Herald said, it looks like “the new kids are old rite.” 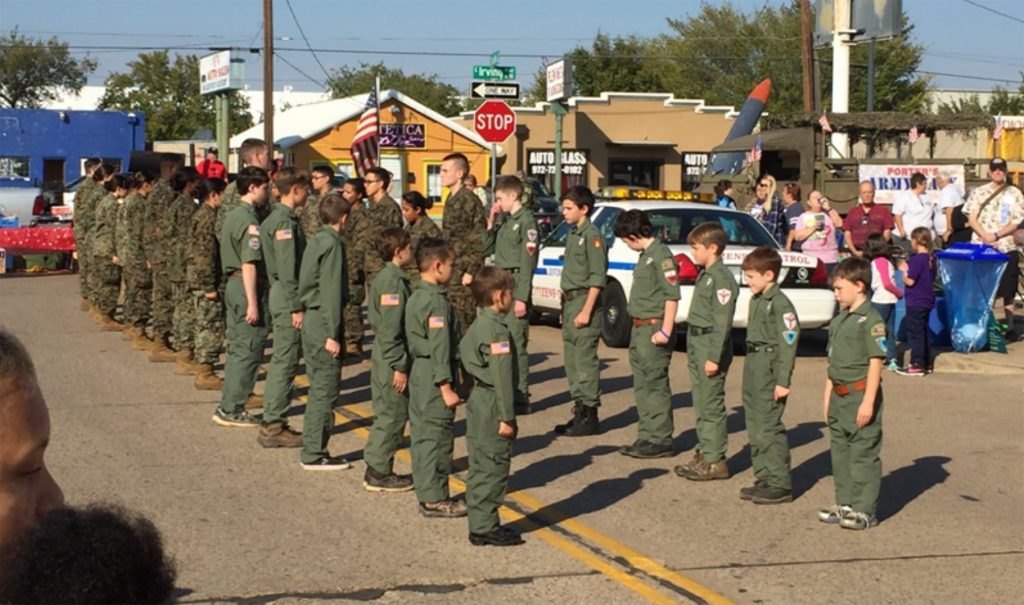 The Troops of St. George No. 316, at Sacred Heart Parish in Fort Wayne, is an apostolate for young men and their fathers. It focuses on establishing a personal desire for holiness, with sainthood as the goal. — Provided by Benjamin Becker

With the influx of new parishioners, a number of new devotional groups have started at Sacred Heart. The Militia of St. Joseph, “The Terror of Demons,” focuses on spiritual combat and male spirituality, while the Handmaids of St. Joseph caters to women of the parish. The Young Women’s Sodality meets regularly, and the newest addition to the parish’s laity programs has been the long-anticipated Troops of St. George young men’s program.

In the works for over a year, Troops of St. George No. 316 was nearly the first in the state, coming in at a close second to a parish in Dyer. With registration being open for only six weeks, the program has already accumulated 36 registered members and is adding boys weekly. As the only Troops of St. George chapter in the region, it is drawing devout Catholics from as far away as Ohio and Michigan.

Troop No. 316 was named after Revelation 3:16, which reads: “So, because you are lukewarm, and neither cold nor hot, I will spew you out of my mouth.” Its sole purpose is to set young men and fathers on fire for Christ and the holy mother Church.

The Troops of St. George reminds its members to be serious about the prospect of eternity. They dress in military-style, olive drab green uniforms, black boots, boonie hats and tactical attire and take as their maxim “Parati Semper,” which means “Prepared Always,” taken from the first pope, St. Peter, in Scripture. Members of the Troops strive to live this way, as soldiers of the great martyr St. George, “the Dragon Slayer” — prepared always in fervent love of Christ to give their lives, actions and will to Christ in the battle for souls.

While the Troops of St. George looks like other scouting-type organizations, it’s very different and its members appreciate that. It’s an official Catholic apostolate, founded in 2013, and the program is seeing tremendous growth, especially amid national changes to other scouting-type programs.

For the young men ages 6-18 and their fathers, the Troops of St. George apostolate aims to use the outdoors as a canvas and the sacraments as the path to light the way for the formation of holy Catholic men and boys. Whether called to the vocation of the priesthood, the religious life or that of holy fatherhood, the fathers and sons take a prayerful pilgrimage together to fulfill Christ’s desire for them to grow in virtue and in their Catholic faith. Their goal is spiritual, mental and physical development into holy Catholic priests and fathers. They experience Masses on mountaintop vistas, pray the rosary with other men around fire pits in the freezing cold, catch fish for Friday meals by fly fishing for trout and go to confession with priests while kneeling on moss deep in the woods. Fathers teach their sons archery, rock climbing, hunting, marksmanship, fishing and many other adventure survival skills and infuse the experiences with Catholic virtues, fostering a love for the Eucharist, the Mass and the priesthood; and a reverence for the sacrament of holy matrimony. They actively support their local parishes, priests, bishop and community by being available for works of mercy and service.

This program focuses on the answer to what Pope St. John Paul called “The Culture of Death” by asking the Holy Spirit to cultivate leadership from strong, bold courageous priests and fathers, beginning with the seed of faith in the heart of young men.

To learn more about the Troops of St. George No. 316, visit www.troopsfw.org.